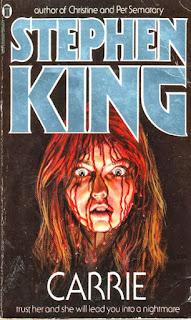 Spoilers may occur. This review is intended for those who have seen the film(s) or know the book.

I was intending to share this post in October to coincide with Halloween. Better late than never.
A coming of age horror classic. It was Stephen King’s debut as a published novelist. The paperback became a bestseller. In 1976, Brian de Palma directed the movie with Sissy Spacek as the lead, which is still considered among the best King film adaptations. The novel is relatively short at only 200 pages. Written in an epistolary form, using newspaper clippings, transcripts of court depositions, passages from science journals, letters, and excerpts. This fragmentary approach works surprisingly well.

You can interpret the novel autobiographically as Stephen King dealing with traumatic experiences from his youth. Although he insists Carrie is based on a composite of two girls he observed while attending grade school and high school.

Carrie White is a teenage outsider and the story about bullying and teen rebellion feels timeless. The other girls are so cruel, holding her head under water when they swim at summer camp, placing a grass snake in her shoe at school, putting peanut butter in her hair. The harsh words are just as bad.

Interesting how King at one point puts himself in the shoes of the bully, who is in denial. On page 11 she pictures a neon sign in her mind saying “we don’t mean any harm”. I wish King would have taken this aspect a little further.

Carrie’s determination and stubbornness to stick it out for years is admirable. Others would have changed school. Yet King doesn’t just portray her as an infallible victim. Carrie is capable of cruelty. A small boy calls her names and afterwards she knocks over his bike and feels happy about it. Later in the novel she takes revenge to another level.

Carrie's mother Margaret White is too controlling and protective. Carrie is becoming an adult and answering back. Calling her mother a whore for giving birth to her and her mother locks her in a closet. Another time she throws tea at her daughter. Margaret seems to be losing her mind. Carrie’s mother was allegedly a victim of a rape and Carrie is quite frightened of her. Margaret is fanatically religious and domineering, wanting Carrie to pray and stay away from boys. Carrie is fighting for her independence and the right to make her own choices. 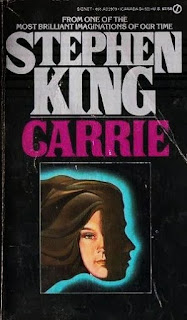 Carrie has telekinetic powers and reading made me curious if it’s simply hocus pocus or if there are any actual cases of it happening. Telekinesis is an alleged psychic ability allowing a person to move objects without physical interaction.

Like a superhero Carrie has to learn to use her abilities for good rather than revenge. Like we all do, try and do good instead of bad. You can’t blame Carrie for wanting to retaliate though. Considering all the pain she has put up with it feels justified. Anyone who was ever an outcast or was bullied may feel a kinship with her. The story reminds us we are all capable of terrible acts, whether you are a bully or a victim, and no matter if you have special powers or not. I see the book as a cautionary warning.

Clearly the prom scene is the most iconic part. I think the movie pulled it off in a slightly more intense way, although King does a good job of describing Carrie’s discomfort with her body and being among those who tease her, and the aftermath of the incident is more fleshed out in the book.

The novel is raunchier than the movie and was considered controversial at the time. The story could be taken the wrong way, encouraging violence, and has a negative view of religion. When it came out was one of the most frequently banned books in school libraries.

The book isn’t perfect, a bit implausible a 16-year-old would not know what her first period is or what a tampon is for, especially at that late age when other girls at school already would have talked about it. Even more implausible, her mother thinks the pregnancy is cancer. Even for a brainwashed religious fanatic that is hard to believe.
I could have done without the animal killings when the group go and collect the blood. That scene was wisely not included in the movie.
My interest in the book lessened in the middle section when the teenagers are preparing for the prom and so forth. The supporting characters behave like regular teenagers do, but are difficult to distinguish from each other as they behave similarly. I couldn’t tell them apart and this is especially noticeable if you put the book down and return to it a week later.
The conclusion of the movie is flashier with the house collapsing, but only fleetingly taps into the suffering of those left behind. Whereas the book goes for a psychologically haunting ending with the townspeople traumatised and a warning that the events could repeat without proper action taken.

Other reviewers describe the story as a modern day “universal fairy tale”. The menstrual blood signifying coming of age and thus leading to mother-daughter rivalry. Another wrote that King “expertly captures the daily fright fest that is every teenage girl's nightmare--high school.”

Despite my minor quibbles, the novel still holds up well, especially the beginning and ending. Deserves its cult classic status.


Have you read anything by Stephen King? What did you think of Carrie the book/film?
Posted by Chris at Tuesday, December 15, 2015