Trainspotting – looking back and looking forward 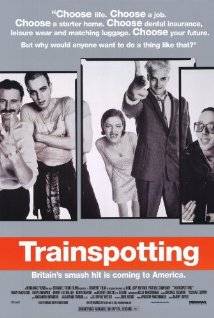 This is an article by writer Helen Sanders.

As the twentieth anniversary of iconic British movie Trainspotting looms ever closer it seems like the ideal time to revisit this stand out cinema experience. With media speculation aplenty about the prospects of a ‘Trainspotting 2’ production we also take a closer look at what this eagerly anticipated flick might offer.

With its gritty Scottish inner city backdrop, brutally realistic dialogue and outstanding music soundtrack, Trainspotting has long been heralded as a once in a generation show. Generally accepted as the launch pad for respected actor Ewan McGregor’s big screen career, this carefully constructed insight into the lives of five Edinburgh based friends was one of those movies which made people sit up and take notice.

Directed by the now major league Danny Boyle and adapted from the same named novel penned by Irvine Welsh, Trainspotting urged its viewers to think about their life choices. Central character Mark Renton’s opening lines – equally famous as the movie- were powerful in their simplicity:

“Choose life. Choose a job. Choose a career…But why would I want to do a thing like that?”

As the rest of the plot unfolds, it becomes painfully evident why most of us would make these choices, as we see how Renton’s drug fuelled existence spirals further out of control.

The movie itself doesn’t fit neatly into a particular genre, an achievement which only adds to its flair. Dramatic in places with the darkest of comedy and even a love story of sorts thrown in, this cocktail of tears, laughs and sharp intakes of breath is only matched in its variety by the band of brothers who make up the central cast.

Mark Renton forms the backbone to the group of five friends. An established heroin addict much of the movie revolves around his fairly half-hearted attempts to kick the habit. With clever directing we are immersed in a number of incidents involving the friends. Of course these incidents are far removed from what most of us would consider normal, with Renton’s stand out moments including desperately rescuing a suppository from a filthy pub toilet to support his habit and being held captive by his concerned parents who are determined to get him off heroin.

Renton is not alone in his exploits- Trainspotting is anything but the Ewan McGregor show. His four friends are equally engaging and deliver stellar performances throughout. Tommy, played by Kevin McKidd who is more recently known for his role as Dr. Owen Hunt in Grey’s Anatomy, is perhaps the most desperate character. Starting out determined to stay away from drugs and firmly focused on keeping fit, Tommy resorts to heroin use following the end of his relationship with girlfriend Lizzy. Tommy subsequently contracts HIV and dies, leading the movie to perhaps its only moral standpoint.

Spud’s character brings some welcome comedy to the movie. Portrayed by Ewen Bremner, Spud makes bad decision after bad decision but gives us plenty of laughs in the process. Easily suggestible, Spud is only too willing to go along with whatever the friends have in mind, a quality which consistently lands him in trouble. Almost childlike in his innocence, Spud is entertaining with highlights including his hilarious interview for a sports centre job where he claims to find, “My pleasure in other people’s leisure!”

Sick Boy (Jonny Lee Miller) starts off the movie as something of a wide boy sporting some serious swagger. Seemingly able to control his drug taking much better than any of his friends, he uses this ability to annoy them – particularly his closest ally Renton. His character becomes more deeply involved in criminality, particularly after the death of his child (due to neglect). Sick Boy is transformed into a less likeable, more ruthless and increasingly self absorbed version of himself – once again hardly an advert for drug taking.

Finally we come to Begbie, the only non heroin user in the group. A violent alcoholic, Begbie seems to be perpetually on the brink of another explosion of aggression. Robert Carlyle, despite being slightly built, conveys the power of a heavyweight in his ‘busting with bravado’ Begbie. Respected by the others’ parents due to his anti-drugs stance, he is nevertheless the least appealing of the Trainspotting bunch, picking on innocent bystanders to satisfy his need for violence.

Trainspotting certainly had its critics, particularly those who said it glamorized drug taking, but in truth there is little glamour in the movie. For the most part it has been recognized as an incredible cinematic achievement – showing the pragmatic reality for a group of heroin users of that time. Its cult following has naturally lead to calls for a sequel, something which was initially strongly resisted by Trainspotting’s cast and creator. Rumors abound about why it has taken so long but it now seems that Trainspotting 2 will become a reality. With Ewan McGregor, Jonny Lee Miller and Robert Carlyle already said to have signed up, filming is expected to start in January next year. Believed to be loosely based on the literary sequel, ‘Porno,’ the film will pick up on the original characters’ lives ten years after the original Trainspotting story ends. With the cast now twenty years older, Danny Boyle feels they are finally able to accurately portray ravaged heroin users with ten more years under their belt.

Hope you enjoyed reading Helen's post! Have you watched Trainspotting (1996)? What did you think? As always, comments are welcome
Posted by Chris at Monday, September 07, 2015