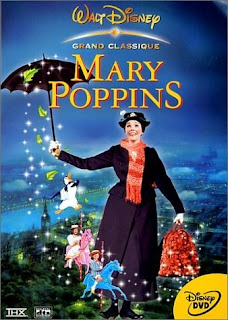 The fantasy elements can be interpreted as happening in the children’s imagination. Mary Poppins is the new nanny and encourages play, while the kid’s father is in favor of adult virtues such as purpose, discipline and learning about real life. I loved the scene when Mary pulls objects out of her magical bag of tricks, which any child would love, the film definitely leans towards play as important and inspiring.

Great special effects for the time it was made. Animation and live action is combined, the animated animals sing together with Mary Poppins and Bert. Although it was odd during the song and dance that Bert and Mary seem to forget about the children for a while. Even though Bert (Dick Van Dyke) was my least favorite character due to his annoying happy face, his dance with the penguins is a highlight of the movie and impressive from a technical standpoint.

The characters are exuberant the whole way, even when I began to tire during the middle part, involving the laughing uncle, bird lady, and visit to the bank. It’s a long film at two hours and 20 minutes, and maybe some of that middle section could have been cut. The story picks up again when they go up the chimney, and the smoke staircase is fun. The London rooftop scenes are spectacular, especially for the view over the capital.

A Disney musical, the reasons to watch are for the groundbreaking visuals, memorable sing-along music, and feel-good factor. Ideal to watch together with the family and children of your own. The iconic soundtrack contains classics such as Chim Chim Cher-ee, A Spoonful of Sugar, Supercalifragilisticexpialidocious, and Let's Go Fly a Kite.

With most of the film, the reasons for doing things remains unclear, about just having fun, and attempting to get the dad to see the world differently. The latter is a theme that will never get old.

I was surprised Julie Andrews’ character Mary is quite similar to her role in The Sound of Music (1965). I prefer the 1965 movie for the story, but both films have amazing soundtracks. If I had discovered Mary Poppins as a 7-year-old, I'm sure my enthusiasm for it would have been stronger. I wasn't really the right age group to see it for the first time.

I guess now I am able to watch the Tom Hanks film Saving Mr Banks (2013), which is about the making of Mary Poppins.

Will be interesting to see which direction the upcoming reboot goes in, word is Emily Blunt is rumored to play the lead in the new Mary Poppins. Wonder why it took so many years to make a follow-up?

Favorite quote: "I wouldn't stay in this house another minute, not if you heap me with all the jewels in Christendom!"


Agree or disagree? Have you watched Mary Poppins (1964) and what did you think? Which is your favorite film starring Julie Andrews?