New Bond song Writing's On the Wall by Sam Smith 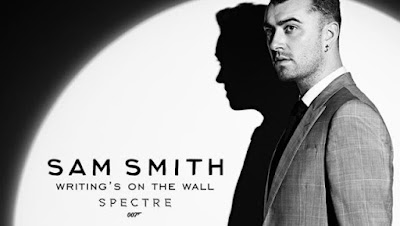 In a weaker era for popular music which the 2010s is I suppose you have to expect a weaker Bond song. I've played Writing's On the Wall by Sam Smith a few times in the last couple of days and it's not growing on me. I wish they had picked another singer such as Lana del Rey, her powerful voice is a far better match.

Sam Smith's high pitched vocal performance seems wrong for a film about a macho action hero like James Bond. He told NPR. “Writing’s on the Wall” is supposed to be from Bond’s perspective—“I wanted a touch of vulnerability from Bond, where you see into his heart a little bit”. Perhaps in Spectre (2015) we will see an emotionally vulnerable 007.

Unfortunately the new song is quite annoying because of the vocal delivery. Sam Smith was selected because his debut album In The Lonely Hour (2014) was a big international chart success.

If you go online, the theme has its fans, yet many were underwhelmed. BBC entertainment correspondent Colin Paterson said it was "good enough, but not a classic". What do you think?

Email ThisBlogThis!Share to TwitterShare to FacebookShare to Pinterest
Labels: Songs from 2015