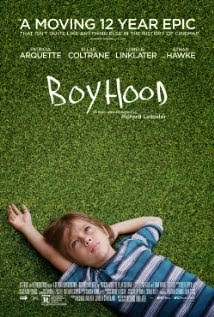 Boyhood (2014)
I was captivated from beginning to end, despite a running time of three hours. Even though I wasn't a kid in the same era that the characters are, it's still my favorite film of 2014 so far. The story could easily have felt uneven because the filmmakers and actors filmed this over so many years, but it somehow all fits together into a cohesive whole, and that to me is a sign of good directing and editing.
Before Sunrise is still my favorite by the director. I'd rank Boyhood somewhere among Linklater's top 10 films, maybe even top 5. Time will tell if his latest holds up to rewatching.
Rating 8.5/10

Night Moves (2013)
The performances are spot on, feels realistic for the most part, and raises important questions about responsibility of actions. The weakness for me is a running time of 112 minutes. The filmmakers could easily have told the same story in 90 min (or less). Still, I'd probably rank Night Moves second behind only Wendy and Lucy, with Meek's Cutoff and Old Joy 3rd and 4th.
Rating 7/10

Blue Ruin (2013)
Like Blue is the Warmest Color, there is blue in almost every scene. The narrative is a simple one of revenge. What makes the story stand out is the main character is not a trained killer. He's a bum, actually, without the physical or technical skills to go on a revenge mission. A fairly realistic, ok thriller, done on a smallish budget, with mostly unknown actors.
Rating 7/10

Tom at the Farm (2013)
Held my interest despite the implausible situation that he would stick around so long at the farm. Most would just have got the hell out of there!
Rating 7/10

Troubled Water (2008)
Underrated Norwegian/Danish drama, which deserves a bigger audience. Directed by Erik Poppe, About secrets and forgiveness. Very good performances by the lead actors. A powerful film that still lingers in my mind a week later.
Rating 8/10

Bottle Rocket (1996)
A fun and entertaining debut feature by Wes Anderson. Maybe I'm wrong, of all his films, this one feels the most realistic. As with the directors other films, he is a wizard at putting music together with scenes, in this case Anthony running back to the motel with the song Alone Again Or by Love.
Favorite quote:
Grace: “When are you coming home?” Anthony: “Grace, I can’t come home, I’m an adult”
Rating 8/10

The Navigator (1924)
Not quite reaching the heights of Buster Keaton’s best comedies. Still a pretty funny and sweet movie aboard a ship lost at sea. He has a female passenger with him, and it’s about their survival. The ghost was a highlight, and the underwater scenes are technically impressive for 1924. The ending is too far-fetched.
Rating 6.5/10

Mutiny on the Bounty (1935)
Great performances by Charles Laughton and Clark Gable, and their tussle at sea creates a lot of tension.
Rating 8/10

Sylvia (2003)
I was under the impression Sylvia Plath was a bigger author than her husband Ted Hughes, that is not the case in the film.
Plath’s famous work The Bell Jar isn’t mentioned until 80 minutes into the movie. Wasn’t aware her poem collection Ariel is one of the most celebrated and widely read books of poetry of the 20th century.
The film feels a bit simplistic and one-note, I’m sure there was more to the Ted Hughes-Sylvia Plath marriage than simply Sylvia’s jealously.
Rating 6/10

Clue (1985)
Based on the board game Cludeo(Clue in north America). you could describe the movie as a dialogue-driven whodunit with comedy elements. A clever mystery that kept me guessing, yet I didn’t really care about who lived or died, and was only mildly interested in who the guilty party was. For me, the multiple ending approach was just too confusing. A few familiar faces make up the ensemble cast such as Christopher Lloyd, Tim Curry and Lesley Ann Warren.
Rating 6/10

Sympathy for Mr. Vengeance (2002)
First part of the Park Chan-wook’s vengeance trilogy. (2003's Oldboy is the second part of trilogy)
The director has a real talent, beautiful angles, lighting and tracking shots. The kidnapping story is good, the scenes by the lake are especially vivid in my memory.
Rating 8/10

Sympathy for Lady Vengeance (2005)
Part three of Park Chan-wook’s vengeance trilogy. My least favorite of the three films. Again, as with the director’s other work, every frame is handled so well visually. The opening credits especially stood out. However the chronology is messy and jumps around quite a lot so that it was tough to follow what’s going on at times.
Not as memorable as the first two installments in the trilogy. What stayed with me was the fat female rapist in prison, and the main character’s red eye shadow. There’s also a dream sequence set in a snowy environment where a man has the body of a dog which was unlike anything I’ve ever seen before.
Shares quite a few similarities in terms of structure with Sympathy for Mr. Vengeance (2002), and didn’t feel as groundbreaking as the previous two installments.
Rating 6/10

The American (2010)
Slow-building assassin thriller starring George Clooney. The cinematography is well-done, especially after dark with its yellowish nighttime light, and the mist drifting across the Italian village. You would expect this from director/photographer Anton Corbijn. Clooney’s character is very vague and we know little about his past, he plays the paranoid, evasive womanizer quite well. Unfortunately his character doesn’t come across as an interesting person, so all the concealment feels like a gimmick to keep the film moving.
While decent enough, I wouldn’t call the film a game changer, as it’s merely content to imitate other assassin thrillers such as Day of the Jackal. The only surprise was the ending. I love the poster, but it doesn’t sell the film well, since there are only a couple of action scenes.
Rating 6/10

Good Night, and Good Luck (2005)
Having noticed praise for the film in the blogosphere, and seeing was nominated for 6 Oscars, I was expecting an above average movie. The filmmakers do a fine job of recreating the time it was set, and I can appreciate the events it depicts are historically important. Yet I could summon little enthusiasm for the history lesson, which I found quite dry and emotionless. I find it overrated.
Rating 5/10

Michael Clayton (2007)
Same reaction as Good Night and Good Luck, I just didn’t like any of the characters, who to me are cold. The storytelling was quite confusing. Bothers me when Brits (in this case both Tom Wilkinson and Tilda Swinton) put on fake American accents. There’s suspense in the last third, but that and James Newton Howard’s score are the only things I enjoyed.
Rating 6/10


How was your month? Have you watched any of the above films? Agree or disagree? As always, comments are welcome