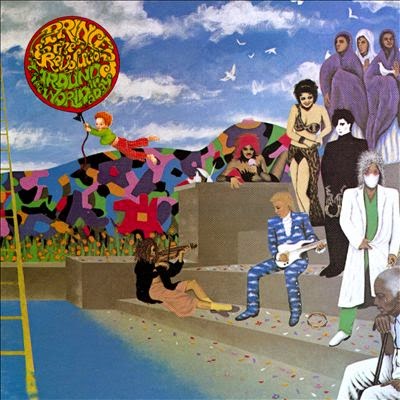 11 Anna Stesia (From 1988’s Lovesexy)
(Love this, both musically and lyrically masterful. Would be in the top 10 if the ending had been as strong as the first 80% of the track. Interesting title, which could be interpreted as the drug anaesthesia. Perhaps that love is like a drug addiction)


12  When You Were Mine (From 1980’s Dirty Mind)
(A classic and it wasn’t even a single. He kind of sounds like Lenny Kravitz on this one)


13 Computer Blue (also listen here) (From 1984’s Purple Rain soundtrack)
(I love the shift in tempo half way through the track. The song was composed by Prince, with credit to his father, John L. Nelson for the guitar solo. As with most of the disc, I feel it works best as part of the full album, rather than a stand-alone track)


14  Paisley Park (or listen here) (From 1985’s Around the World in a Day)
(Very catchy. The song has a psychedelic feel, similar to some of The Beatles' later work with echoed guitar and finger cymbals. The lyrics describe a Utopian place that you can feel in your heart, despite the chaos of the world around you)


15 I Would Die 4 U (From 1984’s Purple Rain soundtrack)
(Very 80s, and a great chorus. Too repetitive to be in my top 10, but I still love it, and works well on the album. The lyrics are quite fascinating, he sings of everything he is not: "'I'm not a woman, I'm not a man, I am something that you'll never understand")


16 Sometimes It Snows in April (From 1986’s Parade - Music From The Motion Picture Under The Cherry Moon)
(A haunting ballad. Thanks to Steven at Surrender To The Void for the recommendation)


17 Controversy (or listen here) (From 1981’s Controversy)
(First time I heard this I thought he was singing “got-your-p*ssy” which in fact was “con-tro-ver-sy” He was quite daring in his lyrics during that time, so wouldn’t have put it past him!)


18 Trust (From 1989’s Batman soundtrack)
(A guilty pleasure of mine, which plays during the Jokers street parade in Tim Burton’s Batman movie)


19 The Ballad of Dorothy Parker (From 1987’s Sign O’ The Times)
(Took me a few listens to get into the song, there’s a lot going on musically, without even listening to the lyrics. I prefer it to the title track Sign O’ The Times which is mainly interesting for the lyrics ”A skinny man died of a big disease with a little name”, which was a reference to aids)

I just discovered that on November 1, Chris Rock is to Host Saturday Night Live with Prince as musical guest.

Be sure to stop by next time for tracks 1-10 as I continue the countdown to #1! Which are your favorites from these Prince albums? As always, comments are welcome.
Posted by Chris at Thursday, October 23, 2014