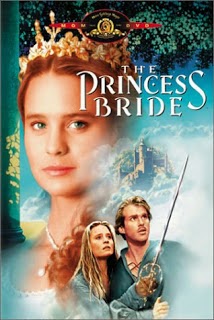 The Princess Bride (1987)
Quotable fantasy/adventure/romance. The movie impressed me the most in the opening 30 minutes or so, with classics scenes like the grandfather introducing the story to his sick grandchild, the farm boy “as you wish” segment, the climb up the cliff, the talkative sword fight, and the wine drinking scene. After they roll down the hill, I felt the storytelling was weaker, and became a bit predictable. If the rest of the movie was as strong as the first half hour, it would be in my top 100.
So many quotes to choose from, here are a few favorites:
Inigo Montoya: “I do not mean to pry, but you don't by any chance happen to have six fingers on your right hand?
Man in Black: Do you always begin conversations this way?”
Fezzik: “Why do you wear a mask? Were you burned by acid, or something like that?
Man in Black: Oh no, it's just that they're terribly comfortable. I think everyone will be wearing them in the future.” 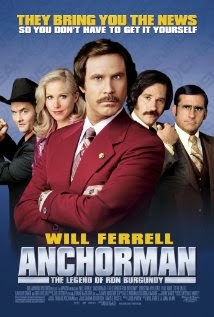 Anchorman: The Legend of Ron Burgundy (2004)
Comedy. An exaggerated portrayal of a local TV newsroom, with Will Ferrell in the lead role. The story is fairy implausible, why would Christina Applegate character be interested in Burgandy after the way he talked to her at the party? Why would all those news anchors suddenly appear in the street? I can forgive these contrivances, because as a comedy it is quite original, and very quotable, and Ferrell and co are sporadically funny. Jack Black and Ben Stiller have cameos. Is the sequel worth watching?
Favorite quotes:
“How now brown cow”
“60% of the time it works all the time” “That doesn’t make sense...”
"My name is Ron Burgandy?"
Rating 8/10 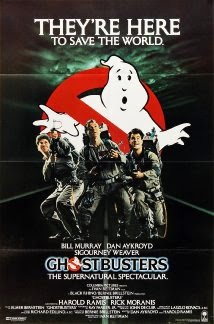 Ghostbusters (1984)
Rewatch. An entertaining action/comedy, the actors have excellent chemistry, the special effects are still effective, and a wonderful soundtrack, especially the iconic Ghostbusters song by Ray Parker Jr,  and Savin The Day
Favorite quotes:
"Nice doggy!"
"He slimed me" "That's great! actual physical contact. Can you move?"
"Tell you what, I'll take Miss Barrett back to her apartment and check her out...I'll go check out miss Barrett's apartment"
Rating 8/10 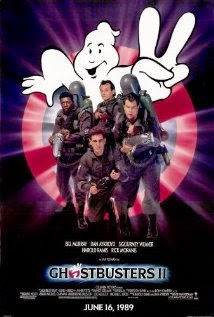 Ghostbusters 2 (1989)
Rewatch. The villain is creeper than the original, the film is quite quotable, but the story is, give or take a few new characters, essentially recycling the first movie's material. The statue of liberty coming to life is my favorite scene, but there are moments which make no sense, like when they jump into the river of evil and just expect to survive. Another thing that bothered me is the continued skepticism towards ghosts and the Ghostbusters, when 5 years ago the city was attacked for all to see. Also, if the villain is a god, why doesn’t he just kill the Ghostbusters when he has the chance? Murray insults the God and just expects there won't be consequences?
Favorite quote: “You know, I’m a voter, aren’t you supposed to lie to me and kiss my butt”
Rating 6/10 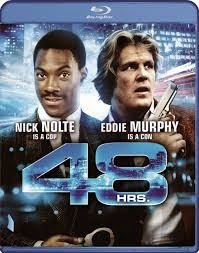 48 Hrs. (1982)
A clichéd cop story slightly elevated by chemistry between Nick Nolte and Eddie Murphy-in his feature film debut. For me, not as good as Beverly Hills Cop (1984).
Rating 7/10 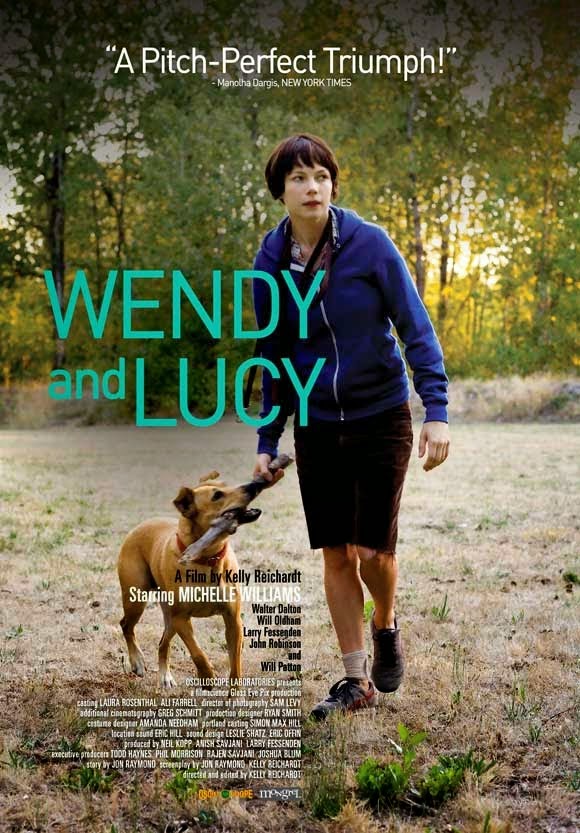 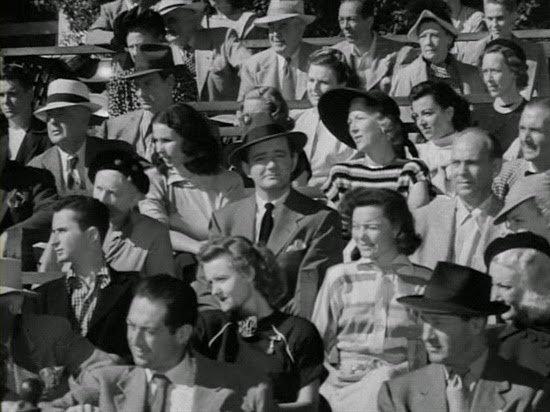 Strangers on a Train (1951)
Hitchcock thriller.
#195 in IMDb’s top 250.
Based on a novel by Patricia Highsmith (author of The Talented Mr. Ripley). About a tennis pro who meets a man on a train, who proposes to swap murders.
Edge of your seat stuff, 3-4 scenes that stuck with me, when Bruno Antony sits in the crowd and stares at Guy Haines, while the rest of the audience watches the tennis match (image above). When Bruno follows the girl in the amusement park, the party game with the older woman, and of course the action-packed merry-go-round scene.
One of the best thrillers, packed full of memorable moments. It’s not for nothing Hitchcock is called the master of suspense.
Rating 9/10 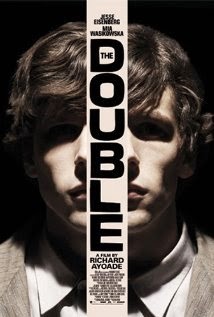 The Double (2013)
An odd setting, which emphasizes both the times of Dostoevsky's writing, yet also puts us in the present. I couldn’t understand when or where the film took place.
The movie logically doesn’t make sense, because nobody notices they are doubles. Which leads me to think maybe they are the same person. But how can others notice they look like each another, if they didn't notice him in the first place? This is why you need to rewatch the movie.
I did however dislike the ending, I expected more considering the fine buildup.
Favorite quote: ”I’ve tried talking to her, but I don’t know how to be myself. It’s like I’m permently outside myself. Like you could push your hands straight through me, if you wanted to, and I couldn’t see the type of man I want to be versus the type of man I am. And I know I’m doing it, but I’m incapable of doing what needs to be done. I’m like Pinocchio, I’m a wooden boy. Not a real boy, and it kills me”
Rating 8/10 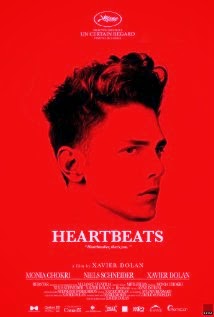 Heartbeats (2010)
I liked the soundtrack more than the movie. Not Xavier Dolan’s best film, at this point he was still honing his craft. There isn’t really a structure, the story is quite messy. Has cool stylistic flourishes mixing music and visuals.
Especially memorable: The slow motion sequence walking down the street with Dalida's song Bang Bang, the bright colors in the bedroom, and the disco scene using Pass This On by The Knife intercut with disco lights, drawings and sculptures.
Favorite quote: when they stand outside the theatre and discuss the play “Pains Migraines and Sonatas”: “These pseudo borderlines with their pain fetish as an escape from existential ennui. Fuck off” (…) “The characters were so Manichean”
Rating 6/10 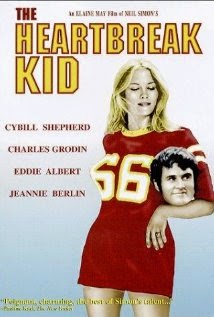 The Heartbreak Kid (1972)
Included in 1001 Movies You Must See Before You Die. A young Cybil Shepard is gorgeous as the femme fatale. Besides that there’s a story about figuring out your place in life, Charles Grodin, in an excellent performance, is on his honeymoon, and must face the facts about life, that sex and romance maybe aren’t quite as magical as you dreamed about.
The humming night club performer was laugh-out-loud hilarious, and so are his lies about hanging out with an old army buddy, and the dinner scene about the an honest meal.
I was waiting for the punchline from the director at the end, which never happened. Perhaps it’s about how some people fall in love without really getting to know the other person properly.
Favorite quote: “There’s no lying in that beef, there’s no insincerity in those potatoes, there’s no deceit in the cauliflower. This is a totally honest meal” 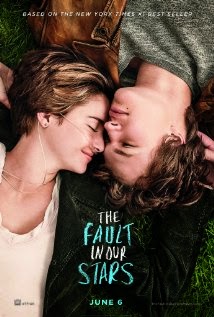 The Fault In Our Stars (2014)
The performances by the young actors are good, and it does have cute moments. I had a few problems though. I disliked that the book references are fictional. I agree with another reviewer that it preaches realism but then delivers the exact opposite. Also bothered me how black and white the characters are, either good or bad. Entertaining enough, despite these flaws. I wasn't the intended audience, so take that into consideration.
Rating 6.5/10 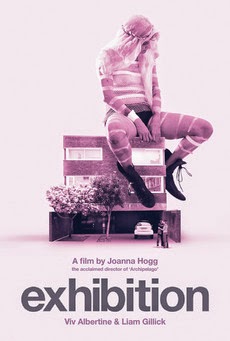 Exhibition (2013)
I'm a fan of Joanna Hogg's earlier films, Unrelated (2007) and Archipelago (2010), which take place during holidays.
Her latest is a lot more abstract, set in a domestic situation, and about life as an artist, when you are married. Unfortunately I never believed that these two people were in a relationship, the dialogue didn't ring true to me. The couple are planning to sell their house. The story feels like a few visual ideas that were slapped together(wearing artsy neon clothes, sleeping in odd places, watching yourself from the outside), but there really wasn't enough here to engage me. A tedious watch, and difficult to care what happens to the characters. I'm sure there is a point to it all, if you are willing to make the effort. Won't be for everyone, because of the slow pacing. Told in an unconventional way, the film put me to sleep more than once.
I'm surprised I didn't like the film, considering my appreciation for the director's previous work.
Rating 5/10


Thanks for reading! Have you watched any of the above films? Agree or disagree? Share your views in the comments.