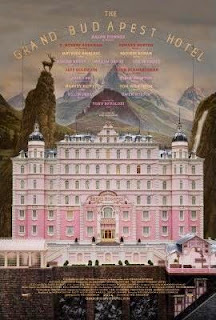 The most visually dazzling movie I’ve seen in quite some time! Happy I saw it on the big screen. Doesn’t have a dull moment, I was captivated by that world that was created, wanting to step into it, and was tapping my foot along to the score. Apparently different aspect ratios were used in each respective flashback, and each era has a distinct color palette, but I didn't even notice that.
Loosely based on Beware of Pity by Stefan Zweig, and perhaps a tribute to a bygone era. The actual story is simple, with entertaining and amusing dialogue. Ralph Fiennes' character is fairly odd, yet I couldn’t wait to hear what he’d say next. 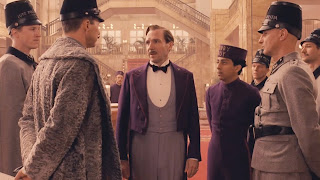 I used to not get the director’s light-hearted style, which I found pointless and lacking in depth, but I‘ve begun to warm to Wes Anderson’s work, as I mellow with age, and just accept it for the quirkiness, charm, playfulness and eye candy. Yes, it may be style over substance, but sometimes that’s ok. You could probably watch The Grand Budapest Hotel like you read a comic, in fact I wouldn’t be surprised to see Anderson’s movies adapted to graphic novels.

I wouldn’t have minded it went on 20 minutes longer, so several of the supporting characters were fleshed out a bit more, and not merely cameos. There are other weaknesses too, the film’s resolution of the murder plot, and the fact F. Murray Abraham doesn't look anything like another character.

I have read critics complain that the characters are unpleasant and lacking in redeeming virtues, but I didn't see it that way myself. While there is pending gloom, violence and greed, the film also highlights what used to be, and still is, important: Decency, meticulousness, manners, eloquence, presentability, being the best at what you do, looking after your fellow employees, and so on.
As Andy Buckle wrote in his review, Anderson is able to "find humour in the most sad and mundane events"

Agree or disagree? As always, comments are welcome
Posted by Chris at Tuesday, April 08, 2014