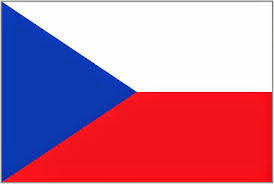 When you talk about the history of cinema, the Czechoslovakian films of the 1960s are for many cinephiles an underseen part of exploring the cannon. Winning Academy Awards for Foreign Language Film for Closely Watched Trains and The Shop on Main Street, and nominations for Loves of A Blonde and The Fireman’s Ball, the 1960s was an innovative and creative period for the region, due to the lack of restrictions, and talented new filmmakers making their mark.
Trademarks of the movement are long unscripted dialogues, dark and absurd humour, and the casting of non-professional actors. The films touched on themes which for earlier filmmakers in the communist countries had rarely managed to avoid the objections of the censor. Their objective in making films was "to make the Czech people collectively aware that they were participants in a system of oppression and incompetence which had brutalized them all."
I won’t go into detail about the Czech New Wave, as others have already done so. Bonjour Tristesse, The Droid You're Looking For, and Greencine already wrote fine introductions about the filmmaking of that era.
I have only seen 9 Czechoslovakian films, most of which are considered important works from the period. So what I’ll do is share my reviews: 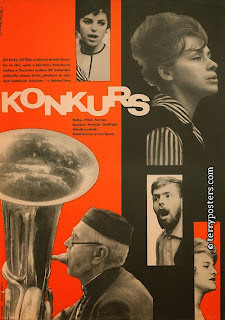 Audition/Talent Competition (aka Konkurs) (1964)
Early film by Milos Forman. It was influential in Czechoslovakia for the style, incorporating a mix of documentary and fictional elements, inspiring filmmakers to experiment with amateur actors in a documentary setting.
Gives a depiction of youth culture of the era. Split into two segments, the stories deal with youths wanting to make it as singers and musicians, kind of like the talent contests today. The film consists of music and singing, and for me is a tedious watch, with a few traces of a story in the last 30 minutes. A situation, not a fully formed screenplay, so I can’t recommend it. The innovative style is praiseworthy, but the actual story is below average.
Rating 6/10 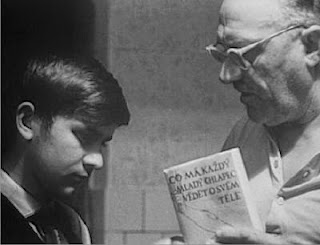 Black Peter (1964)
Directed by Milos Forman. A black-and-white coming-of-age drama with likeable characters. The boy gets a job in a shop, and awkwardly tries to court a girl. There are scenes at a lake, at a dance, and him looking out for shoplifters at the grocery store.
As with Audition (1964), Foreman uses non-professional actors, and Black Peter sees him experiment a lot with close-ups. There’s a sense these moments could be real life scenarios. The awkwardness of getting along with your parents, and approaching the opposite sex are situations viewers can mirror from their own life.
Rating 8/10

Loves of A Blonde (1965)
Directed by Milos Forman. Nominated for Best Foreign Language Film. Continues the black-and-white coming-of-age approach of Black Peter (1964).
The strongest parts of the story are the beginning and ending. At first, we see soldiers trying to court girls. Towards the end of the film, a girl visits her new boyfriend, only for confusion to ensue.
The parents of the boy don’t know what their son is doing, and they just sit and watch TV. Famous for the iconic image above of the two lovers.
The funniest scene to me is when the lovers attempt to close the window blind.
Rating 8/10 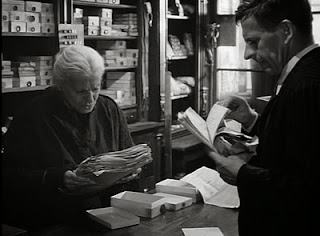 The Shop on Main Street (1965)
Directed by Ján Kadár and Elmar Klos
Won Oscar for Best Foreign Language Film. With a bit of editing, this film could have better. Well-acted, but the movie drags, and didn’t need to have a running time of over two hours. Could easily have been told in 80 minutes. The realistic story is quite good, and something that could be watched by anyone, so I can understand the oscar love, as the Academy have a thing for the plight of the Jews during WW2. From what I could gather the charming old Jew lady really was oblivious to the situation, and I found that hard to believe, that she could be completely blind to what was going on in the town. Maybe she was senile. The ending in the shop is powerful, but again overlong. Not among my favorites, but it is an essential watch, if you are exploring the best of the Czech and Slovak films. The themes are still fresh, and could have been made into a film in 2014.
Rating 7/10 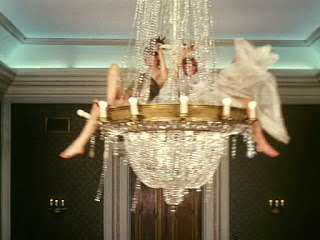 Daisies (1966)
Sometimes referred to as the best film of the Czech New Wave. Words to describe it would be atmospheric and colorful. Very distinct and inventive editing. The story is a simple one of two mischievous, free-spirited, directionless, rebelling teenagers having a good time, messing about, and looking for experience and attention. The girls make use of men before men can make use of them. The dinner table scene at the end was definitely the highlight for me, and put a smile on my face, despite the aberrant behavior. The stylish visuals by the filmmaker seem to be as playful as the girls’ attitude. A film about rule breaking and freedom of speech. Both by the filmmakers and by the characters.
As another reviewer writes: “Its rebellious protagonists and freewheeling spirit were essentially an allegorical but brazen denunciation by the director of the then regressive regimen behind the Iron Curtain”. It was released in its home country in 1966 but subsequently banned.
The director herself described it as being about ‘destruction, or the desire to destroy’. Her cinematographer, Jaroslav Kucera, wanted the film image to escape from a strictly objective vocation. Kucera believed that the film should acquire the same power of 'subjective meaning' as other modern arts such as poetry, music and painting. The audience's role in creating the film's meaning is crucial. The symbols throughout the film are open to multiple interpretations.
Rating 8.5/10 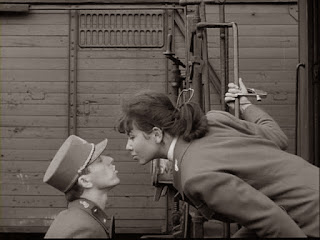 Closely Watched Trains (1966)
Won Academy Award for Best Foreign Language Film. Set during WW2 and the Nazi occupation of Czechoslovakia, a coming of age story about a few people, who work at a train station. We follow their daily life.
I didn’t think it as remarkable as others seem to, but it does have a certain charm. The juxtaposition of darkness and comedy one after the other was unusual, and those two scenes are what I remember most vividly, when he has a bath, and when the other station worker fools around with the stamp equipment with the young woman. The opening of the movie was also well-done, in introducing the young man’s family members in a humorous way.
As Lisa Thatcher wrote in her review: “In this film Czech sexual liberation is posited against Nazi oppression”
Favorite quote: “If she bent over me, the whole world would become dim”
Rating 7.5/10 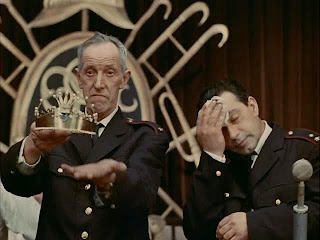 The Fireman’s Ball (1967)
A comedy that has a lot of energy, despite made in the 1960s. Nominated for Best Foreign Language Film, yet banned in its native Czechoslovakia when the Soviet troops occupied the country in 1968. Different to Milos Forman’s previous films, which had moments of subtle humor but were essentially dramas, Fireman’s Ball is comedy in a more obvious over-the-top way. Was his first film in color. I’m pleased I don’t have an unspellable Czech name like those girls did :)
According to Mark Cousins in The Story of Film, Forman “saw life as comic, almost absurd”
Firemen were supposed to be portrayed as heroic public servants in the communist world. In Forman’s film Fireman’s Ball, authority are incompetent and immature.
I did find it funny. But also a little creepy that these old guys are drooling over the younger females, something which runs through many of the films of the period.
The house next to the party is a little too convenient for the story, even so, you forgive that, because it’s so fun and entertaining.
According to the dvd extras, the screenwriters experienced a real fireman’s ball that turned into a nightmare, and this inspired the script. The screenplay was not approved by Czech censors, and risking a 10 year imprisonment for “economic damage to the state”, Forman managed to smuggle a copy of the film to France.
40.000 firemen quit their job as a protest against Forman, only to return to work after the director had assured them that the movie was not criticizing firemen specifically.
Rating 8.5/10 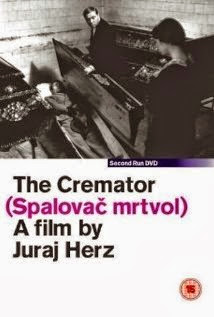 The Cremator (1969)
A horror /drama directed by Juraj Herz.
I loved the pre-credits scene at the zoo, the extreme close-ups and eerie soundtrack immediately made me feel uneasy. The opening credits are also really interesting, and cast a spell on you, so that you want to get to the bottom of all this. The first 5 minutes I would give 10/10. The rest of the film is pretty good too. Several stand-out scenes, when he’s showing the new guy the ropes at the crematory was creepy, as was the “puppet” show, and of course the ending, which I won't reveal.
Superb performance by Rudolf Hrusinsky, as the cremator, his voice is remarkably chilling. Even his wife is scared of him, so I kind of felt sorry for the poor guy, because it seems he was creepy all the time. Then there was a twist I wasn't expecting, which changed my perception of the characters.
As Bonjour Tristesse wrote in his review: “someone you are compelled to watch, but would never want to be alone in a room with.”
Favorite quote: “I am sure you love music, Mr. Strauss. Sensitive people do. The poor pitiful souls, who die without knowing Schubert, Liszt.”
Rating 8/10 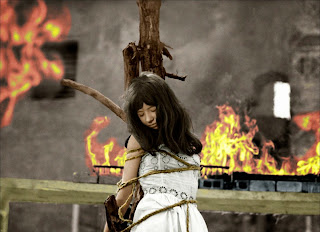 Valerie and Her Week of Wonders (1970)
Impressive visual style, but little story to speak of. It can’t figure out if it wants to be a horror film or a children’s film. Perhaps that's what makes it unique, that's it's both.
Marked a shift away from the acerbic social dramedies that had characterized the director’s work, towards a more apolitical, lyrical approach in his later films.
The film probably inspired Neil Jordan’s The Company of Wolves (1984), which has the same strengths and weaknesses.
Rating 7/10

Have you watched any of these Czech/Slovak films? Are you interested in exploring the cinema of that era? Which films should I watch next? As always, comments are welcome