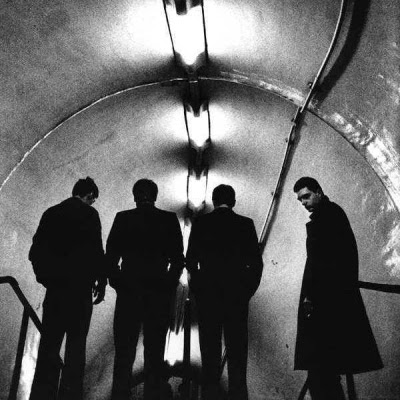 Joy Division were an English post-punk rock band formed in 1976 in Salford, Greater Manchester. I have to confess I mainly like the singles these guys put out. What make Joy Division songs hold up today are the emotions, which will still be relevant in 100 years. The band consisted of lead singer Ian Curtis (vocals and occasional guitar), Bernard Sumner (guitar and keyboards), Peter Hook (bass guitar and backing vocals), and Stephen Morris (drums and percussion). Hook, Morris and Sumner all played as if they were the lead instrument. The bands anger was not that of banal punks lobbing scowls at the everyday targets of frustration, but more mysterious, less domestic, rage aimed at time, history and the gods, aimed at the self, and fate. A unique, haunting vocal, that was somehow mature beyond Ian Curtis' years. Credit is also due to Martin Hannett's production work on the record, bringing it all together. According to article in Rolling Stone, Joy Division created arguably "the most influential sound of their scene and era."

The group was originally called Warsaw, named after a David Bowie track from Low (1977) called Warszawa. Their first gig was in May 1977, supporting the Manchester Buzzcocks. They changed their name because of a London punk group called Warsaw Pakt, and instead became Joy Division, a name they found in an obscure book about the German concentration camps, The House of Dolls, written by an inmate, Ka-Tzetnik. The ‘joy division’ was a term used to describe units where female inmates were forced to prostitute themselves for Nazi guards. Singer Ian Curtis was interested in history, though there is no evidence to suggest he was sympathetic to Nazi’s, and this is regarded as a misreading of the band to see them in that light. The band name seemed to flow into and out of history, and pointed at an inquisitive group of individuals, always hovering out of reach.

The poetic lyrics may have been inspired by William Burroughs (authour of Naked Lunch), who's world view is similar to Ian Curtis' words. That of post-industrial nightmare, bigotry, lack of ethics, cynical, hate-filled, totalitarian underside, greed of western society gone mad, the nature of perception. 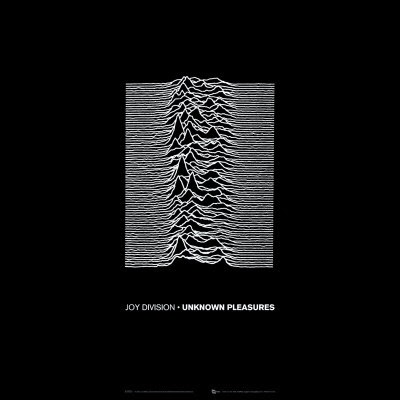 The album cover sleeve depicts the radiograph of a dying star, and has become an iconic sleeve. According to the Joy Division documentary (2007), the designer had not heard the music when he made the cover.

She’s Lost Control, perhaps the closest Ian Curtis got to portraying the effects of his debilitating epileptic condition, he was famous for his unique “epileptic” dancing. Curtis was quoted in a radio interview: “Instead of just singing about something, you can show it as well”
People thought it was Ian Curtis hinting as his own epilepsy, but he always claimed, because he used to work in an epileptic unit, that the song was about a girl with epilepsy. When he finally got epilepsy himself, it’s what created the fear and panic for him, because he had seen really extreme bad cases of epilepsy, and he thought that was his fate.
Strobe lights could trigger a fit. He would always have the sense of being on the edge of control.
The music seemed to lift Curtis up and fling him about, as if he was possessed by its power. (see live performance in above video)

(He sings "I'm not afraid anymore", but you don't believe him. Allmusic describes the song as a: "nervous drive toward some sort of apocalypse")

I Remember Nothing - Joy Division 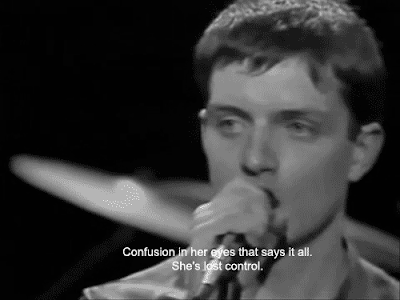 Peter Hook: “When Ian was with us, he would go along with that, become a bit of a lad himself – perhaps out of politeness – I don’t know. But he didn’t like to be like that in front of (his girlfriend) Annik. He was the sensitive artist in front of Annik, and we were the buffoons. Maybe he just went back to how he was with (wife) Debbie, quiet and unassuming. With us, he joined in the larking about. I don’t know. Maybe that’s what he was really like – and he just pretended with us that he was the bloke into wild bloke things. Or maybe he was pretending to Annik, to Debbie. That was the thing with Ian, he could be all things to all people. Keeping it all up, wearing the right mask in front of the right person, he could do it, but it was a problem for him. It added to the pressure. And then Annik started to say to Ian that she didn’t like the keyboards, that it sounded like Genesis, and that made him panic”

“The sad thing is, when he was well, he was the type of bloke that really didn’t want to cause any trouble. And when he was ill, he wanted to hide it from you. He didn’t want anyone to know how much trouble he was in, physically and mentally. He didn’t want things to go wrong because of him, You’d ask him, are you okay? Definitely, he’d say. In hindsight, it’s obvious he was a people pleaser. He was more and more in a mess, emotionally, domestically, physically, but he seemed okay more or less to the end, in terms of how he acted in front of everyone. But really there was no one to give him the kind of care he needed” 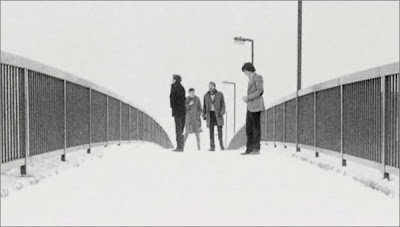 “To be truthful, I would just think Ian’s lyrics were fantastic, not that they were really about anything to do with him, or his life. In the end I was so wrapped up in myself that I didn’t notice he was desperately trying to say something to us that he didn’t really say in everyday life. I just thought, well, that’s his job, and he’s delivering, and they’re great, and they’re about something, but not something real, and on we go”

“We had great strength as a group, but as individuals we were all in our ways prone to stress. Being in such a situation sort of exaggerated what you were deep down, and I escaped the chaos in my way, which was to be loud and laddy”

“It’s amazing. It amazes me – the aura that surrounds the group. I just do not know where it came from, thinking of how we were so young and naïve at the time, even though we didn’t want anyone to know. Maybe we were putting on this front, and that was something that made it into the music – we were trying so hard not to be found out, that we couldn’t really play, or write, or make records, or look good, and somehow we convinced everyone, even if not ourselves.”

“I sometimes think if Ian had lived, the band would not have lasted as long as it ultimately did, as New Order. There’s no way he could keep up with the pace. That was the bloody problem – we were going too fast for him, and he couldn’t keep up.” 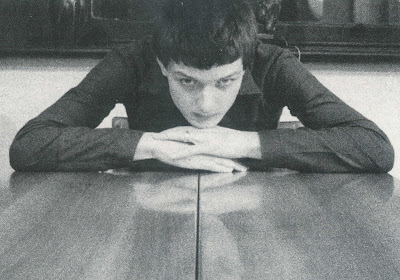 “I don’t think if Ian had survived, the group could have lasted much longer, not considering the state he was in. It would all have ended a long time ago. In a way his death extended the life of the group. His head couldn’t take it. (…) but Ian would have been the first to have stopped playing so many gigs if he could have done without feeling he was letting us down. In a way he wanted a quieter life. He talked about owning a bookshop. If he had lived, in some ways I imagine him writing novels, not living the rock star life”

“If we really thought about it, at the beginning of the year, because Ian was so ill, the band’s future looked really bleak but we didn’t want to acknowledge it because we were at a creative height and everything was starting to happen for us”

Musician Genesis P. Orridge talks about Ian Curtis in the 2007 documentary, "Every week he was becoming more and more shut off from what people perceived him to be. Ian Curtis was two people, the media figure singer, and the actual Ian Curtis, who was hurt, angry, lost, very lonely. And didn't think people would treat him with respect if he (Ian Curtis) explained who he really was."


Readers, was my review useful? Any thoughts on the music? Next week, a look at Joy Division's album, Closer (1980), and the classic non-album singles Love Will Tear Us Apart, and Atmosphere.