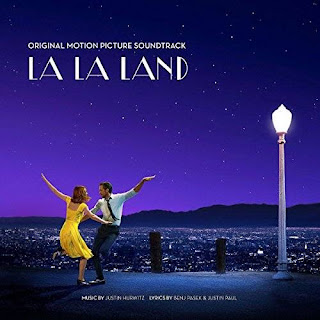 81.)
Jesus Alone by Nick Cave & The Bad Seeds
Atmospheric and epic. Arguably the most beautiful lyric of the year: "You're a distant memory in the mind of your creator, don't you see?"


82.)
Nothing's Real by Shura
Retro 80s synthpop. The title track from her debut. An upbeat tune which is actually about having a panic attack. Thanks to Josh at Cinematic Spectacle for suggesting the album.


83.)
1944 by Jamala
Don't usually care for the Eurovision Song Contest. The Ukranian winner surprised me. Powerful and gives a voice to the distress in Ukraine.


85.)
City of Stars / La La Land (Original Motion Picture Soundtrack)
A weak year for soundtracks, but surely City of Stars will be remembered for years to come.
The director of the film was quoted as saying in an NPR interview: "That, I think, was a really powerful, beautiful idea to me, that if you feel enough you break into song"


86.)
Memory by Violent Femmes
Reviewers were not kind to this album which is the bands first in 16 years. Memory is an endearing little tune which fits nicely in their canon.


87.)
Intermission by Emma Pollock
She is a Scottish singer-songwriter and the track I shared is sad yet haunting.
Emma said: “A lot of the album is inspired by the death of my mum last February and the illness which preceded it. My mum had heart disease and needed support over the years.
I’m an only child and much of my headspace was consumed by that. The thing that occupied me was that sudden flip of dependency from the parent to the child. It’s terrifying, devastating, when it occurs, but it’s inevitable for many parents and children and many of us will go through it.
Knowing it’s inevitable doesn’t make it any less shocking when it happens. It’s the clash between proper ordinary demanding life, and still wanting to be a dreamer." The experience gave rise to the song Intermission, included on her 2016 LP In Search of Harperfield.


88.)
Tired as F**k by The Tragically Hip
Another find from Canada on Said the Grammophone's top 100. For someone who spends a lot of time recovering and being tired, this was a song I connected with. And not just the lyrics, these guys can play too.


89.)
The Last One To Be Loved by Rumer (Burt Bacharach cover)
Rol at My Top Tens included the LP among his favoites of 2016 and encouraged his readers to check it out. Rumer's interpretation goes in a Karen Carpenter direction and is more affecting than the Dionne Warwick performance and Burt Bacharach instrumental version.  Rumer's is up there alongside Lou Johnson's as the best rendition. I enjoyed the instrumentation on the new version, reminded me of George Harrison solo.


90.)
Under Your Always Light by Leanne Betasamosake Simpson
Discovered the artist on Said the Grammophone. About Canada's missing and murdered indigenous females. Like a hypnotic Malick voice-over, accompanied by modern music.


Find anything you liked? Already know some of these? As always, comments are welcome. Tracks 80-71 coming soon!
Posted by Chris at Friday, January 27, 2017