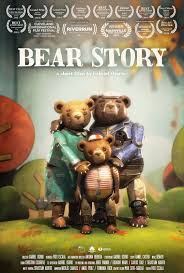 Won Oscar for Best Animated Short. The first ever Chilean winner of an Academy Award. A moving 10 min story-within-a-story short about a lonely bear who spends all night perfecting his mechanical diorama. The device tells a story about the bear's past. The next day, he wanders the streets with his mobile theatre. A blue bear pays to see the show. The audience witness what he sees. A tale of a bear taken from his family and put in a travelling circus act to perform tricks.

You can read whatever you want into the story. For some viewers it will be about how creating art can be a tool to process trauma and loss. Telling stories can be healing and a way to pass on wisdom to the next generation. An attempt to remember (and perhaps recover) the life he used to live with his wife and son.

You could interpret the bear as a victim. Circus- and zoo animals are put in cages against their will and are no longer in their natural environment.

I've read it's autobiographical. An allegory for the way families were torn apart during the murderous Pinochet regime in Chile in the 1970s. After about half a year under Pinochet, Chile had become a place where people who talked too much or asked too many questions simply disappeared.

“The idea was mainly inspired by the story of my grandfather,” said Osorio(the director of the short). “He was exiled from Chile in the ’70s and spent 10 years in England — I knew that I had a grandfather, but I didn’t meet him when I was a kid.” Osorio made the main character a bear in part because he remembered his grandfather being physically imposing.

I haven't even talked about the animation, which is unique.The teddy bears are so cute you want to hug them. In certain moments you forget it's animated, because the items in the diorama look like wind-up mechanical toys and actual set pieces. The animation style is influenced by steampunk.

Perhaps you could argue it was not realistically happening inside the box, but this could account for the perspective. The young blue bear may be partly imagining in his head what is going on. So it shouldn't be taken on face value.

The score fits beautifully within the context and has a music box feel. A piano/xylophone melody that is both melancholy and affecting. In fact there is no dialogue, because the emotions are conveyed through images and sound.

A short you may want to watch a couple of times to fully grasp. I went in blind and didn't understand the layers on first viewing. The ending is ambiguous.

You can currently watch the short here