I finished 9 books in 2015. Here are my brief thoughts on those. 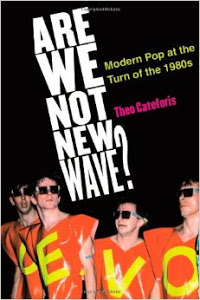 Are We Not New Wave?: Modern Pop at the Turn of the 1980s by Theodore Cateforis (2011)
Interesting chronology from late 1970s until early 90s. The author mentions a wealth of bands from the 80s, which to me was the main attraction about reading the book.
I enjoyed bits and bobs about how New Wave can be seen in an oppositional stance to the traditional dominant rock. New Wave with its synthesizers, rudimentary musicianship, and androgynous fashion. Popular heavy metal bands in the mid 80s such as Mötley Crüe perceived themselves as making real music compared to the synthpop bands. When rocks acts like Van Halen, Rush and Bruce Springsteen began using the synthesizers the distinction between rock and pop became blurred.
I'm not sure you can really make these clear distinctions, as every band is different, but it's a way of examining the music of that time.
Later chapters I skimmed over, which explore in detail the impact of groups such as Devo, the B-52s, The Knack, and Gary Numan, In the chapter about Talking Heads, Cateforis is quite critical of the way David Byrne promoted Remain in Light (1980). Adam & The Ants are criticized for borrowing African music for their album and keeping all the profit for themselves.
Overall, the book is a tad repetitive, but momentarily interesting.
Rating 3.5 out of 5 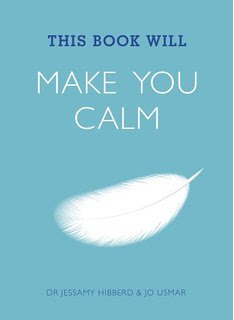 This Book Will Make You Calm by Jessamy Hibberd and Jo Usmar (2014)
Co-written by a clinical psychologist and journalist, this self-help book has a number of platitudes, such as tidying up, eating a healthy diet, exercise, getting enough sleep, and so on, but also interesting parts as well about dealing with stress and anxiety. You don’t have to read the book from cover to cover. I liked the part about negative automatic thinking. Making assumptions too quickly.
How your stress is very dependent on your interpretation of an event. I think the authors are right that questioning your immediate reaction is a good idea. You have to give other people the benefit of the doubt. You may put too much emphasis on one particular character flaw and overlook other aspects about that person. Hibberd and Usmar urge us to distract our worried thoughts by playing a game, doing a crossword, listening to music, exercise, reading positive quotes, and so on.
Rating 3 out of 5 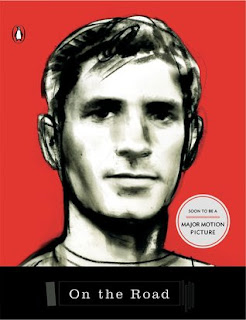 On The Road by Jack Kerouac (1957) (full review)
A semi-autobiographical classic. The book seems to endorse the reckless and impulsive “on the road” lifestyle as a method to gain experience and live life to the fullest, yet also acknowledges living that way can be hurtful to those you are irresponsible towards.
Sal and Dean are always running away from problems, or seeking something new. Not dwelling very long, with a short attention span. You could argue what they are doing lacks purpose.  Dean (real name Neal Cassady) was beloved for his ability to inspire others to love life. Sal knows Dean and Marylou are getting him into all sorts of trouble, but Sal misses the excitement when he is alone.  Inspiring the reader to go on road trips is a big reason why the book has endured. The book does drag in places, yet there are a number of great passages I will treasure, such as when Remi Boncoeur helps Sal get a job at a barracks in San Francisco, and a fast-paced trip in a Cadillac limousine.
Rating 4 out of 5 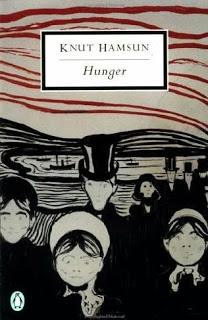 Hunger by Knut Hamson (1890) (full review)
Considered a classic of Scandinavian literature. A stream-of-consciousness account of a starving writer who roams the streets of the Norwegian city of Kristiania (Oslo). Loosely based on the author's own impoverished life before his breakthrough in 1890. Transports you back to the 1800s, so I felt I was actually there. You get under the skin of the main character who has both a tragic and a humorous side to him, not necessarily how he sees himself, but how others perceive him. The story is about stubbornness and pride. Wanting to be independent and not rely on family and handouts, however difficult this may prove to be. This is an admirable quality and I did feel sympathy for his plight. So undernourished that he starts doing illogical things. Since it’s told in the first-person, we don’t know if he is a reliable narrator, is he imagining events, could parts of the book be hallucinations? Is he going insane? To me both film adaptation and novel are unforgettable. I've decided to rate the book without considering the controversy in the later years of Hamsun's life, which I don't think is relevant in judging the worth of a book published 50-60 years before WW2.
Rating 4.5 out of 5 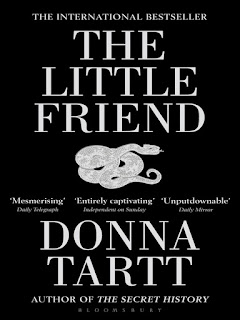 The Little Friend by Donna Tartt (2002) (full review)
Described by The New York Times as a young-adult novel for grown-ups. As with The Secret History (1992) by the same author, momentarily I stumble upon passages I connect with. It is slow and tedious in places, and I felt cheated in regards to the murder mystery, but ultimately a rewarding read which I am happy to have had, especially in how it took me back to childhood. This may not have been exactly what the author intended for me to take away, since I read in an interview she was making commentary on the Deep South. While Tartt's sophomore effort is well-written, and with life-like characters I cared about, the actual narrative for me is not quite strong enough for it to achieve greatness. The author manages to create a believable world I could get lost in, and beautifully renders the inner life of her main character, but at the same time the novel is overlong and self-indulgent. As another reviewer wrote, Donna Tartt “may reveal a determination to succeed on her own terms, however much these prove frustrating to the reader.” Despite these reservations, I look forward to reading more of her work. I'm moving chronologically, so The Goldfinch (2013) is next.
Rating 3.5 out of 5 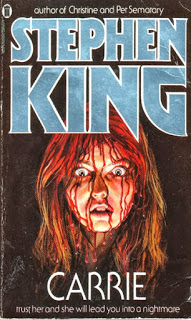 Carrie by Stephen King (1974) (full review)
A coming of age horror classic. Stephen King’s debut as a novelist and became a bestseller. You can interpret the novel autobiographically as Stephen King dealing with traumatic experiences from his youth. Carrie White is a teenage outsider and the story about bullying and teen rebellion feels timeless. The other girls are so cruel and their harsh words are just as bad. Carrie’s determination and stubbornness to stick it out for years is admirable. Others would have changed school. Yet King doesn’t just portray her as a victim.
Her mother Margaret is fanatically religious and domineering, wanting Carrie to pray and stay away from boys. Carrie is fighting for her independence. Anyone who has ever had an over-protective parent or was bullied may feel a kinship with her.
While it is empowering, the story is controversial, and could be taken the wrong way, encouraging violence, and has a negative view of religion. When it came out was one of the most frequently banned books in school libraries. Holds up well, especially the beginning and ending. A modern day fairy tale which deserves its cult classic status. The story reminds us we are all capable of terrible acts.
Rating 4 out of 5 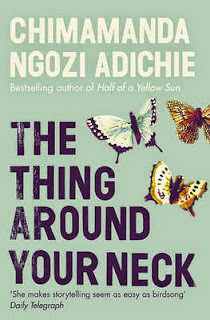 The Thing Around Your Neck by Chimamanda Ngozi Adichie (2009) (full review)
Adichie is an award-winning female Nigerian author and lecturer. She is perhaps most famous for her novel Half of a Yellow Sun (2007). Adichie’s aim is not just empty entertainment, she wants to show us how Africans think and behave, and how westerners act towards Africans.
This collection of short stories deals with women being oppressed by oppressive men, corruption, injustice, prejudice, African views of the American dream, etc. I was introduced to the Nigerian way of life that I wouldn’t otherwise have been subjected to. I’m sure there are nuances I didn’t catch because of the cultural differences.
Her main characters are often Nigerian females, and you could argue Adichie is reluctant to portray her narrators in an unsympathetic way. If you are male and read it from cover to cover you may feel the book is too misandrous. Of course the goal is to give empowerment to women and promote change, which I am in favor of, but for me the weakness of the book is it’s generally too one-sided and lacks subtlety. Adichie is a writer who writes what she knows, and it's clear that her own personal experiences have influenced her stories. You can’t fault her intent, presenting the problems Nigerian women face, and the author has many insights to share.
Rating 4 out of 5 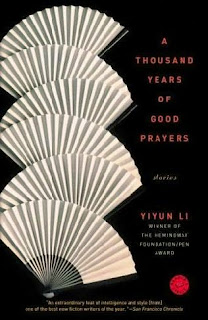 A Thousand Years of Good Prayers by Yiyun Li (2005) (full review)
A multi-award winning debut fiction work. Yiyun Li grew up in Beijing and came to the United States in 1996. Consists of a collection of ten short stories about life in modern China and Chinese Americans in the US.
I like the observations about how the rigid system in China sometimes causes unhappiness among its citizens. However the writer’s anti-communistic critique of the regime is too repetitive, so while interesting, the book is a bit monotonous thematically. I do think the messiness of life is handled well by the author, which is not necessarily specific to China, but universal.
My experience of reading short stories is that it’s quite demanding, because you have to keep starting from scratch after a few pages. Worth a read if China and its people interest you. Certainly a brave publication in a country that is notorious for its censorship. Although China is changing, it's still shaped by its traditions and recent history.
Rating 3 out of 5 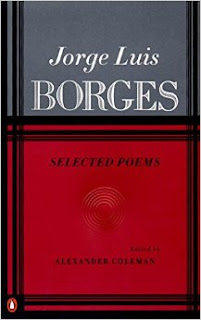 Selected Poems by Jorge Luis Borges
Worth a look. Not as strong as his short stories.
Rating 3 out of 5


So those were the books I read and reviewed last year. Have you read any of them and what did you think? What were your favorite reads of the last 12 months?