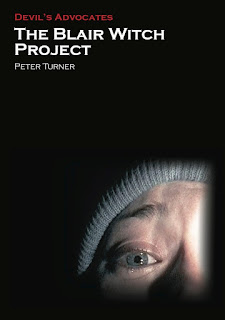 Part of a book series that examines important and influential horror films. A short read at 95 pages. I've commented on Pete's UK based site I Love That Film for a few years now, which is how I heard about the publication of his first book. He is currently working on a found footage horror PhD.

The book is well-researched and he relies on multiple sources at his disposal. Clearly he is passionate about The Blair Witch Project and could talk about it for hours. Perhaps due to budgetary reasons, the publication lacks new interviews with the cast and crew of the film. The middle section of the book became a little too bogged down in academic technicalities, these paragraphs about camera movements and so forth may only appeal to the ardent horror fan.

The opening third of the book is the most entertaining and accessible, with insights about the production of the film. For example that the iconic framing of the top half of Heather's face (see book cover above) was a happy accident as the actress had thought she had shot her entire face. The most surprising revelation to me was how the directors actually directed from afar. They left milk crates with supplies and notes at location spots, which you can read more about in the book. Another interesting revelation is the dialogue is improvised, the actors should be given more credit than you'd think. The last third about the representation of women and the film’s marketing/reception/legacy is satisfying as well. Enough time has passed so comparisons can be made to other found footage films.

An enjoyable read, which has given me a new appreciation for The Blair Witch Project and how it was made. If the goal was to persuade me to rewatch the movie, then the book succeeded. Recommended for those interested in the film.
Posted by Chris at Saturday, January 30, 2016