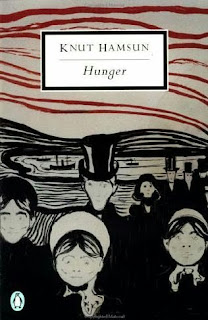 Considered a classic of Scandinavian literature. A semi-autobiographical stream-of-consciousness account of a starving writer who roams the streets of the Norwegian city of Kristiania (Oslo). Loosely based on the author's own impoverished life before his breakthrough in 1890. Transports you back to the 1800s, so I felt I was actually there. You get under the skin of the main character who has both a tragic and a humorous side to him, not necessarily how he sees himself, but how others perceive him.

An example of the tragi-comic humor can be found on page 6 when he stands in line for a job in the fire brigade and is passed on due to wearing glasses. He then tries again without glasses and the fireman recognizes him and smiles.

The story is about stubbornness and pride. Wanting to be independent and not rely on family and handouts, however difficult this may prove to be. This is an admirable quality and I did feel sympathy for his plight.
He tries to maintain an outer shell of respectability, self-destructively giving away what little money he has, but doesn’t know if he will have enough food from one day to the next. Writing articles and selling his belongings in order to eat and pay the rent. Having no support system except his writing, and it begins to take its toll on him physically and mentally.

Thematically it’s about the side effects of isolation and malnutrition, and the various degradations of the main character. The narrator has an overdeveloped sense of personal worth, sometimes feverish from lack of food, other times contemptuous of humanity. So undernourished that he starts doing illogical things. Since it’s told in the first-person, we don’t know if he is a reliable narrator, is he imagining events, could parts of the book be hallucinations? Is he going insane?

American writer Paul Auster argues in his 1970 critical essay: "it would be wrong to dismiss the hero of Hunger as a fool or a madman. In spite of the evidence, he knows what he is doing. He does not want to succeed. He wants to fail. Something new is happening here, some new thought about the nature of art is being proposed in Hunger"

The 1966 film adaptation (which I reviewed here) managed to include most of the key scenes and tap into the bleakness and humor of the novel. The parts that were left out include him sleeping in a jail and being scared in the dark, and also when he lives with a family who reluctantly let him stay despite him running out of money.

To me both film and book are unforgettable. I've decided to rate the book without considering the controversy in the later years of Hamsun's life, which I don't think is relevant in judging the worth of a book published 50-60 years before WW2.

Have you read anything by Knut Hamsun? What did you think of Hunger the book/film?