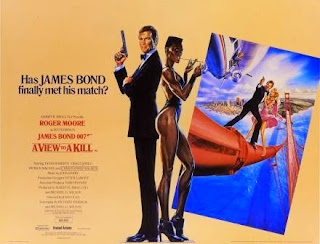 Critics and today's audiences tend to give the 1985 Bond movie A View To A Kill a hard time. The complaints often center on Roger Moore as a 57-year-old 007, who admittedly was getting too old to be plausible in the role of James Bond. Another critique was the lack of gadgets which audiences had come to expect. In many ways the film marked the end of an era. It was Roger Moore's last outing as Bond, and also Lois Maxwell's final turn as M's ever-dependable secretary, Miss Moneypenny. The people who grumble about their age forget that the reason these characters are coming back is because we actually cared about them from the previous movies. Perhaps to avoid creepiness it should have ended with Lois Maxwell and Roger Moore hooking up? They both looked the appropriate age to be a couple.
Roger Ebert is right that Max Zorin's Silicon Valley scheme makes no sense, as the chip manufacturers are in Japan, I'm willing to forgive that aspect, as it wasn't something that I noticed until Ebert brought it up.

Here are 17 reasons why I love A View To A Kill: 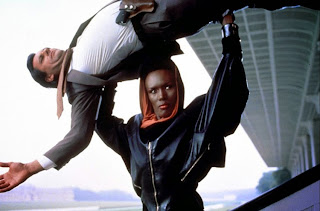 1.)  It's just so entertaining and rewatchable and there's never a dull moment 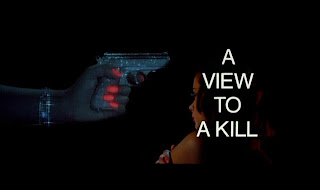 2.) The song A View to a Kill by Duran Duran in the opening credits. It was the last music they wrote before the group broke up, and it remains the only James Bond theme song to have reached number 1 on the US Billboard Hot 100. An 80s classic. 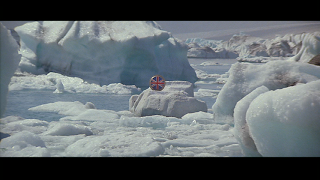 3.) The pre-credits action sequence and the iceberg submarine 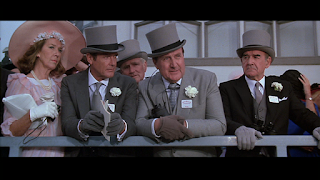 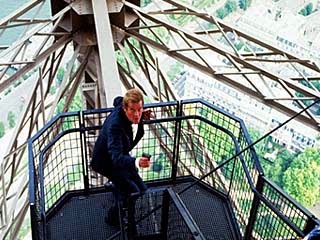 5.) This Bond movie has some of the most amazing locations in the entire series. The Eiffel Tower had never been so exciting before. The chase through the streets of Paris is a highlight too. 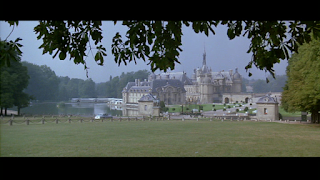 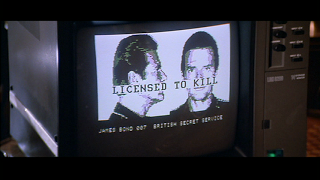 6.) Zorin's beautiful French estate Chateau Chantilly. The secret lab at the stables, the scene when Zorin appears to pick Bond's horse from the computer, and the thrilling horse race that would follow.

7.) Flamboyant model and recording artist Grace Jones as the memorable and feisty henchwoman May Day. I actually believed she could beat up Bond, and Jones steals every scene she's in. The story arc of her character was also something which was interesting. Her character scared and fascinated me as a kid. Her costumes are bizarre and unforgettable. 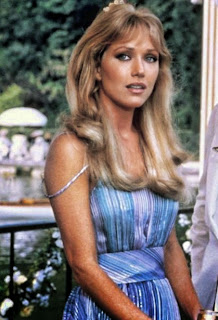 8.) Tanya Roberts. Even if people say she gave a poor acting performance and to many was just a helpless barbie doll, she is for me the most beautiful of the Bond girls, those eyes, wow. To her credit Stacey Sutton is actually not a dumb rich girl, and majored in earth science in college, which becomes evident in the dialogue scene in the mine. It's a shame she suffered the "Bond girl curse" and never made it big in subsequent years. Roberts was nominated for a Golden Raspberry Award as Worst Actress. 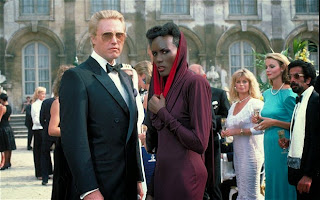 9.) The first time a Bond villain was played by an Academy Award winning actor. Christopher Walken was born to play a Bond villain and he brings his own particular menace and quirkiness to the role as the highly intelligent yet psychopathic Max Zorin. Who can forget his laugh at the end. 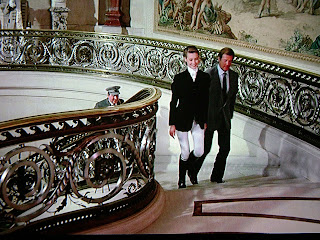 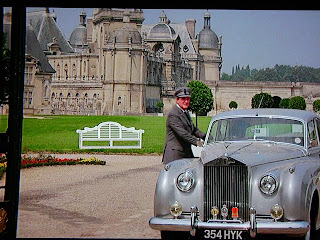 10.) Patrick Macnee as the race horse trainer and undercover agent Sir Godfrey Tibbett. Bond's driver and the banter between Tibbett and Bond is amusing. They have great chemistry. Again, Macnee is probably too old for the role, but it's nice to see him again having enjoyed the cult tv-series The Avengers. (Not the Marvel Avengers)

11.) Bond producer Albert R. 'Cubby' Broccoli's silver Rolls-Royce which he had driven specially from London to Paris to be be used in the shoot. A classy car which is not talked about enough. 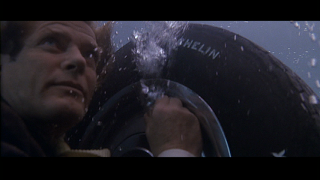 12.) Using the air from the car tire while the henchmen wait for Bond to drown. 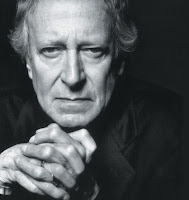 13.) The beautiful score by John Barry. My favorite is That Fatal Kiss, which can stir the emotions, and the score also works great in the action scenes. 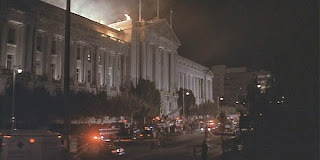 14.) City Hall on fire. Critics point to Stacy Sutton's screaming "James!!"as annoying, yet it's a well-made scene and I believed the fire was a threat.

15.) The fire engine chase and San Francisco in general. What a fun action sequence. The police captain is so funny. "Yeah, And I'm Dick Tracy and you're still under arrest!" 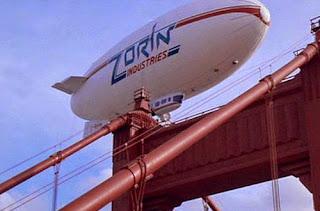 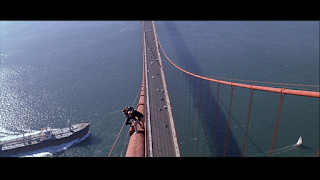 16.) The spectacular Golden Gate Bridge scenes. Before it became somewhat of a cliché to use the bridge in action movies, the air ship sequence in San Francisco was a memorable and iconic climax. 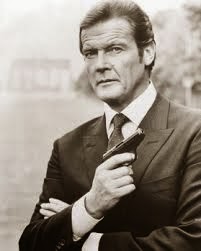 17.) Finally, I admit I'm biased in that Roger Moore for nostalgic reasons is my favorite Bond actor. You could argue Sean Connery, Timothy Dalton and Daniel Craig give a more realistic and gritty portrayal of James Bond, yet I personally prefer the humor and light-heartedness of the 70s and 80s Moore films. I grew up on them and can't be objective.


Have you seen A View To A Kill (1985)? Agree or disagree? What do you like or dislike about the film?

Email ThisBlogThis!Share to TwitterShare to FacebookShare to Pinterest
Labels: In defense of A View to A Kill