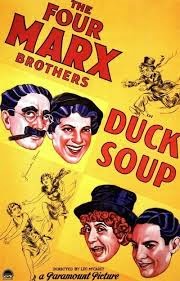 I’ve known about the Marx Brothers for ages, but have always put off delving into their work. This month I finally watched three of their films from a dvd box I own: Monkey Business (1931), Horse Feathers (1932), and Duck Soup (1933). Of the three, Monkey Business I thought had the funniest dialogue, which I watched first. Horse Feathers was ok but disappointed me with its repetitive pattern of jokes. Duck Soup won me over for the most part.

Let’s talk about Duck Soup and what I liked about the film. My favorite sequences are when they exchange hats by the lemonade stand, when he can’t stop the music box, and especially the mirror sequence (image below), which has amazing timing, I’m curious how they shot that scene. According to Wikipedia, the concept of the mirror scene did not originate in this film. Charlie Chaplin used it in The Floorwalker (1916) and Max Linder included it in Seven Years Bad Luck (1921). 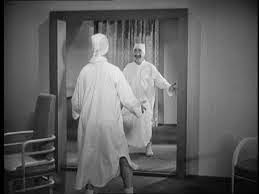 Directed by Leo McCarey, the story is a political satire set in the fictional state of Freedonia, and about how rich folks sponsor idiots. The rich widow Mrs. Teasdale claims Rufus T. Firefly (Groucho Marx) is the most able leader of Freedonia, but she doesn’t base it on facts, and amusingly barely even listens to Firefly’s insulting remarks. I guess you put up with a lot when love is blind, word is she’s attracted to him. She won’t provide much-needed financial backing until Firefly is in charge.

The atmosphere of the film is very staged and contrived, but if you run with that, there are blink and you’ll miss them spurts of witty dialogue, mostly from Groucho. Watch it with subtitles, it’s as fast as a screwball comedy. You've got to work to keep up with him. However he is also a physical comedian, and prone to spontaneous dancing, which is fun to watch.
Besides wise-cracking Groucho, there’s child-like Harpo Marx, for me he’s the funniest, he never speaks, so it’s all body language and pantomime. The story really is just an excuse for the brothers to clown around.

While Duck Soup is praiseworthy, many of the situations I feel are implausible, and would never play out that way in real life, why would ambassador Trentino (Louis Calhern) hire those guys to follow Firefly, and then when they show their stupidity and fail, just let them try once again? Perhaps, as with Mrs. Teasdale, we are laughing at the bone-headed decisions.
To me, the black comedy is similar to Kubrick’s Dr Strangelove, in how minor disagreements could trigger a war. The film also is a running joke on musicals of the era, with the characters unexpectedly bursting into song.

Included in 1001 Movies You Must See Before You Die, Duck Soup is by many considered the finest Marx brothers comedy. A film I want to revisit in future, because you can't pick up on all the dialogue in one sitting.
Favorite quote: “You want to be a public nuisance? Sure, how much does the job pay.”

Agree or disagree? Have you seen Duck Soup or other Marx Brothers comedies? Are you a fan of their style?