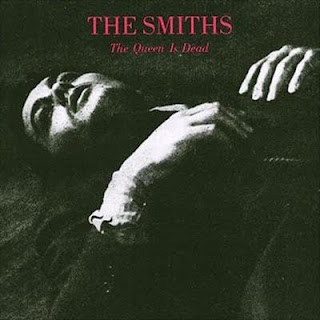 Arguably the greatest record of their career, and considered among the best albums of the 1980s. It has been said there is a real sense of working class anger on the album, with its general dissatisfaction with status quo. There's comedy, tragedy and melodrama.

Tracks:
The Queen Is Dead: a satirical jab at the royal family, and an attack on the moral decay of Thatcher's Britain.
Frankly, Mr. Shankly: is regarded by many as a direct reference to the dispute between band and rough trade boss Geoff Travis, and a comedic take on dead-end employment.
I Know It's Over: Considered one of The Smith's darkest and bleakest songs, about alienation and being an outsider.
Cemetery Gates: More upbeat than the title, describing Morrissey's own visits to Manchester's southern cemetery.
There Is a Light That Never Goes Out: My personal favorite from the record. Could be perceived as a song about adolescent insecurity.
Bigmouth Strikes Again: A Rolling Stones influenced track, Morrissey is probably talking about his own big mouth antics in interviews.

Morrissey: "I became very interested in film history. (The L-Shaped Room (1962), Saturday Night and Sunday Morning (1960), A Taste of Honey (1961), Billy Liar (1963). ) Films with a common thread (...) People in the north specifically, with their tail trapped in the door almost, trying to get out, trying to get on, trying to be somebody, trying to be seen. And I find that very appealing"

Favorite tracks: There Is a Light That Never Goes Out, The Queen is Dead, I Know It's Over, Cemetery Gates, Bigmouth Strikes Again, The Boy With the Thorn in His Side

Favorite lyric:
“And if you're so clever, then why are you on your own tonight?”

The album title is named after a notorious prison in Manchester. Has a lot of good tracks, you could argue lacks the greatness of their previous album The Queen Is Dead. It has been said that Johnny Marr and Morrissey were pulling in opposite directions, Marr wanting to push on and expand the envelope, while Morrissey is pulling backwards and growing more nostalgic. This tension may have been part of the reason for the band's split. Paint a Vulgar Picture is a savage, lyrical attack by Morrissey on the record industry. Maybe these were indications that The Smith's had run their natural course.


Favorite tracks: Stop Me If You Think You've Heard This One Before(a self-parody), Last Night I Dream That Somebody Loved Me(the instrumental intro is haunting), I Won't Share You, Girlfriend In A Coma, I Started Something I Couldn't Finish, A Rush and a Push and the Land Is Ours(a track where Morrissey explores his Irish roots)


Any thoughts on these albums? Have you listened to The Smiths? Or are you new to the band as I am?