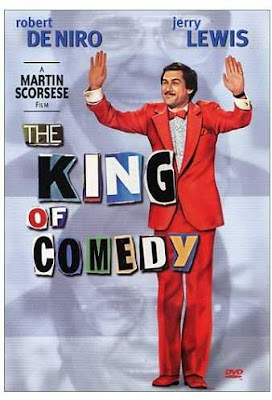 Martin Scorsese's satirical comedy/drama, about Rupert Pupkin (Robert de Niro), a nerdish man in his 30s with dreams of being a television star.

You feel uncomfortable watching Rupert Pupkin, he is not able to see himself from the outside and witness his own bizarre behaviour. You kind of admire his strong-willed and single-minded desire to reach his goal. Even though what he is doing is clearly inappropriate and wrong, I felt like I was rooting for the underdog at times, perhaps because I felt sorry for the poor guy, who is still living at home with his mother.
Its not like he wants to hurt anyone, its more that he wants others to co-operate and fit into his twisted world-view. 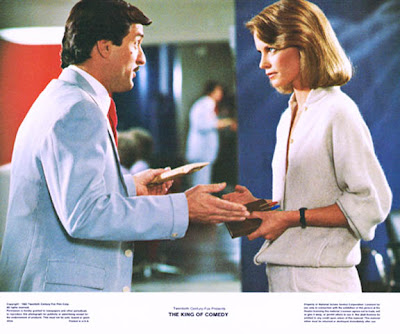 In a way, Rupert Pupkin is similar to Travis Bickle from Scorsese's Taxi Driver, a lonely man in a big city, who desperately wants a change, yet is not able to get what he wants. Rupert does not have the patience to start from the bottom in the stand-up comedian business, perhaps because he is afraid of rejection. Rupert wants immediate change, which is both naïve and impossible. The only friend Rupert has is a fellow celebrity stalker, she is perhaps even more deranged than Rupert is. 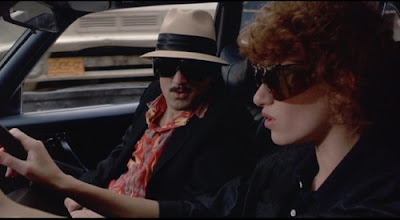 Jerry Lewis plays tv-host Jerry Langford, the comedian they chase and admire. Jerry Lewis' role is blurred, a mix of reality and fiction, Jerry Lewis was a popular entertainer at the time, and in the film portrays, compared to Rupert, a very normal human being.

Some have argued the message of the film is a satire or condemnation of how we overrate and glorify celebrity. On the one hand in terms of making them larger than life and wanting to get close to them, despite the celebrities frequent unwillingness, and on the other hand the selfish desire of ordinary people to strive towards celebrity status despite not having talent or admirable qualities, being famous just for the sake of being famous. Sophia Coppola also explored the celebrity lifestyle in Somewhere (2010) 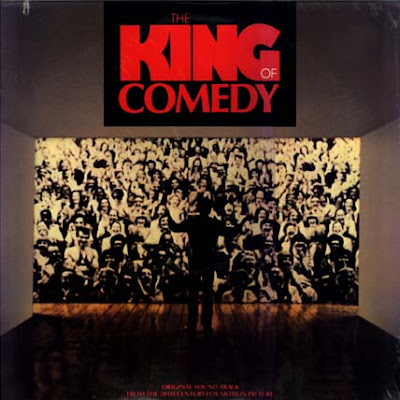 Roger Ebert: “What we have here is an agonizing portrait of lonely, angry people with their emotions all tightly bottled up. This is a movie that seems ready to explode – but somehow it never does” (…) “a movie about rejection, with a hero who never admits that he has been rejected and so there is neither comic nor tragic release – just the postponement of pain. (…) They must have been difficult performances to deliver, because nobody listens in this film; everybody's just waiting for the other person to stop talking so they can start. (…) Rupert Pupkin doesn’t feel cut off from life – he feels cut off from talk shows. His life consists of waiting. (…) The whole movie is about the inability of the characters to get any kind of a positive response to their bids for recognition. (…) “He cannot be rejected, because he cannot hear rejection, with his mind always racing ahead to fantasies of acceptance. (…) Masha, on the other hand, doesn’t want to be Langford, but to have him (…) Scorsese says that both Rupert Pupkin and Jerry Langford remind him of himself. Pupkin is young Marty Scorsese, camped out in agents’ offices, scrounging loans to finish his student film, hustling jobs as an editor in between directing assignments. Langford is Martin Scorsese at forty, famous, honoured, admired, besieged by young would-be filmmakers asking him for a break. (…) One of the reasons the studio was afraid of the movie was that the subject matter is extremely touchy. Since it is well known that Scorsese’s Taxi Driver was seen by John Hinckley before he shot Reagan, The King of Comedy seemed in some circles almost like an invitation to trouble for someone like Johnny Carson.
But are the final shots intended to be real, or another of Rupert’s daydreams? Do they have an occult relationship with the puzzling ending of Taxi Driver, where Travis Bickle also becomes a folk hero?" 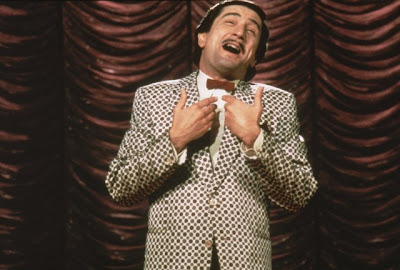 Scorsese originally turned down the script:
“It seemed like a one-joke movie at the time, he said, “But then I began to see that it wasn’t about kidnapping, it was about rejection. (…) The amount of rejection in this film is horrifying. There are scenes I almost can’t look at. There’s a scene where de Niro is told ‘I hate you!’ and he nods and responds, ‘Oh, I see, right, you don’t want to see me again!’ I made the movie during a very painful period in my life. I was going through the Poor Me routine. And I’m still very lonely. Another relationship has broken up.”
“People in America were confused by The King of Comedy and saw Bob as some kind of mannequin. But I felt it was De Niro’s best performance ever. The King of Comedy was right on the edge for us; we couldn’t go any further at the time”
Scorsese: "It’s a violation, the way the paparazzi takes pictures of you, the bulbs and shots of the camera are like bullets.
“It was a clear decision for there to be no difference between fantasy and reality, the fantasy is real”

As The Inquisitor writes in his review. Pupkin’s “the ultimate narcissist, totally unconcerned with the thoughts or feelings of others outside of their reference to his own self image. He appears to spend most of his time fantasizing about his imagined celebrity.”

The King of Comedy ended up costing $20 million and was premiered at the Cannes Film Festival in 1983. Although a commercial failure it attracted five BAFTA nominations and considerable critical speculation. Scorsese said in interviews that the characters of Rupert and Jerry were close to him: the ambitious outsider who will stop at nothing to achieve his goal, and the successful celebrity who despite the admiration is essentially lonely and vulnerable (his own marriage to Isabella Rossellini had ended). 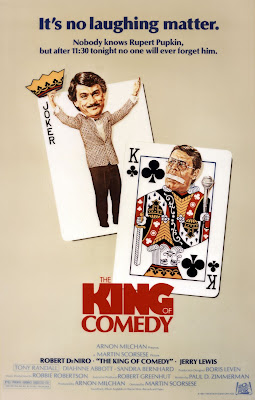 Scorsese later commented that although The King of Comedy was very funny, it was not a comedy.
De Niro has said that the film: "...maybe wasn't so well-received because it gave off an aura of something that people didn't want to look at or know.”

Very funny, I recommend it. See it for the great performance by Robert De Niro. Probably one of Scorsese's most underrated films. The movie questions, how far will you go to be famous? An issue that perhaps is even more relevant today.

Readers of my review, any thoughts on The King of Comedy?

Next week, look out for a revised review of Scorsese’s After Hours (1985)