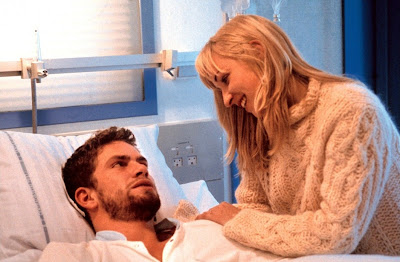 Observant lovers of film will know director Susanne Bier won a Golden Globe for best foreign language film on the 16th January for her most recent effort “In A Better World” (2010) and was nominated for an Oscar a few days ago in the same category. So I thought I’d review a couple of her previous films, which are favourites of mine. Open Hearts, and next week After the wedding (2006). Another highlight from her career is the film “Brothers”(2004) (a US remake was made in 2009).

Open Hearts is a Dogme 95 film from Denmark. Some people don’t like this kind of filmmaking with handheld cameras, like a home video. The advantage of this style is that you are in somebody’s actual kitchen, not a set. The filmmakers according to the dogma rules are not allowed to build another kitchen or change the bathroom. One of the goals of Dogme 95 was to return to the traditional values of story, acting and theme. One of their arguments was that you could make a good film without being dependent on special effects or a big budget. You can read the ten Dogme 95 rules here.

The environment is very realistic in Open Hearts, almost like real life. Some call it a fly-on-the-wall documentary look. Actually, Open Hearts broke a few of the Dogme rules, using fake blood and use of camera equipment. I guess you can argue the rules could be self-restricting as well. 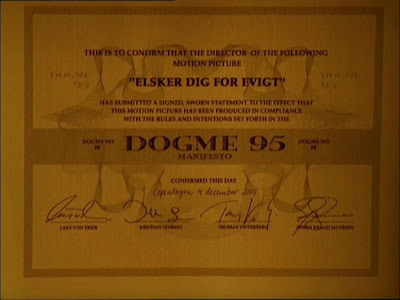 I think Susanne Bier is the 2nd best director from Denmark, Lars Von Trier has my vote as top director from that country. Both directors have reached an international audience and have sustained a high level of releases. You may notice Bier is uncredited as the director on this occasion, I’m unsure why this is.

Open Hearts, or in Danish Elsker dig for evigt (translated: love you forever) has very good performances, especially Mads Mikkelsen impressed me. The story about infidelity and family is powerful and universal. It’s also about what happens to a person who at the beginning of the film becomes paralyzed, and how this character and his loved ones deal with this situation.

I wondered about the credits sequence and the use of lighting, which illuminates the characters. On the DVD, it’s explained by Bier that heat sensitive cameras were utilized, she wanted an X-ray of humans.

I think this is probably also the agenda of the movie, wanting to understand and get under the skin of normal people. Bier explains in an interview, “that things just happen. There is no moralizing at the end” We the audience are left to contemplate the actions of each character, it treats the viewer as an adult by refraining from a bow-wrapped ending.

I haven’t see anybody else in the blogosphere review Open Hearts, which is a pity, as it’s Susanne Bier’s highest rated movie at rottentomatoes with 96%. As a reviewer on RT puts it: “A small-scale domestic drama with large-scale feeling”.

After a while, I forgot it was a Dogme 95 film, probably my favourite of these.

It really does deserve a wider audience, and I am far from being the only reviewer to say this on the web. Available from amazon.co.uk with English subtitles.