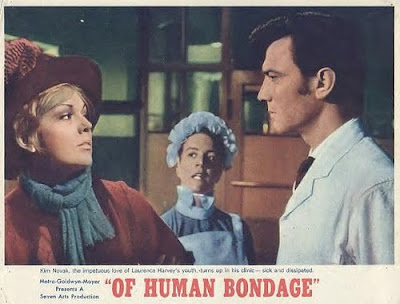 This is a dark love story about obsessive love. Initially, I debated whether to read the novel instead, which is a classic, and regarded as W. Somerset Maugham’s autobiographical masterpiece. In 1998, the Modern Library ranked Of Human Bondage (1915) as #66 on its list of the 100 best English-language novels of the 20th century. But when I saw it was 736 pages, I had second thoughts, this would take days to read, even though the language apparently is simple. Couldn’t I get the same story from the movie, I wondered?

The 1964 film was poorly received on release, but I also heard it was the nuanced performance of Mildred played by Kim Novak, that author W. Somerset Maugham was most satisfied with. It came out a year before Maugham’s death. In contrast, some reviewers regard Bette Davis’s 1934 over-the-top Mildred as one-dimensional, and lacking the kindness that would make Philip fall for her in the first place. The acting was pretty wooden by the main character Philip played by Laurence Harvey, but I still enjoyed watching.

The story is a timeless character study of unrequited, destructive, and obsessive love. About Philip, a failed artist now medical student who doesn’t know when to quit when it comes to Mildred, the promiscuous waitress. She is callous, manipulative, unreliable and constantly uses him and cheats on him, but still he doesn’t get the message. They are two different to be a couple. It’s painful to watch how he secretly suffers and can’t move on. Mildred doesn’t really deserve his attention and love. You could question, who is damaging whom? Some claim Mildred doesn't want to purposely hurt men, but simply doesn't know how to behave better. 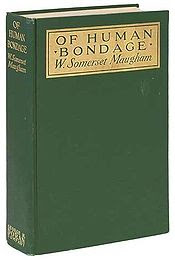 The author Maugham had a stammer, which was likely translated into Philip’s self-conscious clubfoot. Philip Carey feels doomed, always to fail, in life and in love. I didn’t think this aspect worked too well in the movie, he is a fairly handsome guy, why would his foot bother him so much? Probably the novel portrays this more realistically and in more detail through descriptions of his inner thoughts. Still, a good movie, if you don’t have the patience to read the superior novel.

Fans of the book will no doubt be more critical than I have been. Coming to the story with fresh eyes probably adds to the interest.

Although, if you have gone through a similar ordeal to Philip, then it might be a painful viewing experience!

According to sources, the phrase "of human bondage" comes from the title of a section of Baruch Spinoza's "Ethics"(1677), and refers to the philosopher's claim that feelings and passions tend to interfere with a person's reason and intentions. Emotions enslave people if they are not careful, said Spinoza, no matter what they want to do with their lives.

The story “Of human bondage” has been called “a beacon of light by which the wanderer may be guided”. Author Maugham does his best to pass on his life lessons. Perhaps Philip was his own worst enemy?

Readers, any thoughts on the book or film?