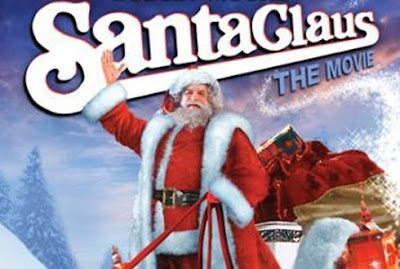 This is my favourite Christmas movie ever. Granted, Gremlins (1984) is also, but that was not strictly an Xmas film in my mind. I didn’t find It’s A Wonderful Life until much later.

They seemed to show Santa Claus - The Movie on TV every Christmas in the UK when I grew up. It’s probably my first movie memory, I was not very old when I first saw it, maybe 5 or so, so it’s obviously very nostalgic. Heck, I even rented this film once as a child when it wasn't even Christmas! It would appear from youtube the movie has a larger following in the UK than other countries due to aforementioned repeated screenings.

The whole atmosphere of the film is so “Christmassy”. There was something about those candy bars in the back of the flying vehicle, which caught my imagination. It kind of makes you still believe in Santa Clause. The effects still hold up pretty well, especially the reindeer sleigh-rides, they had a budget of 50 million dollars, which in 1985 was huge. The actors I thought were perfectly cast, the short actor Dudley Moore as the small elf Patch, the fatherly David Huddleston as Santa Claus, and John Lithgow as the sinister toy manufacturer. 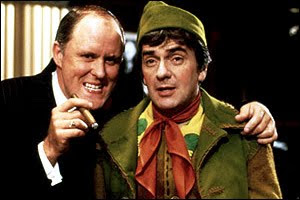 The story is partly about the origins of Santa Claus and might even get you interested to find out more about the history of the real Saint Nicholas.

I was shocked to discover that rottentomatoes and IMDB absolutely killed this film with their rating system. I usually agree with them, but this time, I totally disagree. I am not the only one, plenty of people are positive on youtube and imdb. I guess you'll just have to trust me on this recommendation.

The kind of harmless entertainment where you can put your feet up, and relax on a cosy couch with your family, and a warm cup of coco, while it’s freezing outside. And just escape into this magical world the filmmakers have created.

Probably will appeal more to kids, but really gets me in the mood to celebrate Christmas. One of those you can easily rewatch. As some guy on youtube says, it ain’t Christmas without this movie.

Could this be the most underrated family film ever!? What movies get you in the Christmas spirit?