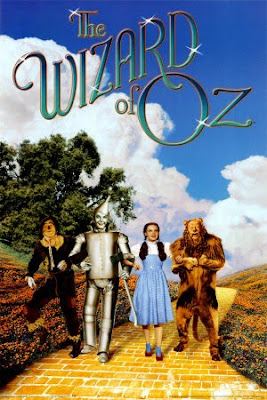 This was one of my favourite films as a kid. So colourful and imaginative. And such a universal appeal to young and old. I recently rewatched it. You get the feeling anything could happen in this universe. This film is so different to anything else I’ve seen, and I mean that in the best of ways.

It all starts in Kansas, the memorable brown/grey colour (sepia) is like an old photograph from the past, where Dorothy grows up on a farm with her dog Toto. It’s sometimes forgotten that this was a children’s book series. L. Frank Baum's "The Wonderful Wizard of Oz" is one of those novels which has been eclipsed in fame by the movie based on it. Perhaps because the book doesn’t include the memorable songs, and ruby slippers, for example. The book includes creatures that are left out of the movie, so book and movie are each there own thing.

I remember looking forward to watching this film once a year at Christmas on TV as a kid, and being really freaked out by the scary wicked witch with green makeup. I think I might even have believed she was a genuine real life witch! The most frightening bit to me is when the witch looks directly at the camera during a scene at her castle. That really is creepy, even today.

The effects are amazing, the tornado especially in the opening shot, how did they do that? Other effects I was impressed by were the spinning farm house in the storm, the flying witch and monkeys, the yellow brick road sets, emerald city from a distance, I could go on and on. It wasn’t easy to achieve. The spray paint gave the actor playing the tin man a lung scare, and they didn’t even tell the replacement tin man it was dangerous according to the making of. 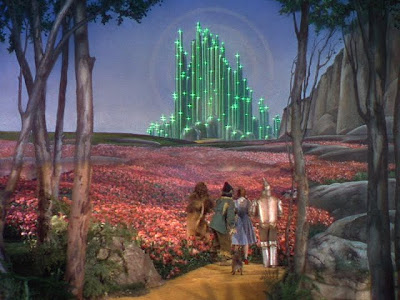 I think the filmmakers did a great job creating an illusion of depth, endless landscapes, yellow brick road, and poppies as far as the eye can see. The opening shot of a road in Kansas reaching into the distance reminds me of scenes in Zhang Yimou's The Road Home (1999). Director Zhang Yimou may also have borrowed for his film the excellent idea of a non-colour intro, followed by colourful scenes. The winter scene below is comparable to the image above of Emerald city in the distance. Even the title "The Road home" smells of a homage to the 1939 movie.

I never really perceived The Wizard of Oz as a musical, but it actually is. According to the dvd, Shirley Temple was considered for the role of Dorothy, but Judy Garland got the part, because she was the better singer. IMDB in their FAQ strangely enough disagree with this, and say Judy Garland was always first choice.

It seems hard to believe now, but the song “over the rainbow” was originally cut by executives, as they thought it slowed down the film. They reckoned it was undignified to have a star sing in a farm yard. Luckily they reconsidered.

The director Victor Fleming said he made the film because he wanted his two little girls to see a picture “that searched for beauty, decency, sweetness and love in the world”.

No wonder David Lynch paid homage to the movie in "Wild of heart" (1990). Lynch's films are full of dreams, he has mentioned "The Wizard Of Oz" is one of his favourites.

It’s interesting the scare crow, the tin man and the lion each have a flaw, they wish to redeem. The only thing Dorothy wants is to go home, but does this imply she is perfect without flaws? Perhaps it is wrong of me to read anything too deep into this children’s adventure. Some have also questioned Dorothy’s desire to go home, why would she want to leave such a magical place, where she has made new friends? The timeless message of the film is probably captured in the song “over the rainbow”.

This is more than a movie, it’s part of pop culture. Why don’t they make films like this anymore? I don’t think I’m far off, if I call this one of the greatest achievements in film history. A must-watch.