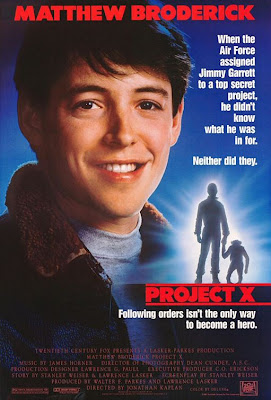 You seldom see Project X on any best of the 80s lists, but it really is a gem in my opinion. As another reviewer puts it, it’s easy to like this movie. Especially if you have a soft spot for animals.

The story mostly takes place on a military base, where Air Force pilot played by Matthew Broderik is assigned to help look after some monkeys, but he is at first not told what will happen to them. He turns out to be very good at handling the animals. He develops a friendship with the brightest monkey called Virgil.

I am amazed how well the animals “acted”. The monkeys featured were so good at showing emotions, and I felt a true connection to them. No CGI crap here, thank god.

The movie has a definite anti-militarism theme, which to me is a little ambiguous. Without giving too much away, the experiments are in a way for the greater good. But in the case of Virgil the monkey they have crossed the line. You could argue the experiments are a waste of time, as monkeys react differently to humans.

Never been a huge Matthew Broderik fan, but this along with Election (1999) are my favourites of his films. Also interesting to see Helen Hunt (from ‘As good as it gets’) in one of her earlier roles. She seems to be playing someone older than her age here, or maybe that’s just me?

Directed by Jonathan Kaplan, who later would make more grown up movies like ‘The accused’ and ‘Love field‘.

You could probably call Project X the sister film to Gorillas in the mist (1988). Granted, GITM is a more mature, adult film. Project X is a family adventure.

I recently revisited this movie having not seen it in years, and felt it held up very well and I enjoyed it again, even though I’m in my 20s now. The characters are very warm-hearted, which I like. Rewatching some of these childhood nostalgic movies, I can definitely see a pattern, as flying for some reason appears to be in a number of my favourites.