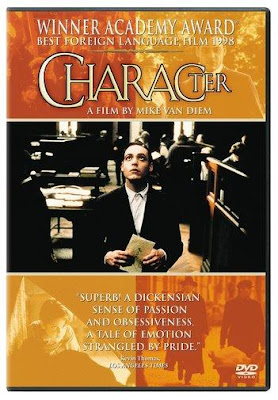 You seldom hear about any films from The Netherlands, but I liked this one a lot.

Based on the best selling 1938 Dutch novel ‘Karakter’ by Ferdinand Bordewijk, and directed by Mike Van Diem, the film won the best foreign language film Oscar in 1998. I saw it with English subtitles.

The story takes place in the Netherlands of the 1920s and revolves around a complex father-son relationship. The relationships to the mother and also the secretary love interest are also fascinating.

Like the author Franz Kafka, the protagonist cannot escape his father, perhaps the son and father want to love one another, but their hateful feelings make it a struggle for them to express their love. There are no easy answers to this story. I like that the murder at the beginning is about why, not who.

The cinematography was beautiful, and the colours felt similar to the likewise Oscar winning German movie 'The Tin Drum' (1979). Some reviews also compare the film to Charles Dickens.

I recommend you see it, the story stayed with me. Unlike a lot of shallow rubbish out there, it felt similar to a novel with multi-layered characters, which demand thought from the viewer. Much is left unsaid you can interpret, for instance the title ‘Character’. Suitable for a mature audience, I think you can easily watch it again. A film to discuss afterwards with friends or family.