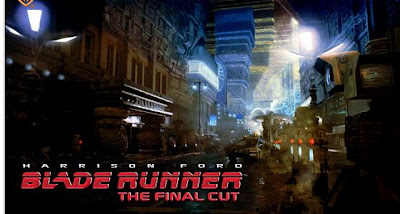 This recommendation also contains my summary of the making of documentary from the final cut DVD.

Blade Runner was originally called Dangerous days, which is now the title of the making of. Ridley Scott at first turned down the movie, as he was attached to another science fiction film 'Dune', which David Lynch would finally make.

R. Scott calls Blade Runner a futuristic urban film noir. Very dark and similar to a Philip Marlowe detective story, but told with compassion. Some of the darkness of the film could be attributed to R. Scott’s brother dying of cancer before the shoot.The making of is very long, there were many problems during the production. 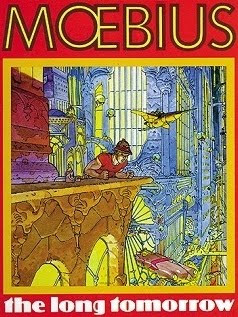 The visuals were among other things influenced by Heavy metal, a comic magazine, which Scott had read. Notably the work by French artist Jean Giraud, AKA "Moebius". One story in particular from the mid 1970s, called "The Long Tomorrow", written by Dan O' Bannon and drawn by Moebius, was a major influence on the visual design.

The Blade Runner story is also based on Philip K. Dicks novel Do Androids Dream of Electric Sleep, which is from 1968, where the human/machine discussion is visible already in the title. I reviewed the book here.

R. Scott is a very visual director. Unsurprisingly, Scott was in charge of the art department on Blade Runner. One of the reasons they shot it at night was because the buildings wouldn’t look tall enough. According to Scott, the sets would have looked bad in daylight, so it saved money to conceal things with smoke and darkness.

A bit of trivia, the neon circle symbol in the background of the café actually means ‘origins’ in Japanese, as the film is about where we come from and who we are. The symbol also looks like the earth, but different. The close up of the eye ball also resembles the planet earth.

Dustin Hoffman was originally to play Deckard, but the role went to Harrison Ford. Daryl Hannah’s eye make up was actually inspired by Nosferatu (1922).

Critics called it a science fiction art film, but lacking in story. It has since been called a ground breaking piece, which redefined how science fiction films could look and feel. Maybe it was ahead of its time, as you can see it has inspired the atmosphere in such movies as The Matrix or even Blade. It came out when movie goers were flocking to see happy movies like ET and many other good releases in the summer of ‘82, and that killed some of Blade Runners business. 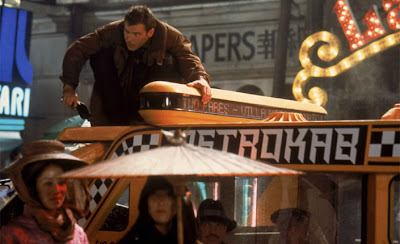 People were confused that Harrison Ford usually played the tongue-in-cheek hero in Indiana Jones and Han Solo in Star Wars, and didn’t expect hero’s to behave like in Blade Runner, this might explain the weak box office. Movie critic Roger Ebert was critical in his review, he thought the only way you could distinguish people from the replicants, was that they said they were replicants.

Blade Runner was accepted more by critics and audiences, when the director’s cut came out in cinema’s 10 years later in 1992, they altered the ending and removed the voice-over, which some people thought were unnecessary. The weird ending from 1982 was taken out, which was footage shot for the beginning of The Shining (1980) would you believe that Ridley Scott due to budget problems had been allowed to use by Stanley Kubrick.

The dark dystopia atmosphere didn’t appeal to everyone. It also has a traumatic emotional side. The film was about an oppressive corporate culture. It’s a cautionary piece, it’s telling us to beware about were we are heading, look what we can do to each other. Don’t be a replicant, don’t be someone who just follows orders. Be someone who has a monitor on your own empathetic pulse, be human which was the point of the whole of Philip K. Dicks career.

Blade Runner is at times a spiritual experience, the Vangelis music contributes to this. Here’s a beautiful Vangelis song called ‘Memories of green’ from the soundtrack:

A ‘final cut’ was also released By R. Scott in 2007 to mark the 25th anniversary of the theatrical release, adding more, and removing mistakes like a stunt double running through glass with the wrong hair colour. Although you would have to be a hardcore fan to notice, it didn’t bother me. In this way, you can compare it to Star wars, both are cult movies in several versions.

There has been talk of Deckard being a replicant himself, and this has added fuel to the fire about the film and creates interest in rewatching the various versions.

R. Scott has hinted Deckard IS a replicant on the the final cut DVD. This raises questions about what makes us human, if the replicants can feel and think. If we should play God by creating replicants? And do we have the right to control other independently thinking beings? How much responsibility should clones be given? Fellow movie blogger 'Suspend Your Disbelief' points out:
"The defining trait of the replicant used to be that it was emotionless. Yet many humans act selfishly and without emotion, and these replicants had feelings and showed compassion. The lines between man and machine become very blurry".
Obviously questions, which become increasingly relevant to day with the technology allowing us to clone sheep etc.

I think many of Scott’s films seem to be more style over substance. But I would say of the titles I’ve seen so far, Thelma and Louise, Gladiator, and Blade Runner are Ridley Scott’s most thoughtful.

Maybe the very visual Avatar (2009) in the same way will get more acclaim by the critics in the future, when the layers of the story are better understood? I think there are several comparisons between these two films:
1.) Both are beautiful, eye candy movies set in the future with great special effects, which were ahead of their time for the way they look.
2.) You need to see them on the big screen for the best experience.
3.) Plus, both films have initially been criticized for lack of story, but maybe the story is not the most important part, instead you might go for an experience like "2001: a space odyssey".
4.) Also, Avatar and Blade Runner both have almost no surface message, instead you have to make your own assessments. The empty spaces in both films leave room for interpretations like my analysis above of cloning, which is not in the script of Blade Runner.
5). Avatars are in a way kind of similar to replicants, both are substitute humans. The difference being avatars are an alter ego, a computer user's representation of himself/herself, while a replicant is a bioengineered or biorobotic being.

As this is a review of Blade Runner, I will refrain from any furthur talk of Avatar here, which I may review at a later stage.

If I had to point to a weakness in the Blade Runner script, it would be, why does Deckard hunt the replicants, if they are going to die within 4 years anyway?

My favourite scene is when Rutger Hauer makes his famous speech on the roof, so emotional, relaxing and meditative together with the Vangelis score. A segment I can rewatch over and over:

Blade Runner is more impressive in the cinema, but so are many of Ridley Scott’s films. The effects still hold up, I think. I still enjoy watching it occasionally.

Any thoughts on Blade runner, readers?
Posted by Chris at Tuesday, June 08, 2010