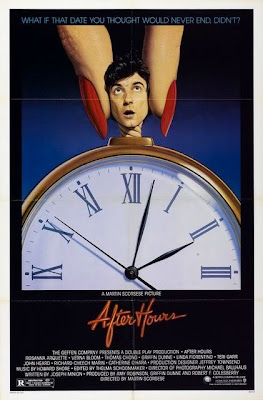 A drama/comedy that takes place in a single night in New York. It’s a very unpredictable story, the beginning doesn’t prepare you for what will happen later. The characters slowly reveal themselves. Originally titled Lies, then A Night in SoHo, the story follows the misfortunes of Paul, a young computer operator, who accepts an invitation from an attractive women he’s met in a diner.

The atmosphere is very unique to me in this film, it’s along with the excellent music almost a character in its own right. The making of calls it “nightmarish” or “surrealistic”. I thought the acting by Rosanna Arquette was poor, though.

There is a high level of suspense in After Hours, which is technically a comedy but plays like a version of the classic Hitchcock plot formula about the innocent man wrongly accused. Film critic Roger Ebert: “The plague of bad luck seems generated by some unexplained divine wrath.”

It was shot entirely at night, sometimes with on-the-spot-improvisation of camera movements. In the making of they explain Tim Burton was going to direct, but because Scorsese’s 'The Last Temptation of Christ' fell apart in early 80s, Scorsese became interested and directed After Hours, and Burton withdrew from the project.

Scorsese has suggested that Paul’s implacable run of bad luck reflected his own frustration during the Last Temptation of Christ experience, where his Jesus film couldn’t get made in the early 80s. Agents promised him a “go”, everything was in place, and then time after time an unexpected development would threaten everything. In After Hours, each new person Paul meets promises that they will take care of him, make him happy, lend him money, give him a place to stay, let him use the phone, trust him with their keys, drive him home – and every offer of mercy turns into an unanticipated danger. The film could be read as an emotional autobiography of that period in Scorsese’s life.

One of Scorsese’s lesser known films. In my opinion this film doesn’t get enough credit. People always seem to talk about his other work. It’s not your typical Scorsese movie at all, very little violence or swearing, closer to The King of Comedy than his gangster movies. I’m glad De Niro didn’t appear, refreshing to see a relative unknown in the lead in Griffin Dunne. 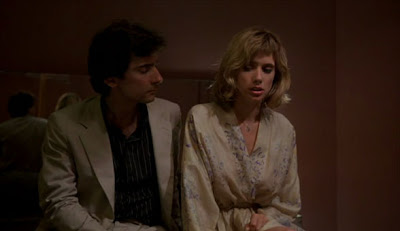 Not a film everyone has heard of. It's now in my top 5 Scorsese movies along with Taxi Driver (1976), The Last Temptation of Christ (1988) and The King of Comedy (1982). Never been a fan of Scorsese's gangster stuff or any gangster movies for that matter. You may notice I haven't added gangster flicks or westerns on my A-Z of film recommendations on the blog, because I don't usually like them. An exception to the rule is The Sting (1973), which I enjoyed.

After Hours brought Scorsese the Best Director prize at Cannes, although its commercial success was modest.

Probably not a film I’ll be seeing many times, as the surprises are more effective first time around, but enjoyable to watch once or twice, I'd say. I’m not sure you can call it an independent film, but it certainly feels like an indie.

Have you seen it, what did you think of After Hours?