Albums of the month: September 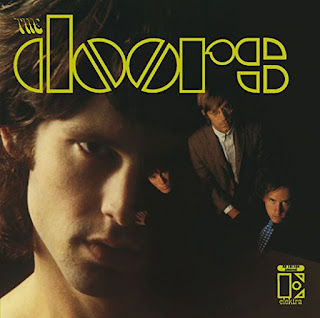 Recently went on holiday (more on that later), so the two posts today are slightly later than usual. Still had time to listen to a variety of newer and older albums.

The Doors by The Doors (1967)
Amazing debut. 5 classic songs: Break On Through, The Crystal Ship(my personal favorite), Alabama Song, Light My Fire, The End. The filler tracks prevent it from achieving a perfect score.
9/10


Blade Runner (Esper Edition) by Vangelis (1982/2003)
My all-time favorite soundtrack which never fails to enrapture me. A two-cd bootleg, collecting music related to the film.  To me, the 114 minute Esper Edition is superior to the official 57 minute soundtrack from 1994. Many of the sound effects from the film were omitted on the official soundtrack. The Esper Edition is among the highest rated bootlegs of all-time on Rate Your Music, and should please most fans of Blade Runner, though apparently there is a 3-cd MR3 Edition.
10/10


Faith by George Michael (1987)
Won Grammy Award for Album of the Year in 1989. The first four songs are very good. Faith & Father Figure are 80s classics. I Want Your Sex is well-produced and held my interest despite running 9 min. One More Try showcases Michael's ability as a singer.
Tracks 5-8 didn't interest me. Track 9 Kissing a Fool is well-written and encouraged me to google the philosophical lyrics. Bonus track A Last Request is smooth and quite good.
Looks like he is smelling his own armpit on the album sleeve /:
7/10


Twin Peaks: Limited Event Series Soundtrack by Angelo Badalamenti (2017)
The soundtrack for season 3 of Twin Peaks. I’m pretty sure will remain in my top 5 albums of the year. The set includes 3-4 tracks from the early 90s. Badalamenti's new score is juxtapositioned with various artists from past and present.
I like the new instrumentals, especially Accident / Farewell Theme, Windswept by Johnny Jewel, The Chair, The Fireman, Saturday (Instrumental) by Chromatics, and Heartbreaking. Nice to have Threnody for the Victims of Hiroshima on here too, used during the atomic bomb sequence from Episode 8. The new stuff isn't as distinctive as Badalamenti's best work, but it feels like Twin Peaks music, is competently made, atmospheric, and sometimes quite moving.
If you have to choose between buying Twin Peaks: Limited Event Series Soundtrack or the instrumental album Windswept by Johnny Jewel, I'd pick the former.
7/10


Sleep Well Beast by The National (2017)
To me, despite the critical praise, it's a lesser album from a band I usually like. Has the familiar Berninger baritone and melancholy, though the lyrics didn't resonate as deeply as previous National albums. Walk It Back goes for tongue-in-cheek-ness but isn't as potent as their serious music. Wasn't a fan of the production choices. At times, the drum programming, electronic sounds, and keyboards are frankly annoying.
That said, The System Only Dreams in Total Darkness and I'll Still Destroy You (about self-medication) are powerful and superbly written.
Doubtful Sleep Well Beast has the same replay value as their earlier work.
Favorite lyrics: ”But he had to deal with those people like you who made no goddamn common sense”
”I’m always thinking about useless things”
"I'm just trying to stay in touch with anything I'm still in touch with"
"I swear you got a little bit taller since I saw you, I'll still destroy you"
"Maybe I listen more than you think"
5/10


Science Fiction by Brand New (2017)
The meaning of the title (Science Fiction) alludes me for now. A critically acclaimed and commercially successful return by a band who have not released a studio album since 2009’s Daisy. The Nirvana-esque 137 is very good, and Same Logic/Teeth stayed with me. There's some quite beautiful guitar work on tracks such as In The Water, Desert, and 451, but not sure I love the vocal. The melancholy closing ballad Batter Up is the album's most emotionally affecting moment.
Perhaps you need to be a fan of the band and Emo to fully appreciate what they are doing here on their final LP. I don't have context or nostalgia.
6 to 7 /10


Cigarettes After Sex by Cigarettes After Sex (2017)
Recommended by RYM-user jonlanghoff. Most of these songs have the same Beach House-esque sound, so I'm not sure how original the album actually is. Yet it's infectious, calming, and easy to get lost in the hazy mood the band creates. The lyrics are effective and the slow delivery elevates the words. I was surprised to find out the vocalist is not a woman?! Over time, could rise to a 7/10.
6 to 7 /10


Music for People in Trouble by Susanne Sundfør (2017)
I listened based on the favorable reviews. Slow, minimalist folk. Undercover, Bedtime Story and Reincarnation are the tracks that interested me the most. The outros from the title track & No One Believes in Love Anymore are quite haunting. She has a good voice, but the album has too many boring songs.
5/10


The Weather Station by The Weather Station (2017)
Very patchy. The opening two songs (Free & Thirty) are strong for the melodies. Impossible and You and I (On the Other Side of the World) have energy and a nice production. A pity the rest of the album is a bit dull and uninvolving. Her vocal is similar to Joni Mitchell.
5/10


American Dream by LCD Soundsystem (2017)
I don't understand the high ratings on RYM and praise in the press. The songs are overlong and a struggle to even finish. The synthesizer often sounds cheap, although I did like the synth work at the end of the track American Dream.
As others have said, reminiscent of Talking Heads, only not as effective. The good news is the writing is satisfying.
Call the Police and Oh Baby are the strongest moments on an album that I didn't enjoy.
4/10


Wonderful Wonderful by The Killers (2017)
I enjoyed Brandon Flowers' 2015 solo album The Desired Effect, unfortunately this new Killers album is not nearly as good and lacking in emotion. The Man is a catchy pop single, although I disliked the over-confident lyrics. I've read the song possibly is a sarcastic jab at those in our culture who believe that they really are sitting on the throne, men who say with a straight face, "I'm the man!". I still find the swagger distasteful.
I like Some Kind of Love which is the only track here that made me feel something.
The 80s inspired synth production on Tyson vs. Douglas works, and it arguably ought to have been a single, but again, the lyrics should have been better, about a 1990 Mike Tyson boxing match.
4/10