Albums of the month: October 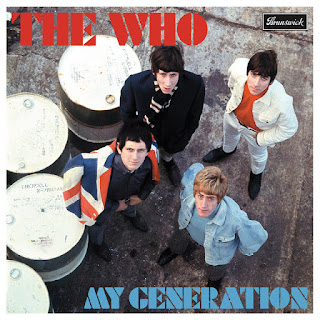 My Generation by The Who (1965)
I admire this record, I don't love it. Lots of pop hooks on tracks such as La-La-La Lies, My Generation, The Kids Are Alright, and A Legal Matter, but I didn't connect emotionally with the music. The most surprising tune is the wild instrumental jam The Ox. I talked to my dad about the audiences who listened to this type of music. Whether the band members were mods themselves is debatable, although The Who had a mod following. Perhaps the group were confused about their own identity at this early stage, having changed labels and altered their name three times within a year. He told me about the mods and rockers conflict which was before my time. The mod subculture seems to have come and gone.
6/10

Rising by Rainbow (1976)
Thanks to Steven at The Void-Go-Round for the recommendation. I finally gave this LP a try. A hard rock/heavy metal band I was unfamiliar. Rainbow was formed when guitarist Ritchie Blackmore left Deep Purple over creative differences. Rising is often considered Rainbow's best work.
A compact, intense album at just 33 minutes. There's a lot to admire here, the various aspects of the musicianship, and the towering vocal by Ronnie James Dio (of Dio fame).  The epic Stargazer is the stand out, although I think I prefer Tarot Woman with its synth intro and impressive guitar work.
8/10


Flowers in the Dirt by Paul McCartney (1989)
Receiving favorable reviews at the time. When it's good, it's really good. We Got Married is my favorite, elevated by David Gilmour on guitar. This One has a great melody and must rank among the best Post-Beatles McCartney singles. Rough Ride is enjoyable and the trumpet part fits well. I used to enjoy Distractions, though has lost its sting, maybe because it's so repetitive. The dance pop closer Où est le soleil? (a single included as a bonus track on the reissue) would be ideal for a road trip or disco playlist.
Elvis Costello can be heard as guest vocalist in You Want Her Too. Apparently there were creative differences during the making resulting in replacing Costello with other producers. The lost Costello/McCartney recordings can be found in the reissue package.
A fun, ambitious pop album, with a lot of instrumental experimentation. Listening on a proper sound system is the way to go, which brings out the layered production.
7/10

Jagged Little Pill by Alanis Morissette (1995)
Could pass as a greatest hits album, there are many career-best songs.
9/10


The Ooz by King Krule (2017)
Album of the year contender. Archy Marshall is only three albums into his career (including his non-King Krule LP). For me, he is lyricist of the year and The Ooz could well be his magnum opus. The opening line "I seem to sink lower" is an indication of what to expect. His music isn't for everyone and evades typical genre classification. Melancholy, introspective art rock/jazz/spoken word is what you could label it as. A gloomy album to put on when you're in the mood for that. As opposed to fast paced hip hop, Marshall's deliberately slow, sad vocal delivery allows the listener time to reflect, and there's a timelessness to the lyrics and emotions. Weaknesses, there are minor tracks here such as (A Slide In) New Drugs, and 66 minutes and 19 tracks in one continuous sitting is a bit excessive for this type of dark music. It requires an investment for the music to be moving and impactful.
The artist explained the album title: "from back in the day with my band Zoo Kid; his (brother's) band was called Words Backwards. We got together and merged our bands, so we formed "zoo kid" backwards, which was Dik Ooz. Which is pretty disgusting"
8.5/10

Plunge by Fever Ray (2017)
Lacks the big radio singles of the 2009 solo release, but contains enjoyable electropop material w/ pretty good lyrics. The instrumental title track got stuck in my head for the synth production. Red Trails has a pleasing mix of violin and electro. The closer Mama's Hand might be the best moment. I like the single To the Moon and Back.
On second listen the sound I found a little harsh and disagreeable in some places, but a consistently good and cohesive record. Think will hold up to many plays, which isn't the case with most new albums these days. Only available as a digital release in 2017. Will be released physically on vinyl and CD on 23 February 2018.
8/10

Blade Runner 2049 by Hans Zimmer & Benjamin Wallfisch (2017)
Works fairly well with the images and a big sound system in the cinema. As a stand-alone experience at home the new score is unremarkable and a chore to sit through. What generated much of the emotion and atmosphere in the 1982 original was Vangelis’ amazing soundtrack. Zimmer/Wallfisch try to recapture that, but the new score is nowhere near as good. Not something I'd listen to again, in contrast to Vangelis' classic soundtrack which is endlessly playable.
There are brief moments of brilliance, but they are all too short. A modern synthesizer piece that stands out is during Mesa, a segment that is repeated in the track Blade Runner. There's a haunting outro on That's Why We Believe, and parts of Sea Wall are beautiful. This soundtrack isn't Zimmer's best work and I disiked Almost Human by Lauren Daigle. Should have hired Vangelis. My rating is for the stand-alone listen. Just to be clear, I'm not rating the Elvis and Frank Sinatra songs.
4/10

Weather Diaries by Ride (2017)
Ride is a blindspot for me. All I know is they are considered an important act from the early 90s shoegaze movement.  In the same vein as Slowdive's comeback, Weather Diaries is fan service, bringing back Ride after an absence of 21 years.
Lannoy Point, Charm Assault, Home is a Feeling, and Weather Diaries are tracks I'd want to return to, the rest are rather bland.
5/10

Visions of a Life is Wolf Alice (2017)
There's quite a bit of hype surrounding this UK band, and some critics claim the album is one of 2017's best.
Heavenward, Beautifully Unconventional, and Dont Delete the Kisses are three memorable tracks on the first half. One or more of these have a good chance of featuring in my upcoming top 100 songs of 2017.
The record can't sustain the early promise. Perhaps Wolf Alice are destined to be a band who release impressive songs (Silk was the stand out on their debut), but hit-and-miss albums. The closing title track Visions of a Life is good for atmosphere and guitar work.
5/10

All American Made by Margo Price (2017)
Her singing on this isn't as novel as last year's brilliant debut album, but All American Made has its moments. Especially the opening three songs stood out. I'm certainly interested in getting the cd, and seeing if will grow on me. Like on Midwest Farmer's Daughter (2016), her lyrics are personal yet relatable. According to the New York Times article, she "Tells It Like It Really Is".  Though sometimes sticking too close to the same formula, there is a willingness to experiment with the Willie Nelson duet Learning to Lose and adding (gospel?) backing singers on Do Right By Me and All American Made. There's also a surprising sound bite (is it Bill Clinton?) on the closing title track  If you were a fan of Price's first LP, I think you'll be satisfied with the second LP.
7/10


Masseduction by St. Vincent (2017)
I think her music tends to be overrated, but the 2014 self-titled album was enjoyable, so was curious to give Masseduction a try. There's plenty of variation and pop hooks. The opener Hang on Me showcases her vocal. Pills has an irritating start and nice finish. On Masseduction, she channels Alison Goldfrapp. Sugarboy is playful and possibly samples Donna Summer's I Feel Love. The single Los Ageless is catchy, even if the lyrics "how could anybody" do get old fast. Happy Birthday Johnny is a simpler, more conventional birthday song, and might be my favorite of the bunch.  The song New York, I'd love to know more about the hero/friend, those lyrics (including the swearing) have got stuck in my head. The vocal performance at the end of Young Lover is powerful.
Good, but not a life-changing album. To me, it's flavour of the month music. That was the case with her 2014 record as well. Reviewers calling Masseduction a "masterpiece" is a bit over the top. I'm really confused about what to rate the album. I like quite a few tracks here, so I might be underselling it. Listen to Masseduction yourself and make up your own mind!
6-7/10

Colors by Beck (2017)
Too polished to elicit much emotion, but the breazy singles are entertaining enough. Especially fun is the piano-driven Beatles-like Dear Life. Dreams is Beck at his best.
5-6/10

Glasshouse by Jessie Ware (2017)
Boring, vapid love songs, with the occasional strong pop single (Midnight, Selfish Love, Alone). The closer Sam feels more personal and experimental.
To me, Tough Love (2014) is her most rewarding album, and the LP she's done with the least amount of filler, and most replay value.
5/10

ken by Destroyer (2017)
I like his elusive, dark lyrics. Slightly more memorable than Poison Season (2015), but not able to better career peaks Kaputt (2011) and Destroyer's Rubies (2006).
Tinseltown Swimming in Blood is an album highlight, and other tracks have potential to grow on me.  The lyric repetition at the end of songs is a bit tiresome, although it works very well on the track Ivory Coast.
"Should've seen it coming
Should've taken care
Should've tried pretending that anything was there" (from Sky's Grey)
"Good things come to those who wait forever" (from Ivory Coast)
6/10


*This year, I listened to the discographies of Led Zeppelin, The Doors, and Cream. Saving those reviews for a post on each group.