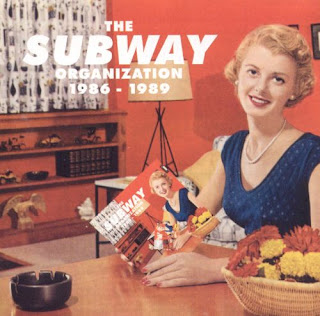 Suitable for those nostalgic for these 80s UK bands, or simply listeners (like me) who are curious about lesser known music from the era. The compilation consists of music from the Subway Organization, an independent music label founded in 1985 in Bristol. Cherry Red went on to distribute the 2005 Best Of.
I had already enjoyed the two Choo Choo Train tracks (High, and Flowerfield) which was how I stumbled upon the compilation on Spotify. There’s too much average material for a best of, although I did uncover some fine tunes, see below:

Shimmer by The Flatmates (1988). Haunting for the guitars and vocal, and to me the jewel of the collection. The founder of the Subway label, Martin Whitehead, is the guitarist. Debbie Haynes on vocals. Surprisingly the band would only release an EP and singles.


Glastonbury by Rodney Allen (1986). A change of pace, a slower, piano driven number. Quite endearing, despite its sentimentality. Besides his solo work, Allen had a brief spell in The Chesterfields (see below), and joined Bristol based The Blue Aeroplanes.


Completely and Utterly by The Chesterfields (1987). A Smiths-esque sound. They released four albums between 1987-1995, which I’m curious to look into.

Email ThisBlogThis!Share to TwitterShare to FacebookShare to Pinterest
Labels: 1980s