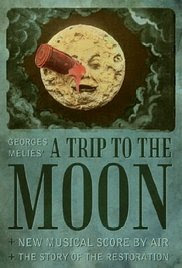 A Trip to the Moon (aka Le voyage dans la lune). The iconic 13 minute silent film by Georges Méliès. A group of astronomers go on an expedition to the moon. For its time, a landmark achievement for special effects. Be cautious of youtube, many videos don't include the ending. A restored hand-tinted version was presented at the 2011 Cannes Film Festival with a soundtrack by the French band Air. Music by Air works well with the images, in fact I prefer the album combined with the film. Having watched color and black & white versions, I have to admit the color version was easier to follow what was going on. The first known science fiction film.