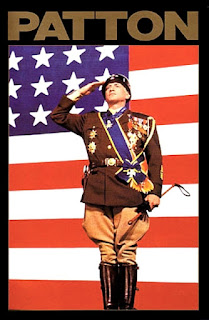 A WW2 epic which won 7 Oscars. The opening is what the film is best remembered for, with General Patton walking onto a stage with a huge American flag behind him, delivering a quotable speech to the (hidden) soldiers in the audience. At this early point, it’s already clear Patton is passionate about making a difference in World War II, and wants to empower others to do their best. We are made to feel like we are the soldiers he is addressing, which adds to the power of the scene.

George C Scott gives an Oscar worthy performance as General George S. Patton Jr, he spreads fear wherever he goes, among his group of soldiers, and as a tactician in the battle with the Germans. The film follows Patton during his North African and European campaigns from 1943-1945, celebrating the army as a war machine, yet justifying controversial independent thinking. We witness realistic battle scenes in Tunisia and Sicily. Apparently the film is fairly accurate as to what really happened.

General Patton perceives himself as a poet, war historian, and reincarnated soldier and is man essentially born in the wrong century. Patton says he’s nothing and “in the dog house“ if he’s not part of the war effort. He lives for the excitement of war. Unfortunately he also has a big mouth and has an old-fashioned tendency to strike out at shell shocked soldiers who he considers cowards, which gets Patton into trouble with his superiors. Yet you could also look at his instilling discipline as motivating the soldiers to rise above their condition. At times, Patton cares more about personal glory than the fate of his soldiers, which causes friction. In a memorable supporting role, Karl Malden plays Patton’s second-hand man, he is both a friend and an advisor. The story is not only told from the allied side, the Germans are also attempting to get one step ahead and figure out Patton’s strategy, so part of the film is subtitled.

I will say the film is a little overlong and while George C Scott does his best with the material he’s given, the screenplay is slightly heavy-handed in some places, spelling out Patton’s strengths and weaknesses. Even so, I like that the filmmakers don’t simply praise Patton as a war hero, which a lesser war film might have done.
Questions what is right and wrong for those in high ranks during a war. Should you push your men to the extreme in order to gain an advantage over the enemy, or is the well-being and survival of the soldiers most important? Many would agree with the latter, yet if it’s the difference between winning or losing a war, it’s a tough decision. In some ways, the battles themselves are secondary to the character study of Patton.

Also worth noting is the award-winning screenplay co-written by an up-and-coming Francis Ford Coppola, as well as Jerry Goldsmith’s impressive war appropriate score. The Main Theme gives you a taste of the soundtrack.

In 1986, George C Scott reprised his role in a made-for-TV sequel, The Last Days of Patton. The movie was based on Patton's final weeks after being mortally injured in a car accident, with flashbacks of Patton's life.


Agree or disagree? Have you seen Patton (1970)? As always, comments are welcome