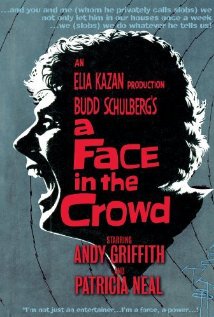 This will just be a quick review. Directed by Elia Kazan, the story is about fame, power and the american dream, and in many ways was ahead of its time, foreshadowing the celebrity craze which we still see today. Andy Griffith is unforgettable in the lead role as charismatic, guitar-playing Larry 'Lonesome' Rhodes, who is discovered, becomes a radio sensation, and this changes his life. You should see the story unfold for yourself, I don't want to give too much away.

The story raises issues about the nature of fortune and fame, temptations, manipulation, jealousy and pitfalls. A film that comments on our society, and is still highly relevant.

I loved the performances, and the applause in the final scene felt iconic. That said, A Face in The Crowd does seem to drag and felt needlessly overlong. The film launched Griffith into stardom, but earned mixed reviews upon its original release. Later decades have seen reappraisals of the movie.

Agree or disagree? Have you watched A Face in The Crowd (1957), and what did you think? Which is your favorite film directed by Elia Kazan?
Posted by Chris at Wednesday, June 24, 2015