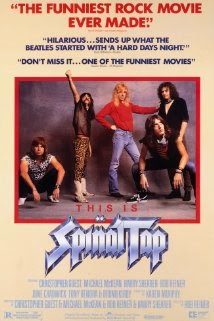 A high energy ”rockumentary”. Hailed as "one of England's loudest bands”, legendary British rock band, Spinal Tap, is followed by a documentary film-maker during their attempt at an American comeback tour.
If you didn’t know this is a fictional mockumentary you could be fooled into thinking it was an actual band. The band members behave in a natural way and the dialogue and songs are so realistic, that it’s authentic, but with enough comedy that the spoof works. While I didn’t love the music or think it was as funny as the poster indicates, I did enjoy the ”fake” interviews and backstage antics. Some people took this seriously when it first came out. You could accept Spinal Tap as a documentary about a real, deluded band that just isn’t that good at songwriting.

There are a huge number of quotable moments such as ”goes up to eleven”, ”miniature bread”, “Oh we’ve got a bigger dressing room than the puppets?!” “I’m sure I’d feel much worse if I weren’t under such heavy sedation” , and "It's like, how much more black could this be? And the answer is none. None ... more black."

A groundbreaking film which is worth seeing, but maybe some of the satire about the music industry would only be funny to those familiar with music from the era. But you don’t have to be into rock music to find it entertaining and amusing, as it’s clear that some things never change such as groupies, band arguments, being spoilt, and the desire to be remain popular.
The band members are basically comedians and actors, Christopher Guest would go on to pen the comedy Best in Show (2000). Michael McKean has acted in many films besides Spinal Tap. The third prominent member of the band, Harry Shearer, is probably most famous for his voice-acting on The Simpsons.

So meticulously crafted that there is a legitimate Spinal Tap album and fake band discography. The soundtrack works because it mimics what it poked fun at. My favorite tracks are probably "Rock and Roll Creation" and "Stonehenge", which mock the music and image of mystical, allegedly demonic bands like Black Sabbath. "Big Bottom" and "Sex Farm" are two more highlights that needle the rampant misogyny, sexism, and machismo in the heavy metal subculture.

Thanks for reading! Have you seen This is Spinal Tap (1984)? Agree or disagree? As always, comments are welcome