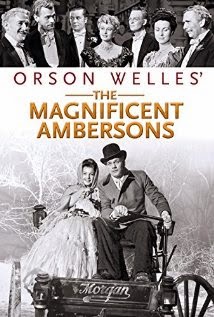 I was expecting more, considering it was written and directed by Orson Welles.  A family saga about unrequited love and a portrayal of an American dynasty in decline. Somewhat bland and forgettable, and only had me involved sporadically. Perhaps a film I need to see again to appreciate.

Based on a 1918 novel by Booth Tarkington which won the 1919 Pulitzer Prize. Welles lost control of the editing of The Magnificent Ambersons to RKO, and the final version released to audiences differed significantly from his rough cut of the film. More than an hour of footage was cut by the studio, which also shot and substituted a happier ending. Although Welles' extensive notes for how he wished the film to be cut have survived, the excised footage was destroyed.

Far from being as masterful as Citizen Kane (1941) or Touch of Evil (1958), The Magnificent Ambersons (1942) does benefit from strong dialogue, and is worth a look as a curiosity. But not as gripping as it should have been. It’s unfortunate we cannot see the director’s intended vision, which may well have been a masterpiece. Considered one of the worst instances of studio interference in cinema history.

There are certain things about the film I did like, such as the scene on the street when Eugene Morgan tells Isabel Amberson he's leaving, and she doesn't show any signs that she wants him to stay. That was one of the few sequences that had an emotional impact on me. The "endless" staircase was interesting both as a technical achievement as well as an allegory.


Thanks for reading! Agree or disagree? Have you seen The Magnificent Ambersons? As always, comments are welcome
Posted by Chris at Friday, March 27, 2015