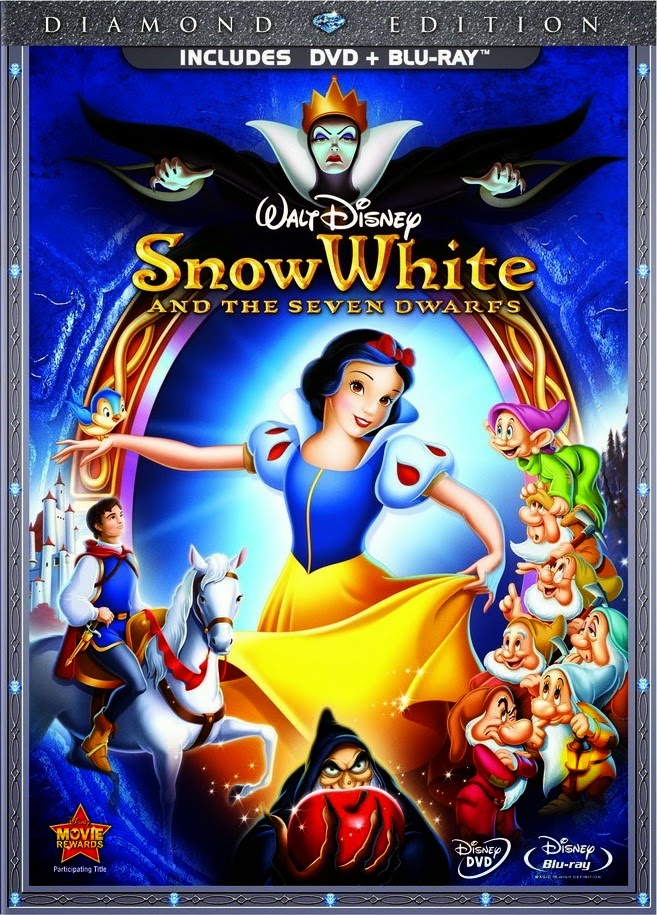 My contribution to Ryan McNeil's 2015 blindspot series blogathon, where I watch a film each month that I have never seen before.


A family fantasy film based on the Brothers Grimm fairy tale. At the time of its release, Disney didn't make feature length animated films, so this was a first and a remarkable technical feat. Beautifully animated considering it was made in 1937. The castle and forest are believable, the characters have facial expressions and shadows, and I was able to care about the characters who are likable and memorable.

Heigh-Ho, Whistle While You Work, & The Silly Song are stand-outs from a wonderful soundtrack. Someday My Prince Will Come is considered a classic too, but isn't a favorite of mine. The wishing well song (from the opening scenes) is also quite original how the echo from the well becomes the backing vocal.

The film isn't perfect. The obviousness of the diamonds in the mine is pretty laughable, but you go along with it because it’s for kids. Unfortunately the prince character is never developed as a fully fleshed-out character, which is a minor weakness. He should have had more screen time.

I had a smile on my face for most of the movie, and would place it on my top ten favorite animated films list. Even if you don’t normally like Disney or musicals, you should do yourself a favor and watch this. Definitely a film I could rewatch, which still holds a real charm today. I love that the dwarfs all have a certain quirk and they are just very entertaining characters to follow. I had a really good time and I felt I was in the cabin as part of the group. 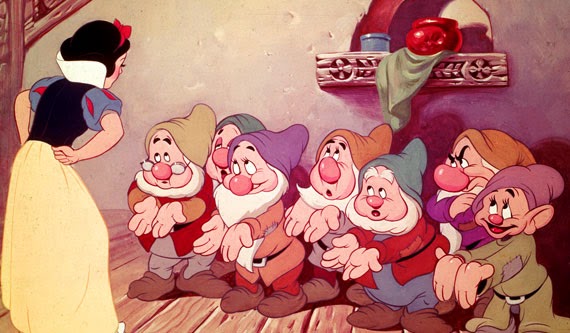 Contains spoilers:
The film has a warmth to it that the animals of the forest (and later the dwarfs) look after Snow White when she has no place to go. Although you could say the tables are turned and she is looking after the dwarfs, cooking them food, cleaning the house, reminding them to wash! She names them Grumpy, Happy, Sleepy, Bashful, Sneezy, and Dopey. However I was a bit confused if they already called themselves by those names. I would imagine they did because you can see in the background those names are carved into the wood.
Some may find it odd that Snow White as a guest would treat the hosts in a slightly preachy manner (see image above). Yet that aspect of the story worked for me because of her charm and that they are all getting along well as friends. The dwarfs appear to enjoy a female in the house. Perhaps due to her shielded upbringing she simply doesn't know how to behave among regular people.
Steve Honeywell at 1001plus questioned in his review whether Snow White is a passive and submissive character with a pretty face waiting for her prince to rescue her, and I agree with that to a certain degree. Her role at the cabin consists mostly of chores and the work of a dutiful house wife, which again could be interpreted as sexist.
The dwarfs are a happy and welcoming group, and maybe the film's aim is for us to think of them as people not to be dismissed. Dopey reminded me of the Marx Brother Harpo, and I was okay laughing at a mentally slow person. I didn't find it condescending the way Dopey was represented.
The highlight of the film for me is probably during The Silly Song, with Dopey on the shoulders of another dwarf, thereby tall enough to dance with Snow White. Other sequences I like are when the dwarfs are sleeping which is fun to watch, and when they line up for a kiss. Now I have an idea why Walt Disney Pictures have that logo.


Thanks for reading. Agree or disagree? Have you seen Snow White and the Seven Dwarfs (1937)? How do you rank it with the other Disney animated classics? As always, comments are welcome
Posted by Chris at Monday, January 26, 2015