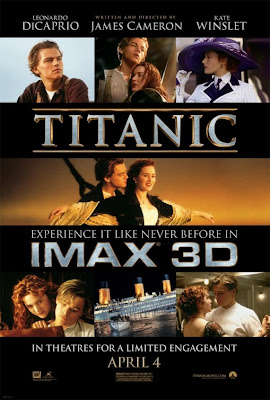 To coincide with the re-release in April 2012, and the 100th anniversary of the sinking of the ship, here’s my review of Titanic.

It’s odd a story as predictable as the voyage of Titanic would at the time become the most commercially successful film ever. Director James Cameron’s film also had the biggest budget recorded at $200 million dollars in 1997. 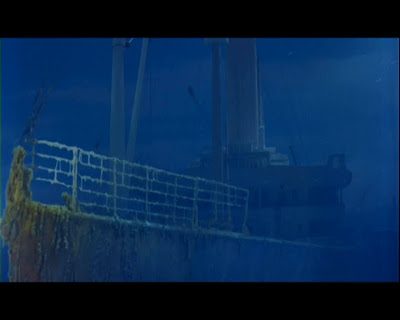 Cameron has said on The Actors Studio, that he made Titanic, because he wanted to dive to the ship wreck, not because he particularly wanted to make the movie. There were many problems during the making of the film, injuries, illness, cold sea waters.

In the pitch to 20th Century Fox, Cameron said: "Romeo and Juliet on the Titanic" 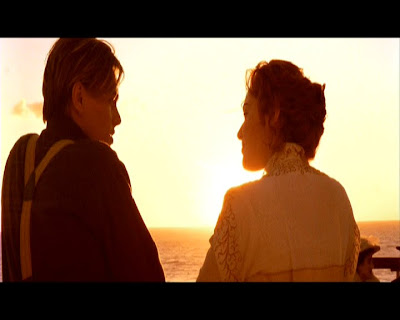 For me, the encounter between Jack, a free-spirited artist (Leonardo DiCaprio), and Rose a woman to be married (Kate Winslet) was just as watchable as the effects. Without the chemistry, I doubt the film would have been as captivating for audiences.

I don’t think I’ve ever been so impressed by special effects as when I watched Titanic in the cinema in the 90s, even today I don’t know how they managed to create the illusion of the Titanic sailing. The actual sinking didn’t impress me as much as panning shots of the length of the ship in the ocean, which may surprise some readers of my review.
Unsurprisingly, the film captured 11 Oscars. Cameron says on the dvd, that if you don’t appreciate the beauty of the ship, then you couldn’t appreciate the sinking. You have to appreciate it in the subjective terms that people viewed the Titanic in 1912, before they knew it was going to sink. What a pity that such an extraordinary vessel would meet it’s fate. 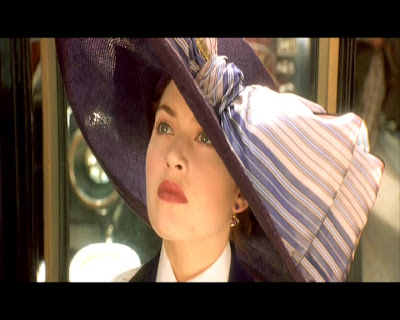 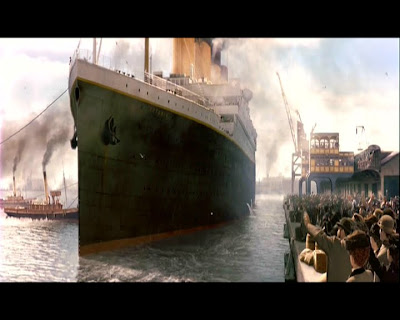 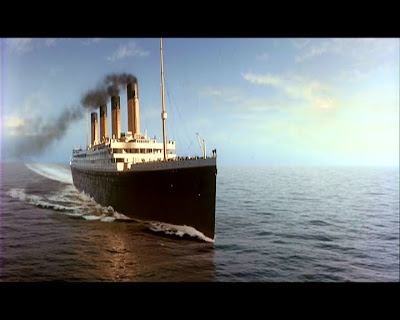 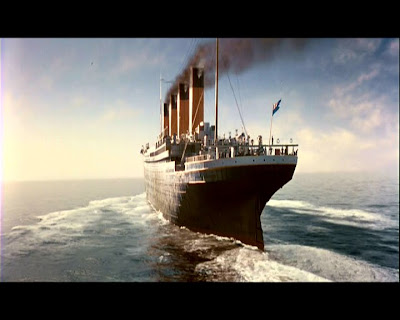 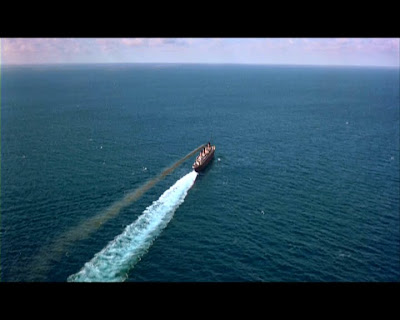 I love how Jack and Rose get to know each other, how we see the whole story through their eyes, so romantic and memorable, I wish I fell in love in the way they did! If I was to be a little cynical and unsentimental, it's conceivable that Jack is a bit of a playboy and finds it easy to charm girls he encounters. The romantic in me leans towards the opinion there are certain people you meet in life that bring out the best in you, who you would gladly go to hell and back to be close to.

I’ve read that Cameron was worried that it would neither be a romance nor a disaster film, he feels that he has straddled both genres, and that is probably the basis of its appeal.

Cameron sums it up:

"I would say it’s a story about love and death. These things happen to everybody."

Titanic (1997) has an old fashioned feel, I believed the maiden voyage took place aboard the Titanic in 1912 due to the sets and costumes. The magnificent ship is brought back to life that we never got to see.

The story of the Titanic still fascinates today, partly because all kinds of human behaviour could be observed during those fatal hours, bravery, cowardice, sacrifice, and human weakness. You almost forget sometimes that it really happened, the tale of the Titanic has a kind of storybook quality with lessons to be learned. 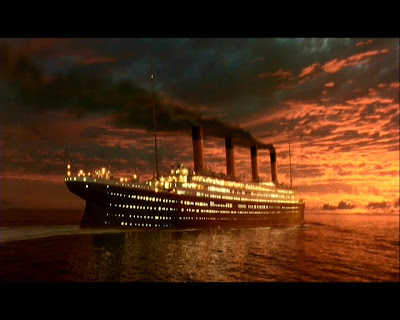 For whatever reason, Titanic is a tale that has captured the imagination of the world more so than other disasters. Titanic was a dream ship that turned into a nightmare. It was a symbol of an optimistic era that believed so strongly and blindly in technology that they famously called the ship unsinkable. Like Herman Melville’s Moby Dick (1851), it has that man versus nature theme going on, where man has become too arrogant and naive, and the grand order of things is putting us in our place again, as if nature is proclaiming, remember you are not gods and only humans.

Much has been written how there were not enough lifeboats for the 3rd class passengers, and theories of why the ship sank, and this was a lesson to future generations. The film is also openly critical of how true love is not based on class or money, but real emotions and attraction. 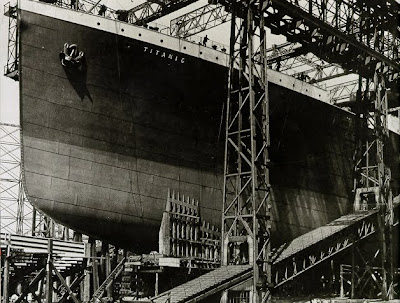 The makers of the actual Titanic, or so I’ve read, were competing with other ship building companies to create the biggest and most luxurious vessel. The shipping industry was flourishing and people felt safe onboard the ocean. During the construction, Titanic was nick named the floating castle, and was the most expensive ship of the era costing $7,5 million, a huge amount in the early 1900s. The delusion of grandeur amounted to more than just size and expense, also in terms of speed, wanting to break the record for a cross over the Atlantic Ocean, despite warnings of icebergs, they didn’t slow down. It's believed due to the weather conditions, icebergs had moved further south than usual. The Titanic disaster was kind of a warning about future technological and man-made disasters in the 20th century, such as the atomic bomb.

A lot has been said about the band onboard, who kept playing music right to the end, several interpretations I’ve come across talk about they continued in order to keep people’s spirits up. Or to show the ship it’s final respect. Or perhaps because it was their job, and they felt an obligation, if one member kept playing, then perhaps the others felt obliged to do the same.

Last year I watched the Bette Davis film Now Voyager, and judging from some of the dialogue, James Cameron was inspired by that 1942 film. 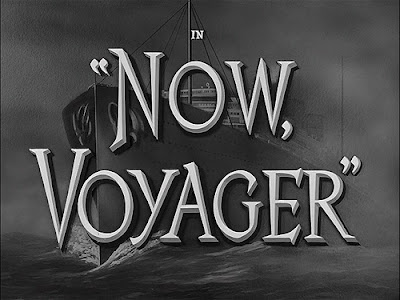 In the Charlie Rose roundtable discussion from 1996, a historian, a playwright, and others talk about the durability of the story. How we are all afraid of dying, and that there is someone among the classes on Titanic that we can all identify with. About timeless emotions of bravery and cowardness.

If you are expecting a documentary that follows historical events, then you will be disappointed by Titanic, Cameron has taken liberty with fictional characters and fictional dialogue. The only thing I might point my finger at is the length of the film, didn’t bother me, but 3 hours is a long running time to sit still. When I saw it in the theatre, there was an interval.

Cameron admits he was sensitive to the need of making Titanic historically accurate. He doesn’t like it when Hollywood takes liberties, although he admits that First Officer Murdoch’s behaviour is not completely accurate. The Murdoch family apparently complained that it’s a fiction and a slur on his memory. 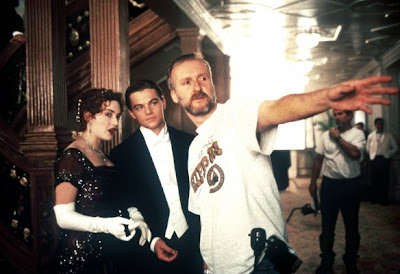 “The films that I loved as a kid were the big films, Spartacus, the Lean films, 2001: A Space Odyssey. The films that put something up there that you could not experience in your life. (...) We fall in love with Jack and Rose, as they fall in love with each other up on the screen. And then there’s a certain point when we realize we are on the ship with them as an audience experientially. (...) To use one of my favorite films as a teenager David Lean’s film Doctor Zhivago, it’s not really about the Russian revolution, it’s about these people in this event that’s greater than them, and I think my film Titanic is the same thing. (...)
You borrow energy from the chosen setting, and in some way I think that energy is returned as well, because by being subjectively involved through this love story, I think you have a more emotional appreciation of the event itself. (...) My model for the character of Rose was an artist in California, who is 103 years old. I wanted to meet and interview someone while I was in the writing stage, who was that age, and had a very exciting and passionate life, and I wanted to see what her memories were like, how vivid they were. Because this is really a movie about memory, what you take away from an event, and how you go on.”

You get an experience you might not otherwise have due to the level of ambition of the filmmaking. Not in the IMDB top 250, which I think is surprising.

And finally, who could forget the haunting music score? Granted, Celine Dion's song "My Heart Will Go On" is cheesy and has a lot of haters, but James Horner's score is what really worked for me and created a lot of the atmosphere.

Have you been to see it in 3D? Any thoughts on Titanic? I think this is the definitive film on the Titanic, hard to imagine anyone ever topping this?

Charlie Rose 1996, a panel discuss the sinking of the RMS Titanic