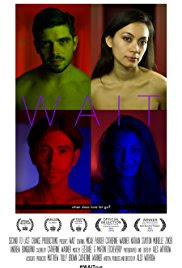 Tough to review this feature debut, because I know the director. I'll give it a shot. Also, I find it difficult to review a micro budget film fairly, because you can’t really compare it to most big budget studio productions. Has to be measured up against similar smaller, independent films, and I just don’t have many recent examples aside from Edward Burns, who wrote and directed the underseen Newlyweds (2011) for just $9.000.
I liked the montages, music, colors, editing and writing in Wait. The opening 30 minutes essentially introduces the characters. The dialogue with the two couples at the restaurant had energy, and is entertaining to watch despite not being vital to the subsequent conflicts. The scene at the coffee shop between Claire, Christian, and a friend was a bit too on the nose in its visual delivery. I question the amount of screen time Micah Parker is given, a good actor, but his scenes alone are a bit self-indulgent. Too often we see him staring into mirrors or clenching his jaw. To me, Parker felt like a supporting character who had been elevated to lead actor, but who was not the most fascinating person to follow in the film. Christian is not a dull character, but Dylan, Natalie, Claire, David and Colin interested me more. 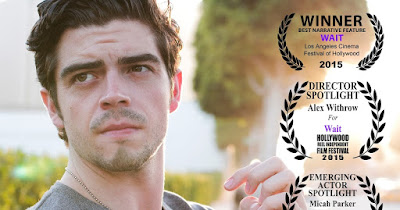 The last 45 min of the 72 min film I felt were a lot stronger and more emotionally involving. You begin to figure out what is at stake. The city lights representing the passage of time at 25.45 was a beautiful moment.David’s reaction (from the 31 min mark) was memorable and when the film really got me hooked.  (Spoilers start) The cut with David facing the camera and looking despondent was powerful, and so is the car sequence. I loved how the score blended into the beeping hospital equipment at 44.30. The best acted and best written scene is probably the discussion between Natalie and Dylan, about whether he should go to the hospital or not. A tricky situation, she is too controlling, and he is maybe too caring about a former lover who treated him badly. It's not easy to say who is right or wrong. In an ideal world, if you love someone you should allow them to be themselves and make their own choices.

Interesting to rewatch the early scenes to see if there is tension between Dylan and Natalie, there isn’t much eye contact between them at the restaurant. The two seem at ease at this point, he’s mellow and quiet, while she is animated and a little flirtatious towards Colin. The difference between them is indicated in the poster. In the club and in bed they appear in love, and when you rewatch Dylan reading Claire’s interview online you put the pieces together. I also found it interesting that Dylan picked a girlfriend in Natalie whose face resembled his previous lover Claire. It was like Dylan picked a new girlfriend who reminded him of Claire. I don't know if this was a deliberate casting decision. (Spoilers end)

According to imdb, the first draft of the script was written in one continuous 36 hour-long session. Writer Alex Withrow edited and fined tuned the script for 10 months, until production began.

Is the interview in which Claire (Catherine Warner) talks about receiving a different script for Bliss autobiographical? In regards to the making of Earrings and Wait in which she starred, I wondered if this really happened!

To sum up, I enjoyed Wait, which won three film festival awards. A promising debut feature and I look forward to what Alex Withrow puts out in the future.

You can rent or buy Wait, from anywhere in the world, via Vimeo OnDemand. If you are in the US, it's also available to watch on Amazon and iTunes. You can read Alex Withrow's blog at And So It Begins