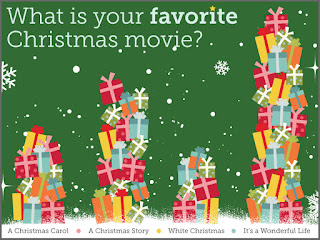 I'm probably jumping the gun, as I haven't watched every so-called Christmas classic.
Below are a few I enjoy, including three short films:

It’s a Wonderful Life (1946) (Frank Capra)
Probably one of the most uplifting and inspiring films ever made. A feel-good drama with fantasy elements. Arguably James Stewart's finest performance, he has an effortless charm. Stewart plays George Bailey, a thin, skinny, well-meaning and selfless character, who has much responsibility. He grows up in Bedford Falls in Connecticut and dreams about leaving and exploring the world. At the same time, he feels duty towards the community. My favourite scene is between Mary and George, when they talk about the future and he promises to pull the moon down for her. Like The Shipping News (2001), a film about community and what that entails, pros and cons.


Santa Claus - The Movie (1985) (Jeannot Szwarc)
The Christmas movie I have rewatched the most. They seemed to show Santa Claus - The Movie on TV every Christmas in the UK when I grew up. Probably my first movie memory, I was not very old when I first saw it, maybe 5, so obviously very nostalgic. Heck, I even rented the video once as a child when it wasn't even Christmas! The effects still hold up well, especially the reindeer sleigh-rides. They had a budget of 50 million dollars, which in 1985 was huge. The money is up on the screen and the toy workshops look amazing. The actors I thought were perfectly cast, the short actor Dudley Moore as the small elf Patch, the fatherly David Huddleston as Santa Claus, and John Lithgow as the sinister toy manufacturer. The story is partly about the origins of Santa Claus and might even get you interested to find out more about the history of the real Saint Nicholas. Probably will appeal more to kids. A film that can get you in the mood to celebrate Christmas.


A Christmas Story (1983) (Bob Clark)
The quintessential American Christmas movie. From the perspective of a young boy, we've all been kids who wanted something desperately for Christmas. Very quotable and rewatchable. With relatable childhood moments at school and with the family at home.

Black Christmas (1974)  (Bob Clark)
Odd how Bob Clark made the beloved family-friendly A Christmas Story in 1983, yet even earlier made a horror film with Christmas in the title.
Black Christmas is one of the earliest and most influential slashers. A murder mystery in which a community receive obscene phone calls, those calls still hold up as very creepy.


Gremlins (1984) (Joe Dante)
Part comedy, part horror. Not for kids, I remember I saw it fairly young, before the 15 rating on the video box said I should. The cute little creatures are not all cuddly!! Amazing to me how many classic 80s movies Corey Feldman is in, he reminds me of childhood. Feels very 80s, they don’t make them like this anymore. A definite nostalgic movie. Joe Dante was at the top of his game in the 80s.

I guess you can watch this to celebrate Halloween or Christmas. Atmospheric and timeless, a masterful piece of stop motion animation. I love the opening sequence. There are countless details which add to the charm and rewatchability, such as when the father opens his head and scratches his brain, the walking bath tub, the dog ghost, or the girl sewing her body parts back on.
I didn’t need to have Christmas explained to me. Although I admit it’s healthy to look at traditions with fresh eyes like a child does, so as to (re)discover what makes things magical in the first place. Hijacking Christmas is a unique idea and we can all relate to Jack’s feeling of something missing in our lives and tired of the old routine. Part of me feels like Burton as a kid would have preferred the ghoulish Christmas presents.
I admire the film more than I love it, but there’s enough to enjoy here in terms of visuals, music and quirky characters. The effects hold up well and so do the songs. Memorable tunes, especially ”This is Halloween” from the opening, and “What's This?” when Jack Skellington encounters Christmastown.

Bad Santa (2003) (Terry Zwigoff)
A Christmas comedy with offensive swearing, drinking, lustful behaviour, and not least showing (deliberate) disrespect to Jesus and the lord. Guaranteed to divide audiences, I hadn’t seen anything like it before. Why the love interest and grandmother can’t see Santa is a jerk is implausible, but the story has its moments. Especially memorable are the scenes when Bernie Mac repeats ”half”, the staring guy at the bar, the boxing, and the jumper cables. The story felt sort of like a reworking of Home Alone, in which the kid befriends a crook. I'm usually not a fan of vulgar comedy, but the story was better than average.

A Charlie Brown Christmas (1965)
Surprisingly melancholic, but very very rewatchable, whether you are child or grown-up.


How the Grinch Stole Christmas (1966)
An iconic story. You can understand how the grinch could be fed up with seeing xmas decorations and hearing all the music and caroling.


The Snowman (1982)
An Academy Award Nominee. I mainly remember the short for the flying scene featuring the song Walking In The Air


Thanks to this site for use of the image