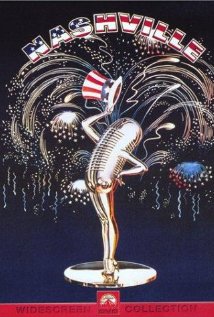 When you think that my blog is both music and films, then it was only a matter of time before I reviewed Nashville (1975). Robert Altman’s take on the country music capital of the world and considered one of the director’s best. A very American movie, we follow a group of singers hopeful of making a name for themselves. There are many characters, yet Altman manages to juggle the elements into an entertaining whole. Ensemble casts ultimately became his identifiable trademark as a filmmaker and this film is a great example of his craft.
Particularly memorable is the young waitress Sueleen (Gwen Welles), who appears at the all-male Walker fundraiser, but is booed off the stage when she sings poorly. Her refusal to recognize her lack of singing talent and the ulterior motives of those she encounters gets her in trouble.
The other sequence that stood out for me is the ending, which surprises with its violence and career making platform for aspiring singer-songwriter Winifred (Barbara Harris). Music at the right time and place can have a profound impact.
The movie is not perfect, the dialogue is often difficult to decipher so watching with subtitles was the only way I could understand what was said a lot of the time.
Perhaps if I loved the soundtrack and country music, I would be a bigger fan. I like it, but it isn’t among my top 3 Altman movies. To be fair, the story isn’t strictly about country, it’s about people, the American dream, and what that entails.
There’s also a fierce political campaign going on that is a character in itself and, like the country music, holds the film together. The politicians and reporters are aspiring to make it big as well. The film is dated in some respects, yet the aspirational aspects are still fresh.
A long film, so watching in one sitting can feel exhausting, so I would recommend not starting if you are feeling sleepy.
The performances are generally good by most of the cast, especially considering the actors are not seasoned musicians. I’m not saying the songs are classics, but they are performed competently at least. A couple of nice songs, but I wouldn't listen to the soundtrack as a stand-alone album. 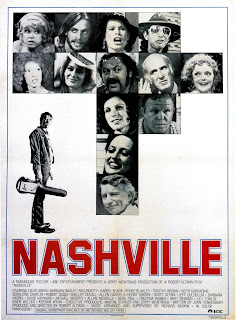 In the interview book Altman on Altman, the director talks about the making and how he went about it. Surprisingly, Altman had never been to Nashville, so he asked a screenwriter friend to do research. The following are excerpts from the book:

"I said to her. Ok, Joan get on a plane and go to Nashville, and just keep a diary of what happens to you. And from that we’ll write some Nashville movie… She arrived at the airport, got in a hired car, and there was a traffic jam caused by a boat falling off a pick-up truck, so she was stuck on the freeway for three hours. That made a great scene to introduce many of the characters. And everything that was in the eventual script was like that, something that had occurred to her.

Then Jerry Weintraub who was in the music business and was managing singers at the time, came to see me at my office, and said he wanted to get into the movie business, how could he do it? I said, well, here’s a script about Nashville and country-and-western music. Get me the money to make that and you can produce it and you’re in the business. He came back in a day or two and he said, I got Marty Starger at ABC interested. They came back over to my house and I played him two of the songs that Keith Carradine had done, I’m Easy and It Don’t Worry Me, and they said, OK

How would you describe the subject of the film?
It was about the incredible ambition of those guys getting off the bus with a guitar every day, and like in Hollywood, trying to make it. Nashville was where you went to make it in country-and-western music.

Chaplin’s Opal is the one character who interacts with all the others. Her slip of the tongue that she’s working for the British Broadcasting Company is the clue that she’s a complete fraud, though.
Opal was our tour guide, the connecting tissue. She was based on a lot of people I’ve met at the Cannes Film Festival, who you never know if they’re really who they say they are. I had to have some connection in my head why I was doing all these disparate scenes, so as a reporter with this ruse she was working for the BBC, she was able to go through this world and became the voice who could ask the questions the audience wanted answering. She was wonderful at improvising her scenes.

You got some criticism for letting your actors write and perform their songs.
Richard Baskin was the musical director, and he helped some of those people write their songs. He arranged all the music in the film, and it was all shot live. I thought, why should I go out and buy a lot of songs that were tried and tested? And also, this wasn’t about his songs; most of the songs were not meant to be hits. Actually one of them was a hit, I’m Easy, though Keith wrote that five years before we did the picture.
The country-and-western people in Nashville all said, Oh the music’s terrible, it’s no good, to which I would reply. Well, I don’t think your music is that good either. They felt I should have used their stuff. But I was satirizing them. Their stuff would have been too on the nose.

At the end, everyone just joins in singing It Don’t Worry Me!
Shit happens, and life goes on, I think that’s what happens. We don’t take any kind of lessons from these events. We accept whatever has occurred because it occurred"