WW2 drama. Often listed as among the best war movies, and best Soviet films ever made. A teenage boy (Flyora) becomes part of the resistance to fight the Germans, we see events unfold through his eyes. Horrific that children would be used as child soldiers.
The film utilizes jarring sound effects to emulate the aftermath of a bombing, when the soldier’s ears or hearing might be affected.
The scene with the flies in the house is very unsettling in how it plays out. Mainly because how uncomfortably realistic it is. Another memorable sequence is wading through the mud and it’s quite amazing how brave the young actors are to put themselves through those dangers. The performances make you believe they are struggling to keep their head above water.
The man who was set on fire lying on the ground is also a striking moment, as was the terrifying trench coat-dressed mock Hitler effigy, with a skull covered in mud. Perhaps put together by the partisans so that relatives of the deceased could tear apart this symbol of evil, and vent their anger. Perhaps as a symbolic "scarecrow" warning to the Germans that they are ready to defend their territory. I'm not sure which?
The many close ups and harrowing nature of the story means it’s essentially a horror film. The main character’s fear-petrified expression is unforgettable. His attempting to shield his ears, going so far as to drive his head into the mud, says more than a thousand words. 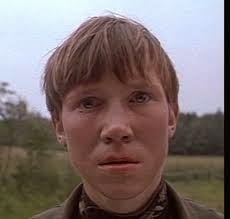 A brutal film. The archival black and white footage of Hitler which is shown backwards for me illustrates the dream (and impossibility) of undoing what has already been done.
A powerful anti-war message. You realize the situations are close to real life, and that the survivors had to live a normal life after the atrocities. There are no winners in situations such as these. You appreciate what the word post-traumatic stress syndrome is about, because these events leave an undeniable mark not just on the characters, but the audience who witnesses them.

If I had to point to a weakness, the ending drags on too long. Director Elem Klimov co-wrote the screenplay with Ales Adamovich, who fought with the Byelorussian partisans as a teenager. According to wikipedia, Klimov was able to start filming in 1984 without having compromised to any censorship at all. The only change became the name of the film itself. As another reviewer wrote, “this movie sets a new standard in making war seem like hell. It's the kind of film that makes you appreciate being alive and having the life you do.”
Approach with caution, a very disturbing watch.
Rating 9/10

Have you seen Come and See (1985)? Feel free to share your thoughts in the comments