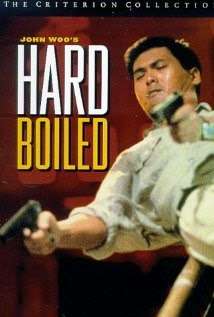 Entertaining Hong Kong action film, considered among director John Woo’s best films. Famous for the choreography with its slow-motion gun battles, sometimes labelled "bullet ballet" or "Gun Fu"(which combines the words gun and kung fu). Essentially highly stylized gunfights. Woo was a pioneer of this style and his film A Better Tomorrow (1986) was the first example of Gun Fu. The film launched the "heroic bloodshed" genre in Hong Kong, and Gun Fu action sequences became a regular feature in many of the subsequent films. The Wild Bunch (1969) directed by Sam Peckinpah was an even earlier example of slow-motion screen violence, only that was a western.
In Hard Boiled (1992), we see a guy jump over a motorbike in slow-mo, and rolling along a hospital bed while shooting.
A film you could watch without subtitles, because the story more often than not is told through visuals.
However it’s not just an actioner, there’s an emotional journey for the main characters.
Hard Boiled was John Woo's last Hong Kong film before his transition to Hollywood. After making films that glamorized gangsters (and receiving criticism for doing so), Woo wanted to make a Dirty Harry styled film to glamorize the police. Woo was inspired by a police officer who was a strong-willed and tough member of the police force, as well as being an avid drummer. This led to Woo having Tequila's (Chow Yun-fat) character be a musician as well as a cop.
The introduction of Tony (Tony Leung) character was memorable, the scene in the red sports car. Tony is shown as living alone and detached from others. Woo stated that this was influenced by Alain Delon's character in the French crime film Le Samouraï.
John Woo actually has a small supporting role as a character named Woo, which surprised me.
The stylized violence is not for everyone, the body count is up there. An accident occurred while filming the hospital sequence. Real glass was used and pieces of it flew toward Tony Leung and got into his eyes. Leung was sent to the hospital and after a week's rest, he returned to the set.
All the characters in Hard Boiled had their voices dubbed by their own actors in order to save money. Woo stated this was convenient as he did not have to worry about setting up boom mics and other sound elements.
As another reviewers wrote, I dread to think how many people were hospitalised during the making of the film.
At the 12th Hong Kong Film Awards, David Wu and John Woo won the award for "Best Film Editing". Tony Leung was nominated for "Best Supporting Male Actor", but lost out.
Favorite quote: It’s what you’ve got, and not how you made it, alright?

Agree or disagree? Have you seen Hard Boiled or other John Woo films? Are you a fan of his style?