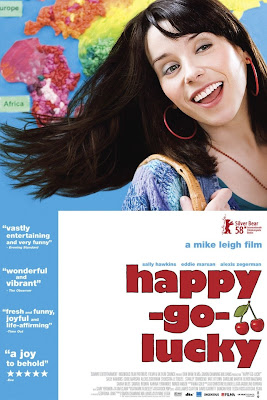 Colourful and thoughtful feel good film about trying to see the positive in everyone and everything and tackle life always with a smile. It made my top 10 films watched in 2010 list. A film written and directed by Mike Leigh. Set in contemporary London, about Poppy, a 30-year-old primary school teacher who is out-going, talkative, irrepressible, funny and with uncontrollable energy. A free spirit whose optimism tends to exasperate those around her, and who speaks before she thinks. The film is lifted by Sally Hawkins' award winning and breakthrough performance. According to the director, Happy-go-lucky is a film about openness and generosity of spirit.

Why is Poppy so optimistic, has she always behaved in this way? Would a sequel about how she was as a 20-year-old cast light on her personality? Could it be she is covering up some bad memories? I'm not sure if Poppy is so happy 100% all of the time on the inside, being happy on the outside I think just makes her feel good about herself and towards others. Maybe she wants to avoid hurting people. I think Poppy is confident and believes in herself, she appears to like being who she is, and doesn't let others make her angry. The title describes her attitude in life, according to freedictionary, a happy-go-lucky person is happy all of the time and doesn't worry about anything. 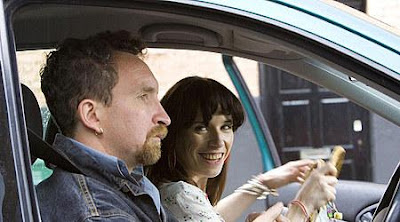 My favourite scenes are the driving lessons with Poppy and Scott (the driving instructor). The two in the car are so different that it's funny to me. Perhaps his reaction to Poppy is saying a lot more about him than about her. It's a lot easier for the driving instructor to change others than himself. Scott is the antithesis of the joyful and open Poppy. She can’t help teasing his obnoxious behaviour, the more she teases, the more he gets irritated. Poppy tries to keep herself from being affected by any negative feelings. She wants to get through to him. Scott is afraid of change.

The use of bright colours emphasizes Poppy’s positive attitude. Sally Hawkins talks about her character on the dvd, and explains “she doesn’t shut up, and thinks she is hilarious, but she doesn’t really care if she is funny or not, she is so un-self-conscious. As much as she doesn’t judge other people, she doesn’t judge herself. She allows herself to be exactly what she is, she sees the humour in things, even in the darkest situations, perhaps when others can’t. She has a huge warmth and compassion for others and is naughty, and has a twinkle in her eye” 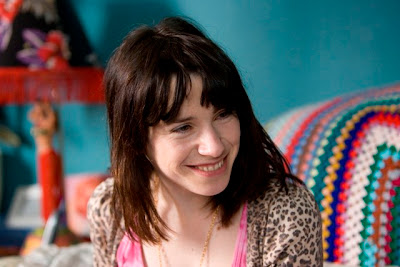 The question is, does her extremely positive attitude irritate us the viewers, and the other characters in the story? Yes and no. Poppy doesn’t appear to want to compromise and tone down her behaviour to make people like her more. She is just herself. Doesn't let life or other people get her down. A role model to others, a happy person, Isn't that what we want for ourselves? Making other people smile is a good thing, so it’s tough to criticize. But is it excessive at times to force her cheeriness onto others and fault them for not seeing life the same way? This is what some people might find annoying about Poppy. The scene with the homeless man I think is an attempt to show Poppy curious about something different to her own life. Maybe she feels she can help the man in some way. 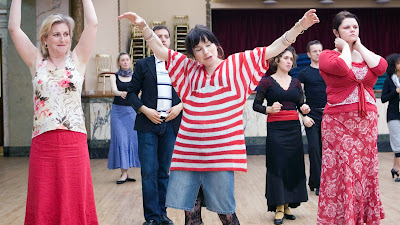 An interesting observation I read was that the film questions whether someone like Poppy finds happiness, or simply wills herself into being upbeat? You definitely have to be strong-willed to disregard your own mood, and just be an ever-smiling optimist, no matter how you are feeling inside. Some people are able to do that, others are not. Its kind of self-perpetuating behaviour, in that if you constantly are happy, then you might conceivably begin to believe you really are happy, I guess. It’s a proactive attitude, having the reserves of energy to give smiles can make you feel good about yourself and give you a good reputation among others. As Madonna once said in an interview I saw, if you see yourself as a winner, then you will be a winner. And you could flip that quote around, if you see yourself as a loser, then you will be a loser.

Another interpretation I read is that Poppy is a child at heart, which is why she has a desire to work with children and therefore is dependent on her older flatmate and the fact she prefers to use a nickname as opposed to her real name (Pauline).

A cheerful and lively movie that makes you believe in the goodness of mankind, if you didn’t already.

The tagline is that it's a movie that will put a smile on your face, and it certainly did in my case. Hey, that rhymes ( :

For me, a weakness is that Poppy doesn't really grow in the story. My rating is 8/10.

The interpretations in my review might not please everyone, but the film sure is a conversation-starter!


Readers, any thoughts on Happy-Go-Lucky?