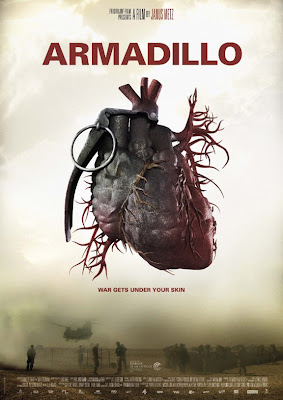 Cannes-winning documentary, on war in Afghanistan, seen through the eyes of Danish troops during a 6 month period. Shows many elements of war the soldiers must endure, combat, the dull moments waiting, anxiety, impulsive emotional outbursts, injury, killing, bravery, what might happen to people who fight in war. We get to see what they go through on a day-to-day basis.

What a brave camera crew! A very adrenalin-filled experience, which is not afraid to ask difficult questions. About motivations, is it taboo to say you want to experience adventure as a soldier? Also about families at home worried sick. About the fine line between fiction and reality, you see soldiers playing war games on their playstation one moment, and the next doing it for real in the desert.

Encounters with the Afghan people are nearly always intense, and the film portrays this intensity very well as experienced by soldiers on various missions. The Danes are unwanted, and this means they are on edge all the time when on patrol. We the audience feel like we are out there with them, such is the realism. As blogging friend Colin at picknmix says in his review, it’s a war that probably can’t be won, there are no winners or looses.

The Taliban sabotage the peace mission by saying to the Afghan people, that the Danish soldiers have come to kill the Afghans and their cows. This makes it even trickier to move forward. The civilian population haven't even made a choice whether they want the foreign soldiers in their country, and are afraid of getting bombed, having their animals killed, and their crops stepped on.

When one of the Danish soldiers gets injured, there is a vengeful attitude towards the Taliban, which probably also works the other way around, when a Taliban gets injured or killed, the Taliban also want revenge. You have to stick to combat rules, but obviously people build up hatred towards the enemy, who are trying to kill you. So it’s a vicious circle. 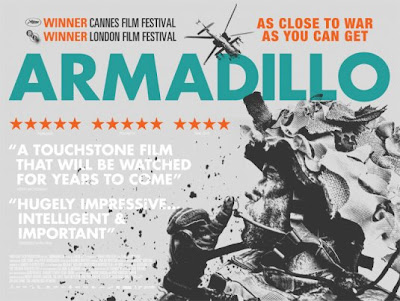 Enjoying, bragging about, and being praised by your supervisor for killing is disturbing, while at the same time being accused at home of liquidating injured Talibans. But at the end of the day, it’s a job, isn’t it? What has shocked public opinion is the suggestion (as one soldier later puts it) that they "liquidated wounded people and piled up the dead to take pictures of ourselves as heroes".

Director Janus Metz says he grew very close to the soldiers while filming, did he get too close to the soldiers? So raises the question about objectivity, if the director cares too much about the individuals to paint a brutally honest portrait of them? The eyes of some of the Talibans were blocked out, in accordance with the rules of the Geneva Convention, where you are not allowed to be able to identify a killed soldier.

Then again, it’s very easy for people to pass judgements from the safety of their armchair, they are not putting their life at risk. You can’t prepare mentally for battles and casualties. According to a soldier, it’s not abnormal to laugh at the destruction, as it’s so meaningless.

The doc started a debate in the Danish press. Denmark has been at war against the Taliban for 9 years together with the United States. A number of Danes have died, many have been wounded. Is it worth it? The government and supporters claim it will lead to peace and democracy. The naysayers point out it has nothing to do with possible terrorist attacks in Denmark, and they don’t think it’s worth risking the lives of Danish soldiers. On the other hand, hard to feel sorry for the soldiers, they have chosen to go to Afghanistan, no one has forced them.

According to author Carsten Jensen, 23 of 39 soldiers died trying to defend the Armadillo camp, which has now been shut down! So you can question whether those casualties served a purpose or not. The terrorist plots in Denmark in the last 10 years have not even been by Afghans, but Pakistanis, so this further brings into question the involvement in Afghanistan. Carsten Jensen believes the doc will change the Dane’s perception of the war. The Armadillo film gave the Danish public a new, more detailed view of what the war in Afghanistan is really like, and people could better make up their minds if they supported the Danish involvement.

According to the director Janus Metz, it's an analytical film, the goal was to show the paradoxes and grey areas of war. For Metz, there was a discrepancy of the soldier’s experience of war, and the polished image the media had a few years ago. The Danish military had been criticized for being too closed, so Metz thought the timing was just right for a doc to shed light on the issue. Metz comments that the notion of the civilized is upheld by violence at the end of the day, and he thinks we should question how we have become increasingly militarized in the post 9/11 environment.

I read a reviewer complain about how the doc is too beautifully shot, doctoring with the visuals to make it feel more like say the movie Platoon, I’m not sure I agree with this assessment, this was not really the agenda of the film anyway. And some claim the footage could have been shot in a lot of countries, not necessarily Afghanistan. Clearly comparisons can be made to Restrepo (2010). In my humble opinion, Armadillo has more to offer.

Armadillo is the best documentary I saw last year, which made me see war in a whole different light! The themes of the struggles of a soldier are universal. Apparently, the filmmakers say it’s unbiased, neither for nor against the war, instead inviting to discussion. What would you have done in such a situation? Not being able to openly show anxiety when on duty might have consequences later on, when the soldiers return home. You can't go to war without getting tarnished.

Readers, any thoughts on Armadillo?

Rottentomatoes
Posted by Chris at Wednesday, May 04, 2011