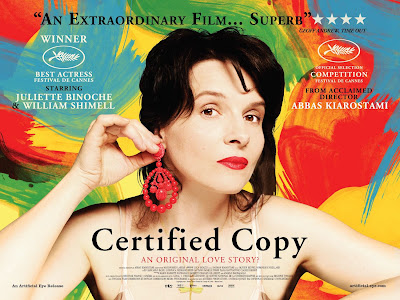 In Tuscany to promote his latest book, a middle-aged British writer meets a French woman who leads him to the village of Lucignano. What makes the film interesting is the dialogue and the behaviour of the two leads.

Juliette Binoche won the Best Actress prize in Cannes for her performance, I happened to think the male lead William Shimell was fairly dull and wooden. The dialogue switches between English, French and Italian. I never did figure out why the couple started speaking in French, when they spoke in English for much of the story?

Certified Copy is an ambitious script worth a look from an intellectual standpoint, but isn’t romantic enough in my mind. Frustrating to watch the man and woman play charades with each other and are not just their natural selves. Perhaps the director is saying when over-40 intellectuals flirt, it’s sometimes a game of impressing the opposite sex, and perhaps the innocence and tenderness is no longer at the forefront. More about companionship than desire. I enjoyed the first hour or so, but the charades in the last 45 minutes were a letdown and those scenes were somewhat cold, I thought. Both characters appear to be attracted to one another, but are sort of hiding their true selves behind a mask of games. We can’t know if some of the charades are true feelings, and some are playfulness. You would think they are enjoying this game of charades, as they continue with it for a while. I just didn’t feel a sustained warmth for either of the two leads throughout, possibly because there was not much weakness being displayed, or they just didn’t want to show much frailty. When you are that age, then you’ve obviously built up a guard to protect yourself from being hurt, but this also means it’s tricky for others to see the real you, which at the end of the day is what we all crave isn’t it?, to be understood and loved just for being ourselves? Perhaps the film is saying some over-40s take longer to open up. 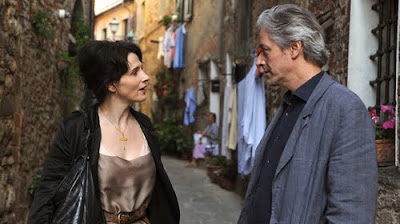 Some of the dialogue was memorable and thought inducing, but at times didn’t seem natural. Here are some quotes I liked:

“the copy has worth in that it leads us to the original and thus certifies it’s value (and not just in art, but in regards to people, the façade is the copy that conceals a person’s original, true self)

her son: “you have decided you want to fall in love with him”

on women and art: “they can be attractive enough, but they can be bad for you”

“We get upset when a child tells us off, but are happy enough when a writer does”

“even the Mona Lisa is a reproduction of a woman” (Leonardo da Vinci conceivably didn’t even ask the model to smile in that playful way, so is the model the one creating the ambiguity in the painting, and Da Vinci getting all the credit?) 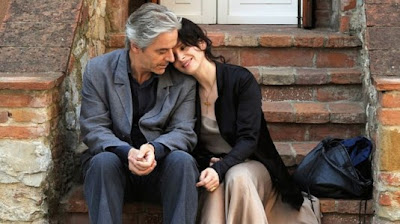 In my opinion Certified Copy could have done with some more humour to lighten up the mood. While I quite enjoyed the monologue at the beginning about art and the conversations the first hour, I only gravitated towards the characters on an emotional level in a few scenes such as the car journey. Won’t go down for me as a cult favourite like Before Sunset, despite the obvious similarities. The relationship is so complex in Certified Copy, that it becomes tough to mirror myself in their feelings. I heard someone call Kiarostami's film a mental work out.

Ebert wrote an interesting review, how the film is about the difference between original art and its copies. Is there, in fact, any difference? Which is the real relationship, and which is the counterfeit? Were they a couple pretending to meet for the first time or a new couple pretending to be married? Perhaps Kiarostami's intention is to demonstrate how the reality is whatever the artist/couple chooses.
Another interpretation I read is that they are not married, nor are they strangers, and that she is his mistress of 15 years and she longs to be his wife, while he is somewhat indifferent to her and probably has a wife. Acting is also a copy, so its like a copy of a copy.

The film certainly has unique qualities, and I’m not sure I understood all of the director’s ideas, and the story would probably reveal more on subsequent viewings. I quite liked the film, just didn’t fall in love with it, although I admit it can be charming to see people gradually falling for each other, just my gut feeling is there is not quite enough chemistry for the film to glue me to the screen. My rating is 7.5/10.

Readers, any thoughts on Certified Copy?

Rottentomatoes
Posted by Chris at Monday, May 23, 2011