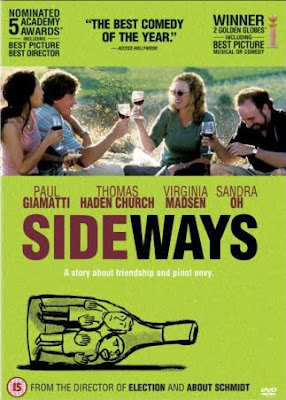 Love this film about friendship, about flawed but likeable characters, and how we encourage the ones we care about. We follow two middle age men presumably in their forties, Miles and Jack, who are on a road trip through California to celebrate Jacks last freedom before he’s to be married.

Sideways is a drama/comedy road movie. The title is a reference to the best way to store wine, on its side. And in some ways Miles is also lying down in life. He has never recovered mentally from the break-up of his marriage two years earlier.

The wine plays a symbolic role in the film, and reflects the mood of the characters. Miles feels like a Pinot, the potential of which is not revealed unless you take your time. Miles must learn to open his inner wine bottle, before its too late, his life lacks that spark, and he devotes his attention to having good taste, maybe to make himself more interesting towards the ladies. My favourite scene I can rewatch endlessly is between Miles and Maya, where they discuss wine after the dinner, here are some screenshots from my dvd: 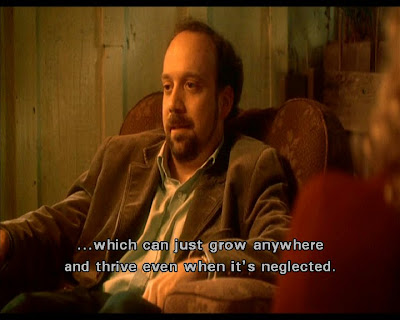 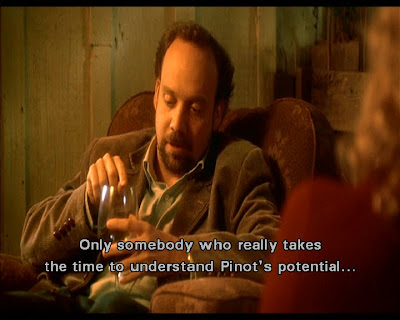 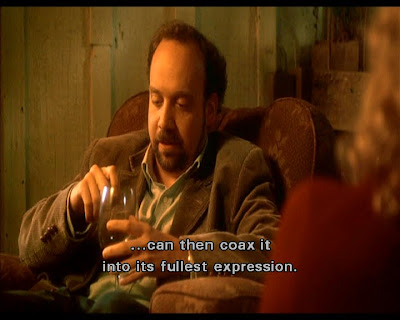 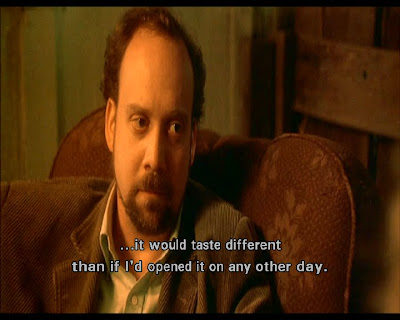 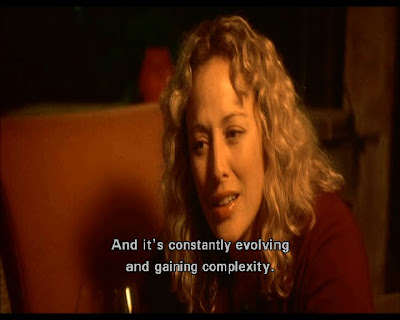 Sideways was nominated for an oscar for best picture, didn't win, but won an academy award for best adapted screenplay based on a novel by Rex Pickett.

Alexander Payne is among my favourite directors, his films are so warm, smart, funny and rewatchable. The flawed characters have a genuine emotional core.

The two men realize that you can’t run away from who you are. It’s a journey of self-discovery. I think we laugh with them and not at them. An exploration of life, longing and second chances. The director makes us care about these two misfits who seem headed towards their own destructions.

Sideways is about the rewards of friendship and the frustrations of middle age. The director is tackling the gloom of modern mediocrity, and exposing weakness in a warm-hearted package. Although I still prefer About Schmidt, I think Sideways succeeds on every level. And I don’t hesitate calling it one of the best films of 2004. 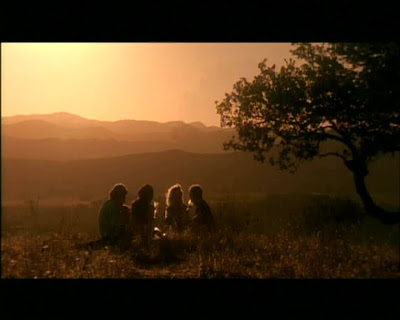 I saw on the DVD that director Alexander Payne was looking to have cinematography like some of the movies from the 70s, which I can see now is similar to sun drenched images in Badlands or Harry and Tonto. Payne is not influenced so much by recent films, but older ones.

I’ve read that the film increased tourism in the Santa Ynez Valley, where parts of the story took place. They also believe it affected sales of wine mentioned in the script.

Readers, any thoughts on Sideways?
Posted by Chris at Thursday, March 31, 2011