Old and new albums of the month: August 2017 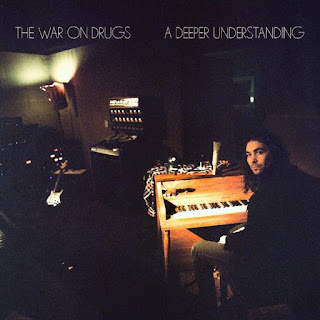 A Deeper Understanding by The War on Drugs (2017)
Album of the year so far, and will take something special to knock it off the top spot. To be honest, not a great leap forward in terms of their sound, similar heartland rock as their previous. But they do it so well. Shouldn't have doubted the band could equal 2014's Lost in the Dream. Nothing to Find is the best of the non-singles. Probably could have ended after Thinking of a Place, but nice to have the rest as bonus material.
8/10

Good Time by Oneohtrix Point Never (soundtrack) (2017)
You know the music buisness has declined when Thief (1981) soundtrack by Tangerine Dream was nominated for worst musical score (really?) at the Golden Raspberry Awards, while Good Time film score by Oneohtrix Point Never (a decent 80s homage to Thief) wins Soundtrack Award at prestigious Cannes Film Festival.
I haven't seen the movie yet. Hospital Escape, Entry to White Castle, and Romance Apocalypse are good, and would work for suspense/atmosphere. Leaving the Park has a nice guitar solo. The Pure and the Damned feat. Iggy Pop is quite haunting but loses its allure on repeat listens.
6/10


The Machine That Made Us by Flotation Toy Warning (2017)
I like their lyrics. I'd rather read the words than listen to the dull/depressing vocal again for 61 minutes. Controlling the Sea has a nice melody. King Of Foxgloves might be a grower.
4/10


Weakness (EP) Margo Price  (2017)
Better-than-average EP containing four new songs. Two excellent country ballads in Weakness & Just Like Love.
An uptempo song with an extended jam (Paper Cowboy).
The only minor track is the closer Good Luck, although I like the piano.
7/10


Songs From the Big Chair by Tears for Fears (1985)
Everybody Wants to Rule the World (with its iconic intro), Shout, and Head over Heels are the three towering pop hits the album is famous for. The Working Hour is nicely produced. Mothers Talk a bit too repetitive, although has an interesting outro. I Believe is a slower, simpler song, a mid album breather. Listen a beautiful closer, however the repetition is a bit unimaginative.
Not an album I'd play often, good for the occasional listen. The vocal is on the verge of cheesy and prevents a higher score.
7/10

Welcome to the Pleasuredome by Frankie Goes to Hollywood (1984)
A big, lush 80s pop sound, coupled with (at the time) controversial themes. The hit single Relax (a warning about the dangers of intercourse) is the most catchy and memorable. Welcome to the Pleasuredome (about debauchery), War ...And Hide (an anti-war anthem),  and the moving love song The Power of Love are the other keepers.
The rest of the album is ok but forgettable. The covers of Born to Run and San Jose (The Way) are odd inclusions. The Ballad of 32 is a Pink Floyd homage with erotic undertones.
If I listen to the album again, I'd stop after War and skip to the penultimate The Power of Love. The last 2/3 of the LP are not at the same level as the opening 25 min. Despite the unevenness, worth checking out if you are an 80s fan.
7/10


Tattoo You by The Rolling Stones (1981)
I've read Tattoo You is their last great album.  A fun, easy listen. The first four tracks, Start Me Up, Hang Fire, Slave, and Little T and A are very, very catchy.
The formula hasn't altered really from their classic sound, but why change if it still rocks? Apparently the album is mostly composed of studio outtakes recorded during the 1970s.
Not their best lyrics, the Stones don't seem to have much to say at this point, except expressing fondness for girlfriends/groupies, which is what keeps it from a higher rating.
7/10


The Nightfly by Donald Fagen (1982)
According to Rate Your Music, Donald Fagen's best solo album. I like the musicianship. The backup vocals and harmonies got on my nerves a bit, though less bothersome on further plays. There are some nice grooves on tracks such as  I.G.Y. , Green Flower Street and New Frontier.
"In my dreams, I can hear the sound of thunder" is an inspired lyric.


Can't Buy a Thrill by Steely Dan (1972)
Three classics with timeless, relatable lyrics (Dirty Work, Do It Again, and Reelin' in the Years)
The other songs are not bad, although less distinctive. Probably takes many plays for it to become a loved album. I like Can't Buy a Thrill enough to keep exploring their discography.
7.5/10


There's a Riot Goin' On by Sly & The Family Stone (1971)
Short on hits (Familiy Affair stands out), rich on funk. You could listen to tons of times. I initially felt this is a good album, but a victim of excessive acclaim. On second listen, I get what is so great about it. The yodeling on Spaced Cowboy is super annoying though. It's pretty obvious Prince was influenced by their music, especially in terms of the vocals.


Hip by Steppeulvene (1967)
The Danish Bob Dylan. Featured in my edition of 1001 Albums You Must Hear Before You Die.
Stand outs include Dunhammeraften, Itsi-Bitsi, and Til Nashet
7/10


The Times They Are A-Changin' by Bob Dylan (1964)
While well-written, the album is lacking in variety. Bob Dylan was among the folk music revival songwriters with social and political messages. Nowadays political albums are commonplace, and when everyone is doing it, it feels less vital. The opening title track is a 10/10.
Best tracks: The Times They Are A-Changin', With God on Our Side, North Country Blues
7/10


Kind of Blue by Miles Davis (1959)
Considered among the greatest jazz albums. No idea what to rate. I've tried listening on three separate occasions. I don't find Kind of Blue as soothing and calm as the Rate Your Music descriptors indicate. The best album experience was while doing the dishes, the worst was driving when the improvisational tunes made me stressed. The third time I just sat in a chair and was bored. Perhaps I'll have to chalk it up as a classic that just isn't for me. Think I prefer music that is more melodic.
?/10

In the upcoming weeks, I'll have posts ready on the discographies of Led Zeppelin and Cream.

What do you think? As always, comments are welcome
Posted by Chris at Thursday, August 31, 2017