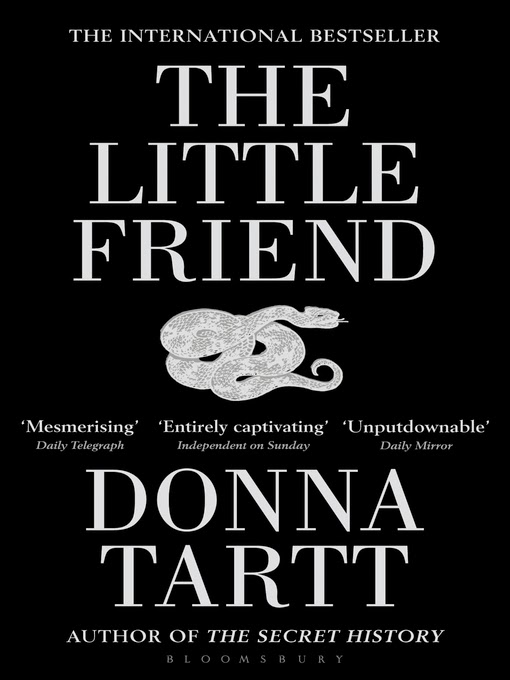 This review is written as a contribution for 2015's A Fistful of Reads blind spot challenge which is hosted by A Fistful of Films.

The second novel by reclusive American author Donna Tartt. Don’t judge The Little Friend by its creepy title, it isn’t about molestation. The novel won the WH Smith Literary Award and was shortlisted for the Orange Prize for Fiction in 2003.

She received both critical and commercial success with her bestselling debut novel The Secret History (1992), which is set on a campus and one of my all-time-favorites. I reviewed it here. In fact Tartt has only published three books in her career, spending a decade writing each novel, and winning the Pulitzer Prize for The Gold Finch (2013), which I have on my reading list.

All three of Tartt’s novels are about secrets. Set in Mississippi in the south, The Little Friend takes place in the 1970s, and tells the story of a family and surrounding neighborhood. Events are seen through the eyes of 12-year-old Harriet. She is friends with Hely, a boy from the neighborhood. They see themselves as detectives and go on adventures in an attempt to solve what really happened to Robin, Harriet's brother, who died hanging from a rope under mysterious circumstances. Hely is attracted to Harriet and would do anything for her.

Tartt does a fine job of introducing the family, and how they are connected to each other. Robin's death sent the girls' mother Charlotte into a depression from which she has never awakened. Charlotte is the daughter of Edie, yet Charlotte receives love from aunt Libby. Robin got along well with Edie before he died. Libby and Edie are like surrogate parents for Harriet, Robin and Allison, although there is also a nanny called Ida. Libby is generous and patient, she never married and put other people’s needs ahead of her own. Edie is difficult to get along with, but loving in her own way.

Harriet is described as a bookish, determined, unattractive girl, who is too direct.  Her sister Allison is a vulnerable dreamer. Allison was in the garden when Robin died, but since she was only four at the time, remembers nothing from that day. Allison is happiest when nobody bothers her.

Charlotte and Dix are Harriet’s parents. Harriet’s absent father has too much energy and like Harriet speaks his mind. He always thinks he’s right even when he’s wrong, unshakeable in his opinions. He has a job in Nashville but nobody enjoyed his holiday visits. Harriet’s mother Charlotte is the polar opposite to him and has no energy, she can barely do her duty as a mother.

There isn't a great deal of story for a book that is approx. 600 pages. The writing style is both the strength and weakness of the book. Tartt creates an atmospheric and authentic depiction of childhood, friendship, and a dysfunctional family, the difficulties and joys of growing up, which is given equal importance as the murder mystery. Beautifully written prose, the novel feels nostalgic, the descriptions are like lived moments from the author’s past. But maybe the book is in need of an editor, many chapters could have been shortened and don't always drive the story forward. The second half of the book where Harriet and Hely observe the dubious behavior of the Ratliff’s is too long-winded.

As with The Secret History, momentarily I stumble upon passages I connect with. Described by The New York Times as a young-adult novel for grown-ups, what I'll take away from the reading experience are primarily the scenes I could identify with from my own childhood: Using carpet patterns like a play area, reluctance at parents giving your toys away, behaving badly and not being allowed to watch TV, wanting the same stuff as your class mates, wearing your parent’s clothes for fun, going to your first funeral, a teacher asking you what you want to be and having no clue so early in life, punished for drinking when under age, missing the sound of someone’s presence in the house when they have gone, and so on.

The most exciting part of the book is the last act, which is essentially an action sequence, and involves drugs and a water tower. The book artwork hints at the role snakes play in the story.

To sum up, not an easy book to get through, it was a grind and took me a long time to finish due to the lack of plot and overly descriptive, long-winded sentences. It is slow and tedious in places, and I felt cheated in regards to the murder mystery, but ultimately a rewarding read which I am happy to have had, especially in how it took me back to childhood. This may not have been exactly what the author intended for me to take away, since I read in an interview she was making commentary on the Deep South. While Tartt's sophomore effort is well-written, and with life-like characters I cared about, the actual narrative for me is not quite strong enough for it to achieve greatness. The author manages to create a believable world I could get lost in, and beautifully renders the inner life of her main character, but at the same time the novel is overlong and self-indulgent. As another reviewer wrote, Donna Tartt “may reveal a determination to succeed on her own terms, however much these prove frustrating to the reader.”Despite these reservations, I look forward to reading more of her work.

Have you read any books by this author? Did you read a book recently that stayed with you? As always, comments are welcome