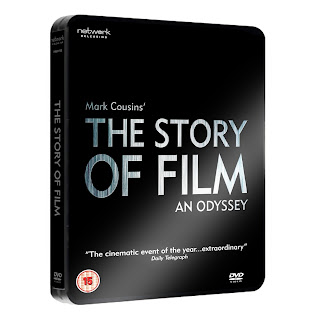 A very impressive 15 hour documentary, which everyone interested in cinema should see. Hugely ambitious, a look at key moments in the innovation of film from its inception in the late 1800s up to the present day.
Encourages you to seek out films that are mentioned during the episodes. You also become aware how film history is influential on the films that followed afterwards. There are those who were put off by the narrators vocal delivery, and that is a fair point, his voice is very distinct and some find it annoying.
As blogger A Fistful of Films wrote, you need to look at films of yesteryear through the eyes in which they were created and the times in which they encompassed, and I think director/narrator Mark Cousins does a good job of that.
However it’s not perfect, Cousins passionately speaks like everyone should accept his statements as the truth, but they are really only subjective opinions of his. He is clearly biased, preferring arthouse and foreign films, over mainstream Hollywood. He does get sidetracked quite a lot, so films from different eras are confusingly talked about out of context, however I didn't mind this approach, because Cousins is brilliant at comparing films in an interesting way.
Mark Cousins is interested in innovation in cinema, and is very good at highlighting key innovations. Yet some of the films are not particularly fascinating except maybe 1-2 scenes. Just because a work of art is groundbreaking in its form or content, doesn’t mean it’s something you actually enjoy. Some of these films may not appeal to anyone except hardcore cinephiles. I feel Cousins fails to discuss this matter, and neglects to point out that while innovation is praiseworthy and an important step forward, it doesn’t necessarily equal a great film. Sometimes it takes a few tries before the innovative technique is turned into a great film. The first attempt is not necessarily the best.
Having said that, the documentary is a treasure trove of great films to explore. Here’s a letterboxd list of all the films mentioned in The Story of Film An Odyssey, and wikipedia provide lists of films for each episode. 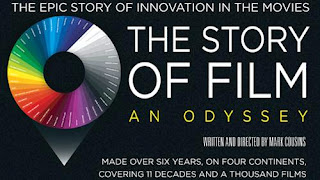 My notes on each of the fifteen episodes:


Episode 2 - The Hollywood Dream
1918-1928: The Triumph of American Film...And the First of its Rebels
About the rise of Hollywood’s studio system, and the pros and cons of that control.
The Thief of Bagdad (1924) starring Douglas Fairbanks is highlighted as a 1920s production that could stand for many of the films of the era.
Buster Keaton, Charlie Chaplin, and Harold Lloyd are the great comedic innovators of the time.
Most interesting to learn was The Kid (1921) recreated Chaplin’s own childhood poverty, and likewise many of his movies pointed towards Chaplin’s empathy for the poor.
Documentaries are also examined, Nanook of the North(1922), The House is Black (1963), Sans Soleil (1983), & The Perfect Human (1967).
Other early directors looked at are Erich von Stroheim (1924’s Greed) and King Vidor (1928’s The Crowd)


Episode 3 - The Golden Age of World Cinema
1918-1932: The Great Rebel Filmmakers Around the World
Continued look at filmmakers of the 1920s. Interestingly I had never heard of director Abel Gance, and La Roue and Napoleon are films I hope to see in future
Cousins definitely has high praise for little known Asian movies, he calls A Page of Madness (1926) and Souls on the Road (1921) the two best Japanese films that exist.
Another new discovery for me is the director Aleksandr Dovzhenko, and his films Earth (1920) and Arsenal (1929).
I don’t share Cousins’ love for Ozu, but you can’t fault his enthusiasm in telling us about the Japanese director.
Cousins concludes the episode by making a strong argument for the Chinese actress Lingyu Ruan to gain wider recognition in film encyclopedias, and claims she was the first actor to do realistic acting, decades before Marlon Brando
Notable oversight by Cousins is FW Murnau’s Nosferatu (1922)


Episode 8 - New Directors, New Form
1965-1969: New Waves - Sweep Around the World.
Andrzej Wajda, Roman Polanski, Milos Forman
Like Polanski, Forman was Jewish, both his parents were killed by the Nazis, and he was a film school graduate. According to Cousins, Forman “saw life as comic, almost absurd”
Firemen were supposed to be portrayed as heroic public servants in the communist world. In Forman’s film Fireman’s Ball, authority are incompetent and immature. Deadpan, documentary-like, making the firemen look clueless and funny.


Episode 9 - American Cinema of the 70's
1967-1979: New American Cinema.
Robert Altman’s McCabe and Mrs Miller is described as an anti-western. Unlike John Ford westerns, there are no heros here, just characters lost in the snow, out-of-their depth, and uncertain about the world.
Paul Schrader’s Light Sleeper (1992) is described as a masterpiece. Drug dealer spiritually empty, and Schrader wanted to show the rescue from this emptiness.
Killer of Sheep
Sam Peckinpah.


Episode 10 - Movies to Change the World
1969-1979: Radical Directors in the 70s - Make State of the Nation Movies.
Wim Wenders, Rainer Werner Fassbinder, Pasolini,
Bertolucci: The Spider’s Stratagem (1970), The Conformist (1970)
Performance (1970)
Documentary: Minamata: The Victims and Their World (1971)
The Holy Mountain (1973): Jodorowsky studied Zen Buddism, the idea that men should dethrone themselves. And Jodorowsky studied Carl Jung, so this scene in a way is a man climbing into the maze of his own mind, where he discovers strange images and archetypes that he shares with all human beings. A journey of self-discovery and self-loss. The thief’s journey of self-discovery mirrored that of 70s cinema itself, its political innovative filmmakers had stripped cinema naked, loaded it with symbolism about self-hood, and turned it into gold. And they used movies to ask, who are we as modern Europeans, Asians, Africans, South Americans.


Episode 11 - The Arrival of Multiplexes and Asian Mainstream
1970s and Onwards: Innovation in Popular Culture - Around the World.
The Indian epic Sholay
Once upon a time in China
The Exorcist
George Lucas and Star Wars
Steven Spielberg and Jaws.


Episode 12 - Fight the Power: Protest in Film
The 1980s: Moviemaking and Protest - Around the World.
Come and See (1985)
Long Goodbyes (1971) Theme is about psychological bondage and the way people can suffocate each other.
Kieslowski’s Short Film about Killing
Yeelen (1987) directed by Souleymane Cissé. According to Mark Cousins, as big as Lawrence of Arabia and as shape shifting as 2001: A Space Odyessy. A magic realistic film, and one of cinema’s most complex.
David Lynch. His “eye of the duck” is the key scene in any of his films that often combines the beauty of life with its terror. As Lynch puts it, when you look at a duck, the eye is always in the right place.
Like Ronald Reagan, Lynch had an almost abstract fear of the outside world. But he didn’t try to push that fear away, he stared at it, through a brilliant frame.
A Zed & Two Noughts (1985) directed by Peter Greenaway.


Episode 13 - New Boundaries: World Cinema in Africa, Asia & Latin America
1990-1998: The Last Days of Celluloid - Before the Coming of Digital.
Starts off talking about Iranian director Abbas Kiarostami, especially his Koker trilogy.
I do find his condescending comments about such films as Terminator 2 and Avatar pretentious and off the mark.(he does praise T2s innovation in E14). Just because they are not his favorites, doesn’t mean they are not as technically important to the evolution of the medium as foreign arthouse films. I understand Cousins wants to highlight overlooked cinema from other countries than US, and that’s fine. But those Taiwanese films he mentions that hardly anyone has seen simply don’t have the same appeal to most audiences as aforementioned blockbusters.
J-horror is next, about The Ring and Audition (1999)
He movies on to Dogme movement from Denmark, followed by French, Belgian directors, Michael Haneke.
I’m beginning to wonder if the documentary should have been titled: “The Story of Foreign Film”
Surprised Kieslowski’s Three Colors Trilogy is not mentioned (though Cousins does show a clip from Blue in E1)


Episode 15 - Cinema Today and the Future
2000 Onwards: Film Moves Full Circle - and the Future of Movies.
Documentaries are big business, started by the success of Fahrenheit 9/11.
Also Korean, Romanian, Swedish(Roy Andersson). Russian Ark is highlighted for its no cut style.
Avatar, Inception.


While flawed, I would still recommend watching, especially for cinephiles. Best watched as a subjective interpretation, not as a definitive history of film. If you don't care for his personal take on the subject, you may want to skip this one. Rating 4.5/5.

Agree or disagree? Have you seen the documentary, or want to see it? In your opinion, what did Mark Cousins do well, what could he have done better? Was he right to highlight obscure foreign films, or should he have stuck only to films we know? Perhaps part of the fun of watching for cinephiles is disagreeing about what should be included. As always, comments are welcome
Posted by Chris at Friday, April 25, 2014